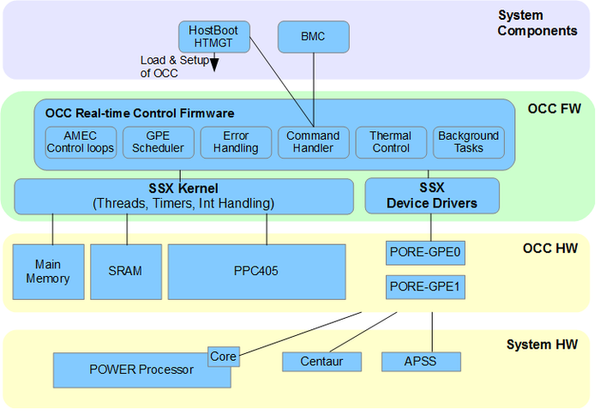 ###AMEC:### Autonomic Management of Energy Component is the heart of the OCC firmware and utilizes the capabilities of the hardware to continuously monitor temperature and power.AMEC processes system data and populates sensors (e.g. system power and processor temperature). This data is used to feed the control algorithms that make the decision of when and how to actuate. This actuation takes place via different mechanisms such as changing the maximum Pstate and memory throttling. Once a control loop has made a decision of where the system should be, it generates a vote. All votes from all control loops are then tallied and the winner gets to drive the system. In order to accommodate all these functions, a state machine regulated by time needs to be defined inside AMEC. The AMEC state machine consists of eight states that are executed on consecutive ticks, where each tick happens every 250us meaning each state will get executed every 2ms. Each state can be further sub-divided into further sub-states. For instance:

On any given tick, only one of all these sub-states will get executed. If there is a need for a longer time delay in the execution of certain functions, a given sub-state could be broken down into additional sub-states.

Functions that need to be executed on every 250us tick will be called outside the state machines.

The following diagram illustrates the flow of the state machine. 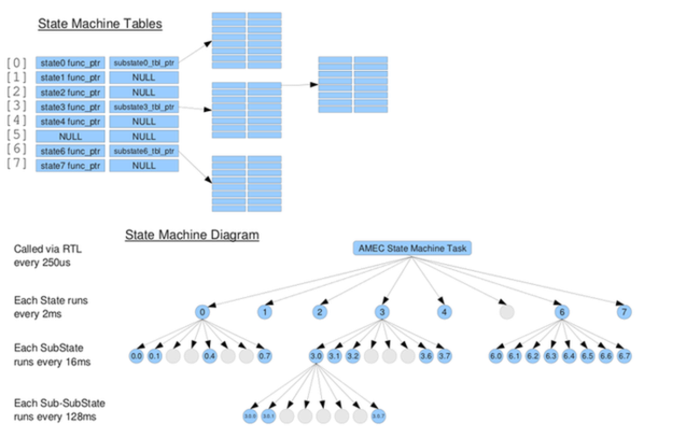 ###GPE:### General Purpose Engine programs are compiled as part of the OCC FW build by using the GNU Assembler. The compiled images will be stored in the OCC SRAM space. GPE has full access to OCC SRAM tank. GPE programs can take one 32 bit argument when they are called. This can be used to pass a pointer to a struct or any other args that need to be passed. They can run on PORE-GPE0 or PORE-GPE1. GPE0 is used to read power data from the APSS and processor core data. GPE1 is used to read memory temperatures.

The OCC is designed to have a separation of data and software. The data is sent from the MRW files by the HTMGT (Host Thermal Management) component of Hostboot to the OCC. See Hostboot Programmers Guide for more details on data driven design.

OCC firmware uses buildroot as its build infrastructure to pull in a variety of required packages such as cross compilers, flash image generators, and source code.