faasd is the same OpenFaaS experience and ecosystem, but without Kubernetes. Functions and microservices can be deployed anywhere with reduced overheads whilst retaining the portability of containers and cloud-native tooling such as containerd and CNI. 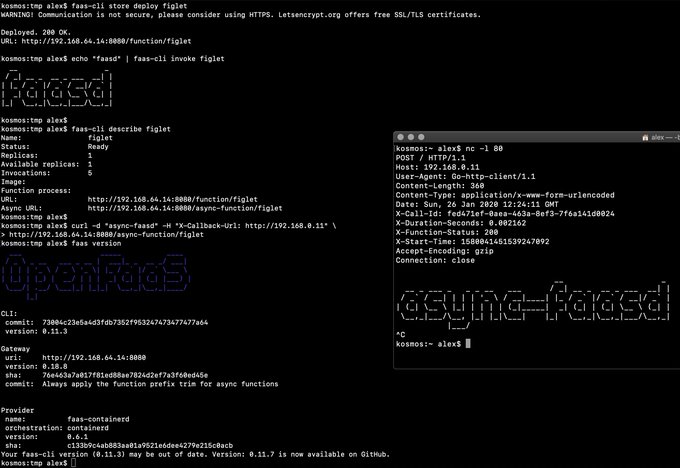 Demo of faasd running in KVM

You can use the standard faas-cli along with pre-packaged functions from the Function Store, or build your own using any OpenFaaS template.

Get started on DigitalOcean, or any other IaaS

If your IaaS supports user_data aka "cloud-init", then this guide is for you. If not, then checkout the approach and feel free to run each step manually.

Run locally on MacOS, Linux, or Windows with Multipass.run

Get started on armhf / Raspberry Pi

You can run this tutorial on your Raspberry Pi, or adapt the steps for a regular Linux VM/VPS host.

Automate everything within < 60 seconds and get a public URL and IP address back. Customise as required, or adapt to your preferred cloud such as AWS EC2.

A note on private repos / registries

If you'd like to set up your own private registry, see this tutorial.

Beware that running docker login on MacOS and Windows may create an empty file with your credentials stored in the system helper.

Alternatively, use you can use the registry-login command from the OpenFaaS Cloud bootstrap tool (ofc-bootstrap):

The file will be created in ./credentials/

You can view the logs of functions using journalctl:

The OpenFaaS docs provide a wealth of information and are kept up to date with new features.

For templates built by the community see: faas-cli template store list, you can also use the dockerfile template if you just want to migrate an existing service without the benefits of using a template.

An active community of almost 3000 users awaits you on Slack. Over 250 of those users are also contributors and help maintain the code.

Scale from and to zero is also supported. On a Dell XPS with a small, pre-pulled image unpausing an existing task took 0.19s and starting a task for a killed function took 0.39s. There may be further optimizations to be gained.

Other operations are pending development in the provider such as: