This gem provides an executable and a library for sending radio frequency commands from a Raspberry Pi connected with a 433.920 MHz transmitter to one or more sets of Home Collection Remote Control Christmas Lights (Product #151-3478-6). I have only tested it with the C9 light set, it might work with the C6 light set too.

The gem should be compatible with any Raspberry Pi that has GPIO pins. It has been tested with a 433.920 MHz FS1000A module (pictured below) for Arduino/Raspberry Pi compatible devices. It will not build on MacOS as epoll is only supported on Linux. 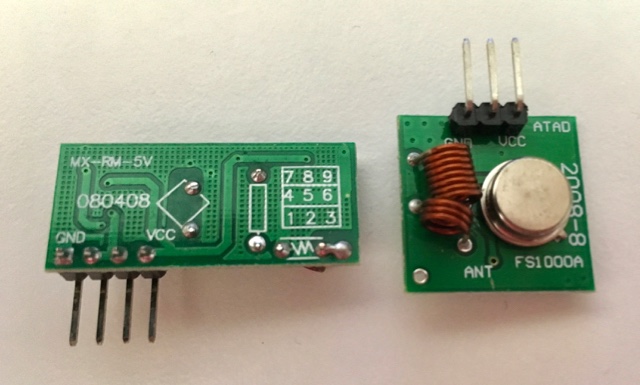 You can use this gem in two ways, as a Ruby library or as an executable.

Using the executable from the command line allows you to quickly test the library. After installing the gem, the pi-lights-control binary will be available in your gem bin path.

The --pin argument is mandatory as all the commands need to know which pin to control. The off, on commands should be self-explanatory.

The sync command will send a code that resets all lights to the same state.

The program command has multiple sub-commands:

Remember to send the --pin argument!

Alternatively, you can build applications that integrate this library.

The Command class sets up a single GPIO pin as the output control for a transmitter. It is initialized with the Pin number (defaulting to board numbering). It also supports BCM pin numbering.

The Command class will default to repeating codes six times, as that was a reliable count used in testing. You can however change it:

Turning the lights on or off can be accessed using simple commands:

Synchronizing lights will cause any light sets that receive the command to reset to a default state, ensuring all lights are in a "fresh slate".

There are eight different programs that can be configured for the lights.

Bug reports and pull requests are welcome on GitHub at https://github.com/openfirmware/pi-lights-control. This project is intended to be a safe, welcoming space for collaboration, and contributors are expected to adhere to the Contributor Covenant code of conduct.