Open Lowcode framework allows to build quickly an application. An application is made of different modules. A module is composed of coupled data objects. A data object is made of “bricks”: fields and properties.

When a data object is defined, the Open Lowcode framework will build automatically all the action and pages necessary for the application to work. Just define your data objects, and you get a working application. Open Lowcode uses a three-tier architecture with:

To develop an Open Lowcode Application, you need a java project with the following content

In your IDE, for every application module, the following folders will be used. In the example below, the module path is defined as bugkiller.app. An application is made of:

Automatic generation is launched for a package by running the java class Module ( org.openlowcode.design.module.Module ) with as a unique argument the class of your module model (e.g. bugkiller.model.BugKiller ).

There is a risk your module model is overwritten at code generation if it is present in the core folder of your module, and has the same class name as the module (e.g. your root folder is bugkiller.app, and your module name is Bugkiller: you should not put your model in the path bugkiller.app.Bugkiller).

A data object is declared by a command as per the example below. The name of data object has to be unique across the different packages. It is possible to specify that the data object will appear in the menu of the module by specifying “false” to the “force hide” parameter in the last argument of the definition.

When set as visible (forcehide false), the search page for the object (called 'Start With...') appears in the module menu. 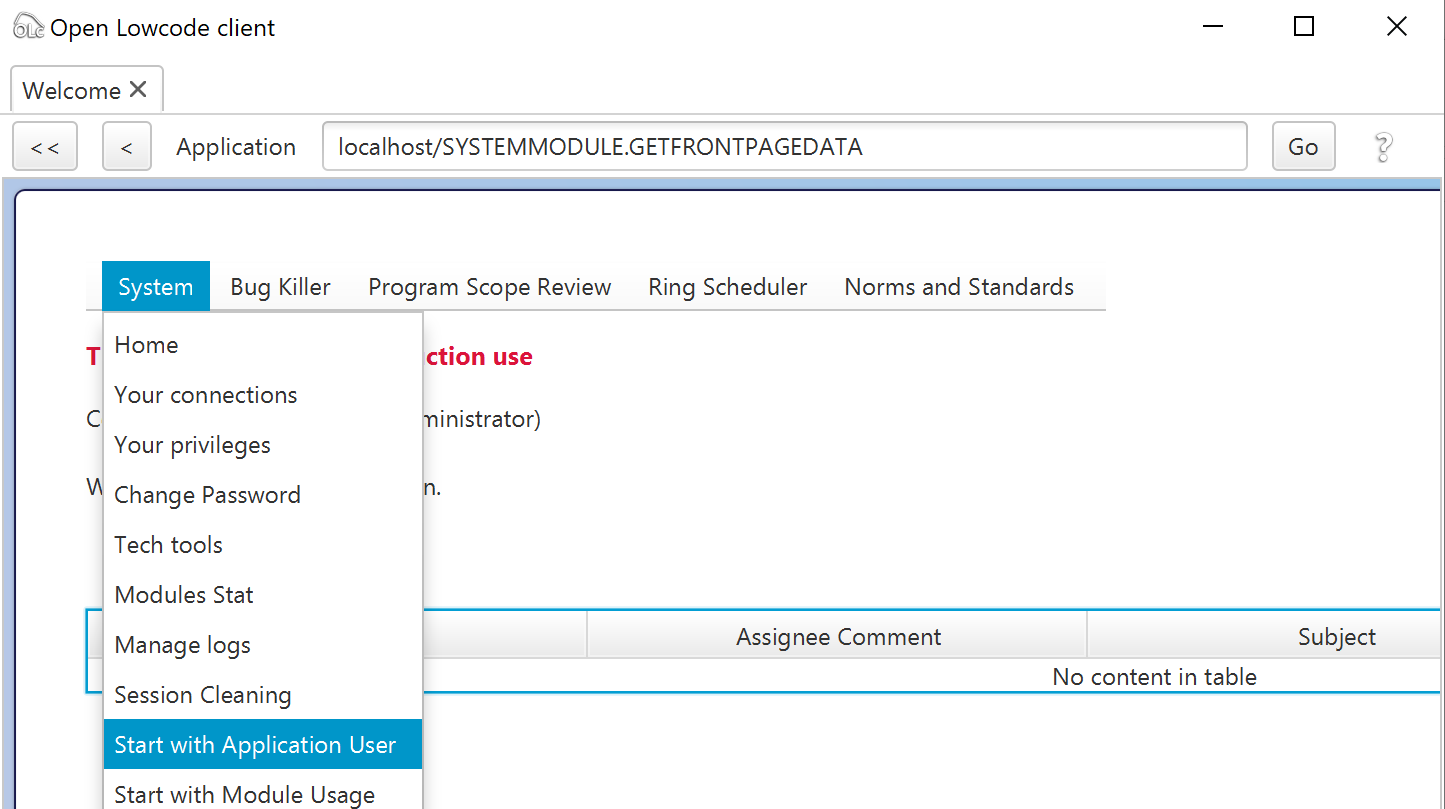 Note: a LargeBinary field is also present but should not be used directly on a data object. You should use instead the FileContent or ImageContent properties.

A property provides an object with value added features. It can be added to a data object by a command as shown below

Properties can have business rules added to precise the behaviour of the property.

The following properties are available

Note: the property genericlink should not be used directly.

The following properties are available in this area

Display elements of properties and fields are shown given a priority. Priority is a figure from -1000 to 1000, with the highest number being the highest priority. Data is displayed:

Display elements for most common properties are documented per order of priority in the table below:

Specific layout allows to specify the order and tab on which different property widgets are placed. In order to do so, thefollowing can be specified:

Privileges can be added on modules.

Privileges provide access to an action group for an authority under conditions. They are declared as the example below

Privilege can be added directly on a user defined action. The syntax is generally the same as for an action group

Privilege can be added directly on some standard generated actions. This is done by using a get...AutomaticAction static method on the corresponding property (in blue below)

The following action groups are defined on each object. They provide access to a group of standard actions generated by the Open Lowcode framework 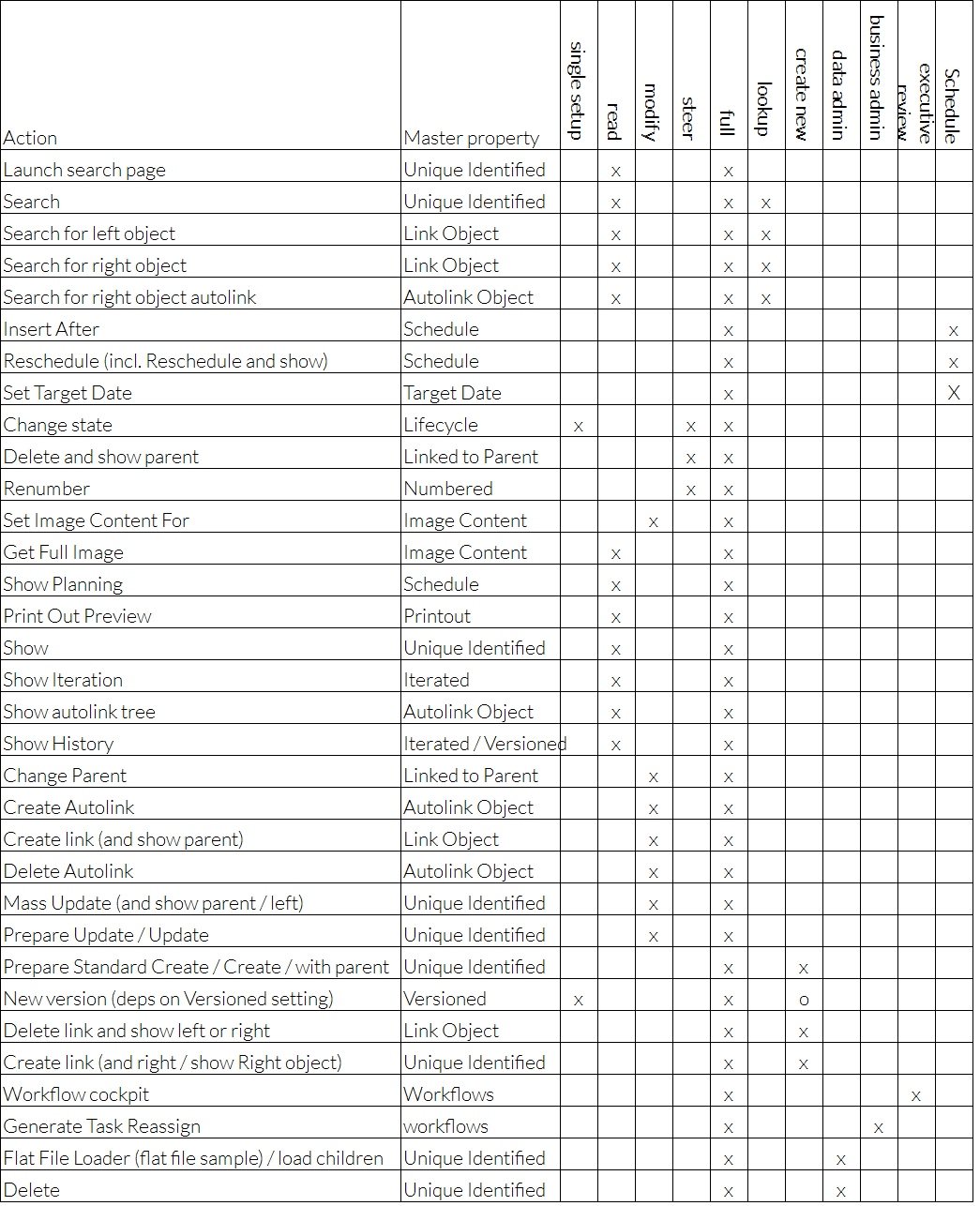 While most Open Lowcode actual application classes are auto-generated from the model files, the developer has, in some cases, to develop some logic that will be executed on the server.

While the model file is transformed to actual code, in the development mentioned below, the code written by the developer will be directly executed on the server.

Utilities are small pieces of code written by the developer to precise a behaviour.

A multi-field Constraint manages that only allowed combinations of fields are authorized.

The algorithm works as defined below:

The multi-constraint is supported for the following field types:

This utility allows to precise the valid combinations of multiple fields of the object. It is an implementation of an abstract class. The constraint is precised by implementing the addData method and adding several lines of constraints as per the sample below.

A print-out generator defines the layout of a PDF print-out for an object. It can query the necessary data (in red below), and will then generate the print-out using the Open Lowcode PDFPage library (in blue below).

A specific feature is the PDFPageBand that allows printing across several pages, with page turning managed automatically by the framework. The following primitives are available :

The table below shows an example of page band code.

A trigger is a method that is executed after an event happens on an object. A trigger is made of a Trigger launch condition, and trigger content

Triggers can be added to an object with the following conditions:

A trigger will be executed with the following conditions:

The code sample below shows how to implement a trigger. There are two methods to implement:

Actions allow the execution of logic on the server. Actions are either automatically generated or specifically developed for the application (this is called ‘specific action’ in this section). An action :

Generic actions can be defined in the model file by specifying the type of action (static: with no input attribute) or dynamic (action is given attributes dependent on context).

An action interface needs to be declared in the module model. The automatic code generation will provide an abstract action class that is then implemented by the developer. An action is declared as shown in the example below:

Action output arguments can be used:

Launch specific actions from the interface

Specific actions need to be inserted in the application, which by default consists of automatically generated pages There are several mechanisms to trigger a specific action.

A specific action (static) can be inserted in the module application menu. This is done through the following command: addasMenuAction

Note that in the example above, to get a nice label on an action, the method “setButtonLabel” can be used.

A specific action can be added in an object page (showpage action) provided it has as only input attribute the id of the object. This is done through the following command:

A static action can be added to the module menu as shown in the code sample below. This is done in 3 steps:

Adding an action to the show object button bar

Specific action classes are implementing the abstract class generated by the module automatic generation script. Their structure is as followed :

In addition to automatically generated pages, specific pages can be added to the application. Specific pages are always reached by being called by a specific action.

A page is declared as shown in the code sample below :

The code sample below shows how to define a page with 3 sections:

Open Lowcode follows strict semanting versioning. The package may evolve weekly as new features are added and bugs are fixed for current customers. This may result in several minor versions or patches per month. Minor versions follow strictly backward compatibility so you should be able to upgrade to new minor versions smoothly.

Automatic pages and actions may evolve in patches or minor versions to fix issues and improve ergonomics.