Modality exclusivity norms for 747 Dutch properties and concepts in Dutch: a replication of English

This repository contains all experimental data, including every respondent's survey, the final data set in Excel or CSV format, and the analysis code in R (norms.R).

The norms, which are ratings of linguistic stimuli, served a twofold purpose: first, the creation of linguistic stimuli (see also Speed & Majid, 2017), and second, a conceptual replication of Lynott and Connell's (2009, 2013) analyses. In the collection of the ratings, forty-two respondents completed surveys for the properties or the concepts separately. Each word was rated by eight participants on average (see data set), with a minimum of five (e.g., for bevriezend) and a maximum of ten ratings per word (e.g., for donzig). The instructions to participants were similar to those used by Lynott and Connell (2009, 2013), except that we elicited three modalities (auditory, haptic, visual) instead of five.

'This is a stimulus validation for a future experiment. The task is to rate how much you experience everyday' [properties/concepts] 'using three different perceptual senses: feeling by touch, hearing and seeing. Please rate every word on each of the three senses, from 0 (not experienced at all with that sense) to 5 (experienced greatly with that sense). If you do not know the meaning of a word, leave it blank.'

These norms were validated in an experiment showing that shifts across trials with different dominant modalities incurred semantic processing costs (Bernabeu, Willems, & Louwerse, 2017). All data for that study are available, including a dashboard (in case of downtime of the dashboard site, please see this alternative).

The properties and the concepts were analysed separately. Properties were more strongly perceptual than concepts. Distinct relationships also emerged among the modalities, with the visual and haptic modalities being closely related, and the auditory modality being relatively independent (cf. Lynott & Connell's data for English. This ties in with findings that, in conceptual processing, modalities can be collated based on language statistics (Louwerse & Connell, 2011).

The norms also served to investigate sound symbolism, which is the relation between the form of words and their meaning. The form of words rests on their sound more than on their visual or tactile properties (at least in spoken language). Therefore, auditory ratings should more reliably predict the lexical properties of words (length, frequency, distinctiveness) than haptic or visual ratings would. Lynott and Connell's (2013) findings were replicated, as auditory ratings were either the best predictor of lexical properties, or yielded an effect that was opposite in polarity to the effects of haptic and visual ratings.

The present analyses and further ones will be reported in a forthcoming paper. All data and analysis code for the norms are available for re-use under a CC-BY licence, provided acknowledgment of the following publication:

This study is a cross-linguistic, conceptual replication of Lynott and Connell’s (2009, 2013) modality exclusivity norms. Their English properties and concepts were translated into Dutch, then independently tested as follows. Forty-two respondents rated the auditory, haptic, and visual strength of those words. Mean scores were then computed, with a high interrater reliability and interitem consistency. Based on the three modalities, each word also features a specific modality exclusivity, and a dominant modality. The norms also include external measures of word frequency, length, distinctiveness, age of acquisition, and known percentage. Starting with the results, unimodal, bimodal, and tri-modal words appear. Visual and haptic experience are quite related, leaving a more independent auditory experience. These different relations are important because they may correlate with different levels of detail in word comprehension (Louwerse & Connell, 2011). Auditory and visual words tend towards unimodality, whereas haptic words tend towards multimodality. Likewise, properties are more unimodal than concepts. Last, the 'sound symbolism' hypothesis was tested by means of a regression: Auditory strength predicts lexical properties of the words (frequency, distinctiveness...) better than the other modalities do, or else with a different polarity. 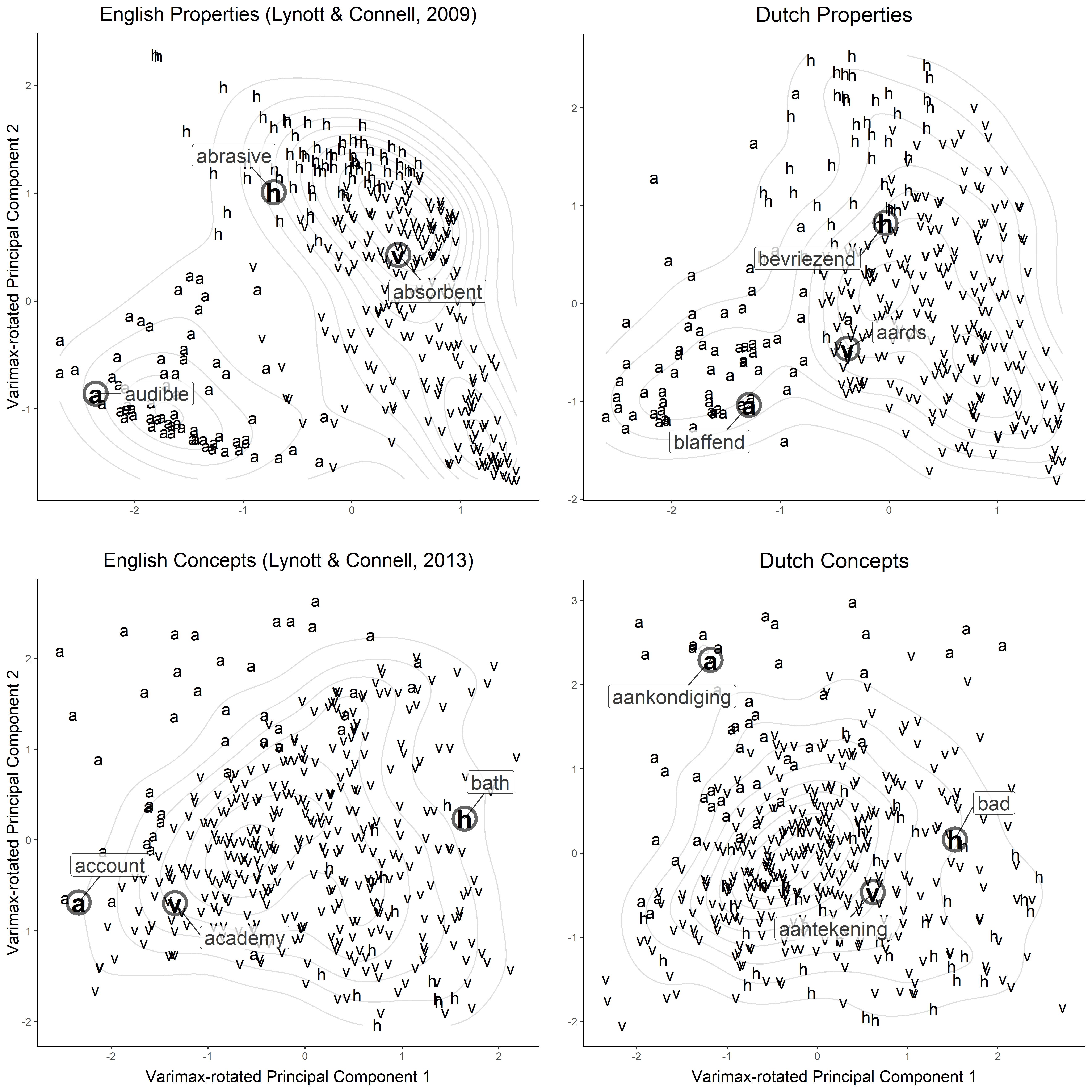