Program used to translate messages received in Dota 2 and show them in-game.

Ever been in a game with a team insisting not to speak English? It might start good, but the lack of basic communication will eventually make it very hard to win later in the game. Dota 2 Translator is a free add-on program that elimates the language barriers in Dota 2 by automatically translating incoming chat messages, displaying them ingame into your native language. This program aims to create a more pleasant experience when not playing with pre-made teams.

The addon works by intercepting network traffic, parsing the data stream for incoming chat messages which are then in turn translated using Google Translate into which ever language you choose. The results can be displayed within the application or integrated into the game client using a DirectX 9 overlay which is automatically scaled to match the current display resolution.

It won't trigger any false VAC reports as it does not hook into the Dota 2 network handler but instead works at a lower level (link-layer) that the application which in turn runs ontop of. This method of data inception, for the purpose of language translation been blessed by the anti cheat/hack team at Valve as being above board. i.e don't worry about it :) 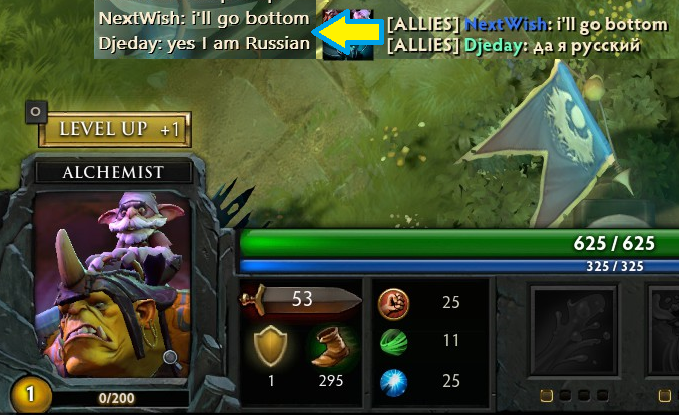 Download and install this package, upon first launch it update to the latest version. From then on, future launches of the addon will check for updates upon startup, notify you of updates and confirm with you before installing any updates.

This program has not been "signed" - which means that antivirus programs and windows 8 smart screen may display a confirmation of "Continue execution" upon application startup - please select the "confirm/yes" option on this dialog. If you are concerned about this you are totally free to review the application source code, built it yourself and make changes as the addon is open-source under the very liberal MIT license.

In order to build Dota 2 you must install Visual Studio 2010 (express version works) and the SlimDX SDK.

There is a solution file called Dota2ChatDLL.sln which contains all the projects, open it with Visual Studio and run through this checklist:

Program used to translate messages received in Dota 2 and show them in-game.