Slide is an algorithm/approach for conflating vector data with raster data. The idea is to take a coarse approximation to the raster data and have the algorithm slide the polyline to the "image." The result is a properly sampled vector polyline matching the contours of the raster data.

The algorithm is presented as a Go (golang) library. The examples directory has some example integrations. Most of the heavy geometry stuff is done with go.geo, a go geography/geometry library.

Slide supports the concept of surfacers that can be based on any datasource.

Slide was first developed as a tool to slide Open Street Map map geometry to the Strava Global Heatmap dataset. The 200,000,000,000 Strava GPS points were bucketed by pixel to create the heatmap and essentially creating a raster like density distribution of GPS data. For more information take a look at the links below:

**Above:** The black polyline is being "slided" to the green path, matching the Strava global heatmap data. Red lines are the intermediate steps of the refinement.

At a high level, Slide works by modeling an input line, or string, sliding into the valleys of a surface. The surface can be built from any datasource.

One can imagine a coarse input "string of beads" being placed on the surface and letting gravity pull it downward. When movement stops, the string should follow the valleys.

To mimic the flexibility of a "string of beads," or something similar, the input line is resampled. This allows the discretely sampled line to still behave like a naturally flexible object.

This resampled line is then ran through a loop where each vertex or point is corrected based on a cost function. This cost function has 3 main parts:

The components are weighted with the surface getting the most. The other parts are to ensure the line doesn't collapse in on itself and maintains some sense of rigidity. To speed conversion of the process, a momentum component is added where a fraction of the correction from the previous loop is added in.

Once the process converges, the line is simplified again and sent back as the result. 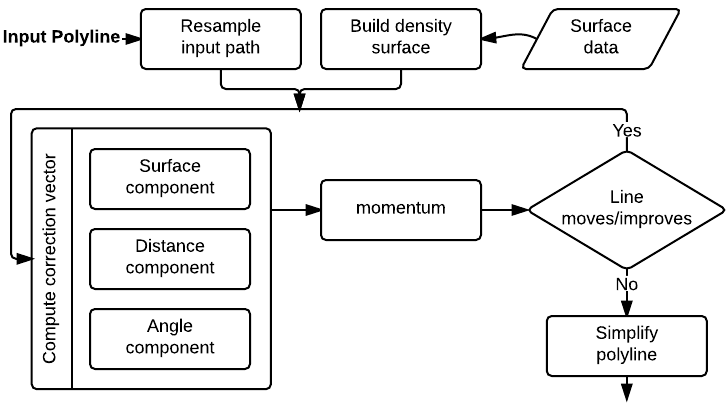 Many! There are the basic things like improving the cost function weightings as well as more challenging things such as incorporating more information from the input data, such as direction. I'd also like to support the sliding of more complex goemetries, such as a road grid.

As they say, "There is nothing new under the sun."