ripr is a tool that helps you rip out functionality from binary code and use it from python. It accomplishes this by pairing the Unicorn-Engine with Binary Ninja. Currently, x86, x64, and arm are supported and work to a reasonable degree.

Reimplementing functionality is a common, often time-consuming, and sometimes arduous process that comes up frequently during reverse engineering. A few examples:

ripr attempts to automatically generate a python class that is functionally identical to a selected piece of code by statically gathering sufficient information and wrapping it all into a "harness" for the unicorn emulator.

For some concrete examples (that are much easier to grok), check out the sample folder!

The basic process is simple and looks like this:

Note ripr assumes your python installation is located at C:\Python27. If this is not the case, change the location as appropriate inside gui.py.

From within Binary Ninja, right click anywhere inside of a function and select [ripr] Package Function. After packaging, a table will appear listing all of the "packages" you have created with ripr during this session: 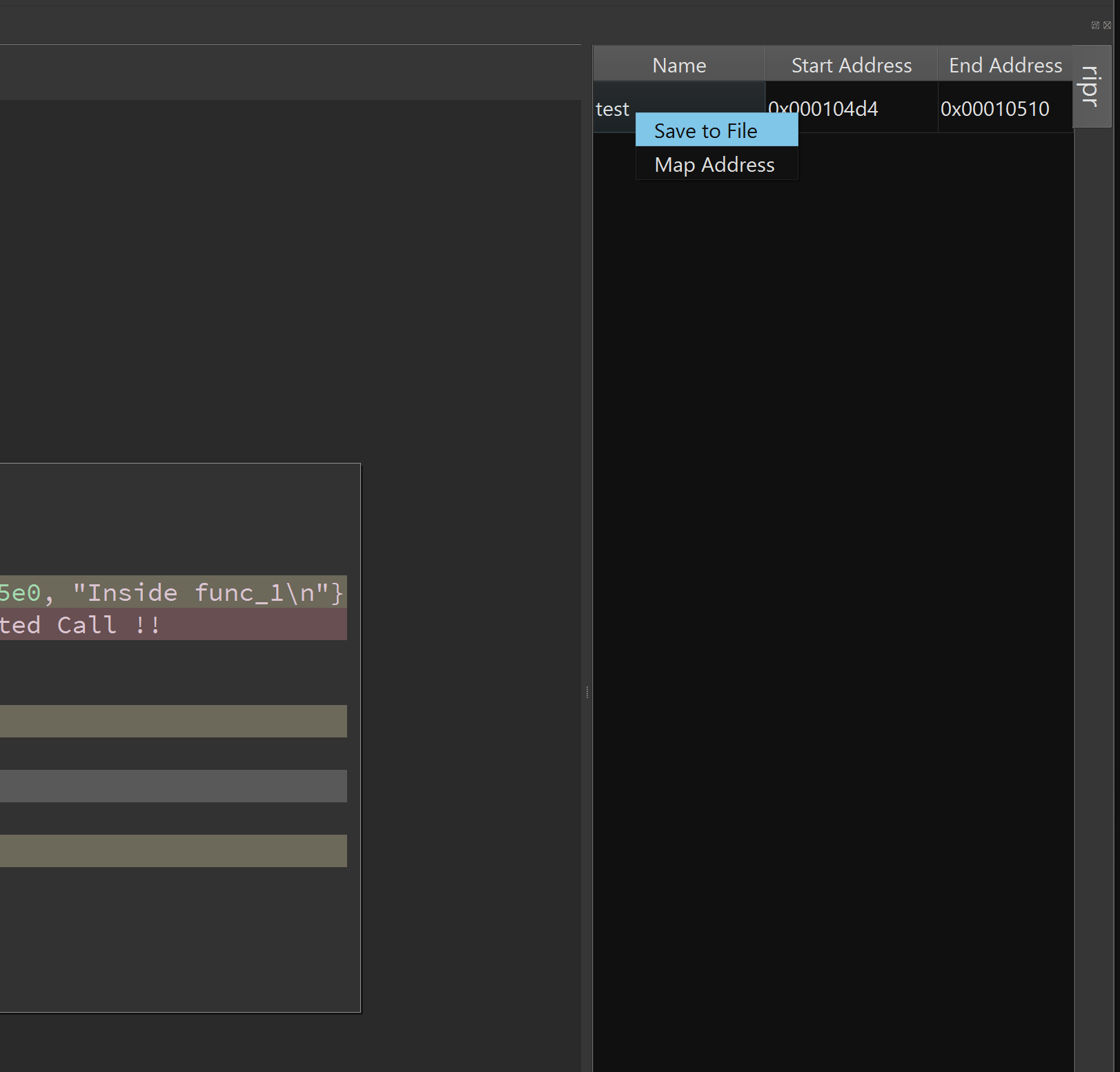 If you've followed step 3 in the installation instructions, run .(ripr 0x1234) (with 0x1234 replaced by the address of the function). Otherwise, you can manually invoke ripr with #!pipe python /absolute/path/to/ripr/r2pipe_run.py 0x1234.

You can also choose to only package specific basic blocks rather than the entire function.

Select any instruction inside the basic block of interest, and from the right click menu, choose [ripr] Package Basic Block. Repeat this for any other basic blocks you want to gather.

Finally, select Generate Selected BBs from the context menu to have ripr generate output for them.

ripr will contextualize code you've selected for packaging within the GUI.

This is meant to give the user visual cues about what ripr has seen and automatically identified, making it easier to see "right off the bat" whether manual modification of the package is necessary.

There are a few different prompts which may appear while packaging a function.

Code contains calls to Imported Functions. How should this be handled?

Choosing "Hook" will allow you to write-in your own functionality that runs in lieu of imported functions. Selecting "Nop out Calls" will replace the call instruction with a series of NOPs.

Target code may depend on outside code. Attempt to map automatically?

Your selected code contains calls to other functions within the binary. Answering yes will automatically map those functions.

Once a selection of code has been packaged, you will have a python class which encapsulates its functionality. The basic process of using it looks like this:

Assuming my_ripped_code is the class name:

All Unicorn functionality is exposed via the mu attribute and should work as expected.

If you choose to hook calls to imported functions during the packaging stage, your generated class will contain stub-functions that are called when the imported call would originally have been called.

For example, if your code contained calls to puts and malloc, the following would be generated in your class:

Any code you write within these functions will be called in lieu of the actual imported call. If you wanted a reasonable approximation of puts (and were emulating x64 code), you could do:

You have full access to all of Unicorn's methods via the mu attribute so it is possible to update the emulator context in any way necessary in order to mimic the behavior of a call or perform any actions you'd like instead of the call.

ripr has some support for automatically generating "argument aware" output. When information about a function's parameters is available to Binary Ninja, ripr will generate its run functions in the form:

When dealing with non-pointer types, your arguments will be written into the expected location in the emulated environment.

For "single depth" pointers, (e.g char *, int *), ripr will map memory, copy your argument to it, and place the address of that mapped memory into the appropriate location.

For pointers with a depth greater than 1, ripr falls back on default behaviour.

If you need to manually set up arguments, you can directly manipulate unicorn's state via the mu attribute. For example, assuming you are emulating a 32-bit x86 function, you could do the following:

The current tests will package up some functions across the 3 supported architectures found in the sample folder.

To run the tests: