Parfait is a performance monitoring library for Java which extracts metrics and makes them available in a variety of ways (including JMX beans and the open-source cross-platform Performance Co-Pilot).

For a rapid deployment, the parfait-agent can be used in unmodified applications using the Java "-javaagent" command line option.

This mode uses many of the parfait modules described below, internally, so that you don't have to use the API right away. It accesses JMX and other metric values available from within the JVM and exports those as PCP Memory Mapped Value (MMV) metrics. This instrumentation mechanism is designed for use in production applications - it is proven, robust and very lightweight.

To build the standalone parfait-agent module, the Maven build contains an extra step:

Install to a well-known place:

Ensure the target directory for memory-mapped files has been created according to the security model you wish to use.

Then, to run an application with the parfait-agent loaded:

Or use the helper script provided:

New PCP mmv metrics will then appear automatically for the duration of the instrumented Java application - these metrics can be recorded, charted, used for automated live and historical analysis, and so on, using PCP tools.

The Layers of parfait

parfait is, like an ogre, made up of many layers. parfait provides several modules assisting with the various stages of metrics collection and performance monitoring (integration, collection, output), and each module is a separate Maven subproject (and hence, separate .jar artifact). The following diagram illustrates the provided core modules, along with their key responsibilities and some interactions between them: 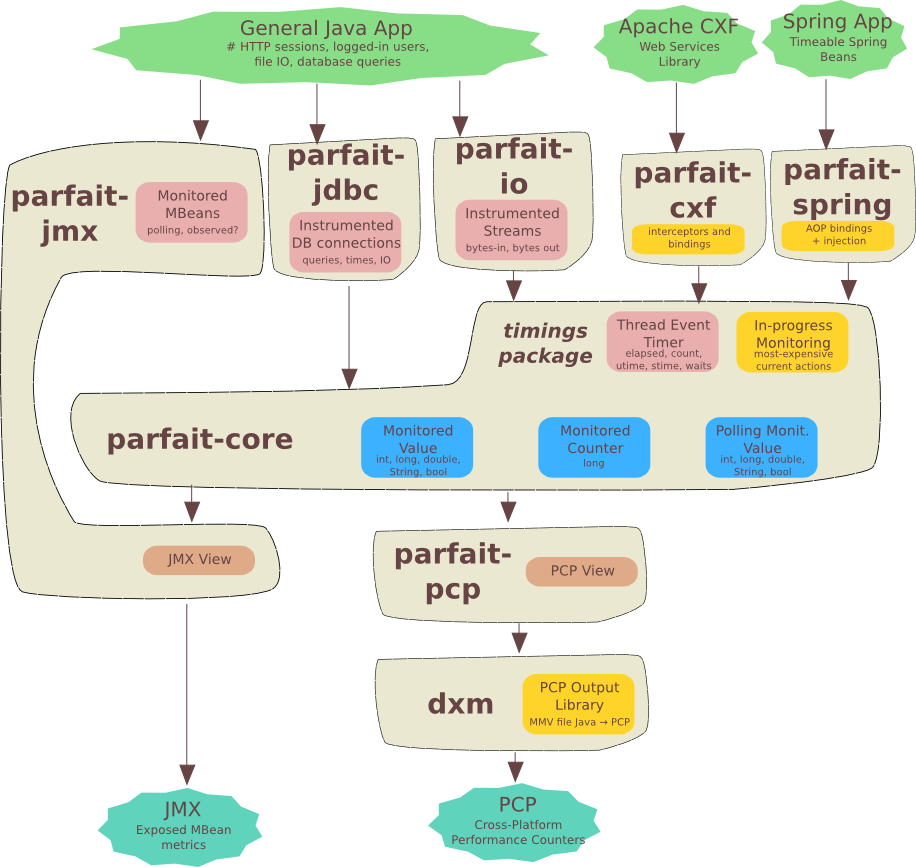 parfait-core is the main module of parfait. Fundamentally, it defines two things: a set of basic types used to encapsulate monitored values (such as the number of active user sessions, total database query execution count, and so on), and a very simple output mechanism for same. This provides a simple, powerful, and flexible way of collecting values from a variety of sources and collating them to different monitoring systems.

The most important class in parfait is Monitorable. This encapsulates all the key metadata for an observable monitored value, and can be used by the various output subsystems to display, log, or otherwise use the value in an appropriate way.

A Monitorable has a few important key properties:

In reality, it is unlikely that you will need to implement Monitorable directly. There are a few simple classes which cover the vast majority of your needs:

A MonitoringView is the bridge between the core parfait libraries and the various possible output mechanisms.

A particular parfait output library will typically implement its own MonitoringView, which is responsible for initializing the monitoring output and being notified (via a Monitor) of any changes to the Monitorable objects it obtains from the provided MonitorableRegistry.

All binary versions of parfait are synced to the Maven central repository. If you're using Maven for your project, you can automatically add dependencies to your project with no further configuration required. For example, to include the parfait-core library, simply use the POM snippet:

If you are not using Maven for your project, the JAR files (including source and Javadoc) may be downloaded from the appropriate subdirectory of the repository's parfait folder.