NanoMap is an algorithm and data structure that enables uncertainty-aware proximity queries for planning. 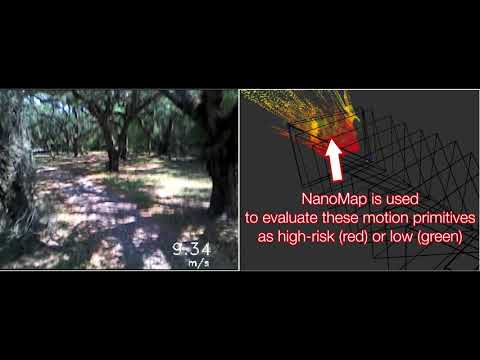 Key features of NanoMap include:

Then there are two examples of minimal nodes, one is for benchmarking and performs queries:

The other shows how to use the nanomap_visualizer:

This ros node has been tested on:

NanoMap is particularly fast for low amounts of motion planning queries (< ~10,000), due to its low data structure build time. Fusion-based voxel structures take longer to build but have faster query times, causing them to be faster for > ~10,000 queries. Nanomap is two to four orders of magnitude faster than these other benchmarked packages at rebuilding its data structure upon receiving updated pose history information. (On single-core of an Intel Skylake i7. Error bars are shown as standard error of the mean. Docker image with all packages buildable inside provided: https://hub.docker.com/r/flamitdraper/mapping/ )

The PCL dependency is minimal. It only uses the pcl::PointCloud<pcl::PointXYZ>; does not use any algorithms. It would not be hard to replicate this type and remove the PCL dependency. Would gladly merge that PR, PCL is a fantastic library, but is not really used here.

The core of the code has no depdency on ROS. The only parts that have ROS dependencies are the visualization components, and the example node:

I have provided this as a ros package since that is how it has been used and tested. If you would like to use this without ros, it would just need a ros-independent CMakeLists.txt / incorporate into other build system.

The top of nanomap_types.h has #define NANOMAP_DEBUG_PRINT false. Changing this to true turns on potentially useful debug prints.

A particularly useful debug print is in NanoMapDebugPrintState() in nanomap.cc. Often I will turn the first line of this function to if (1) in order to print regular status.