Fake XRandR configurations for multi-head setups with crappy video drivers, like fakexinerama but with xrandr

This is a tool to cheat an X11 server to believe that there are more monitors than there actually are. It hooks into libXRandR and libXinerama and replaces certain, configurable monitor configurations with multiple virtual monitors. A tool that comes with this package can be used to configure how monitors are split.

This tool used to only work with XRandR, but I found it useful to add Xinerama emulation. It can be readily removed if it isn't needed though.

Note that this tool right now only works for legacy Xlib applications. Applications using xcb will not work. See issue #22 for progress on xcb support.

Also note: With xrandr 1.5, this library shouldn't be needed anymore for most users. xrandr has an abstraction for "monitors" now which should work out of the box, at least with applications written using one of the big GUI frameworks.

You'll want to use this library if you have a multi-head setup, but a crappy video driver which tells RandR that there is only one big monitor, resulting in wrong window placement by window managers. Matrox Tripple Head 2 Go et al. are other candidates, where there really is only one big monitor, but you'd want to split it anyway. Another use case is to test multi-head behaviour without having multiple monitors.

You may use, redistribute and modify this program under the terms of the GNU General Public License (GPL) Version 3, in the version available under the URL http://www.gnu.org/licenses/gpl.html#.

In most cases, simply run make, then install using make install. This will determine where the library should be installed and where the originals reside. Pay attention to any warnings/errors from the configure script. To compile the library, you will need the XRandR and X11 development packages for your distribution.

In case of Ubuntu, install the following prerequisites:

After installation, use the fakexrandr-manage tool to create a configuration (in ~/.config/fakexrandr.bin).

For Arch Linux, there is a PKGBUILD (git) by Philipp Schmitt.

If you need FakeXRandR for another use case or the automated building does not work for you, here are some details:

The configure script creates a config.h header with the path to the system's real libXrandr.so file and a path which preceeds that of the real library in the ld search path, where the FakeXRandR should be placed. You can use ldconfig -v to get a list of suitable directories, if configure should fail to determine one.

The libXrandr.c file only contains a initialization function which loads the symbols from the real library and implementations of the functions that we actually override and which require more than replacement of XIDs for fake screens with real the one's. All other functions are automatically generated by make_skeleton.py from the default Xrandr header file.

After installation, you have a tool fakexrandr-manage available. It starts a GUI if you have PyGObject installed and falls back to a command line interface elsewise. You can manually use the CLI if you run fakexrandr-manage help. In the GUI, use the select box at the top to choose an output that you want to split and click "Create". It will be identified by its resolution and EDID, which is a device specific identifier. A monitor will be drawn below. 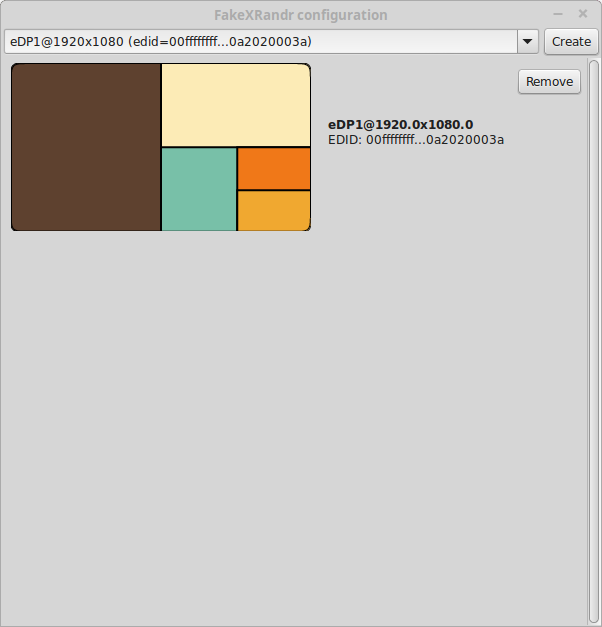 You can add splits by drawing horizontal and vertical lines with your mouse. To split an output into top and bottom part, draw a horizontal line, i.e. use your mouse like you would use scissors to cut a sheet of paper. You can move existing lines with the left mouse button, and remove them by right-clicking. When you close the configuration tool, you will be asked whether you want to save the altered configuration. Other programs, including your window manager, might need to be restarted before they begin to use the new configuration.

Fake XRandR configurations for multi-head setups with crappy video drivers, like fakexinerama but with xrandr