NOTE: This project is no longer actively maintained, if I come back to it there's a lot of things I'd do better the second time around.
For now I recommend using it for small toy projects and tests only, not in a production situation or as a dependency in a package you release to other people.

The mesh-networking library is to the network what FUSE is to filesystems.
It lets you simulate network interfaces and programs and direct traffic between them in any topology you like.

This is a library to help you create and test simulated network topologies. It provides some simple building blocks like "Nodes", "Links", and "Filters" which help you build simulated networks on a single computer, or real networks across any number of machines.

It's intended both for mesh network simulations on a local machine, and connecting programs across networks in real life. In a recent project, we used it as the peer discovery and communication layer for a storytelling blockchain project. It works very well with scapy for building and testing network protocols or networked apps.

Scapy helps to build higher level network protocols, but it provides no utilities for simulating different lower-level network layouts.* Thats where mesh-networking comes in, you can create virtual machines with interfaces between them, script them to send and receive, and dynamically change the shape of the network while nodes are connected.

This library provides some simple primitives to represent different pieces of the network stack. Each layer is implemented as a thread with an in and out queue with some pure functions that dictate how traffic moves forward.

A Node (a computer) is a network connected device that can run Programs and accepts traffic via Filters (like iptables) and Links (like network interfaces).

Using these simple building blocks, you can simulate large network topologies on a single machine, or connect several machines and link nodes on them using real connections channels like ethernet, wifi, or even IRC.

You could theoretically use this in production to build a virtual network on top of some physical links, but it's written in python so I don't recommend using it for anything performance critical.

An example use case is building a small chat network, where you want nodes to auto-discover each other on a LAN and be able to chat in a room.

Set up a secret chat that auto-discovers all peers on your LAN:

Simulate a larger network with randomized connections between nodes:

To get a feel for the API and capabilities, you can read the source and run some more intricate examples. Note that all examples require python3 to run, even though the library itself is compatible with python2. 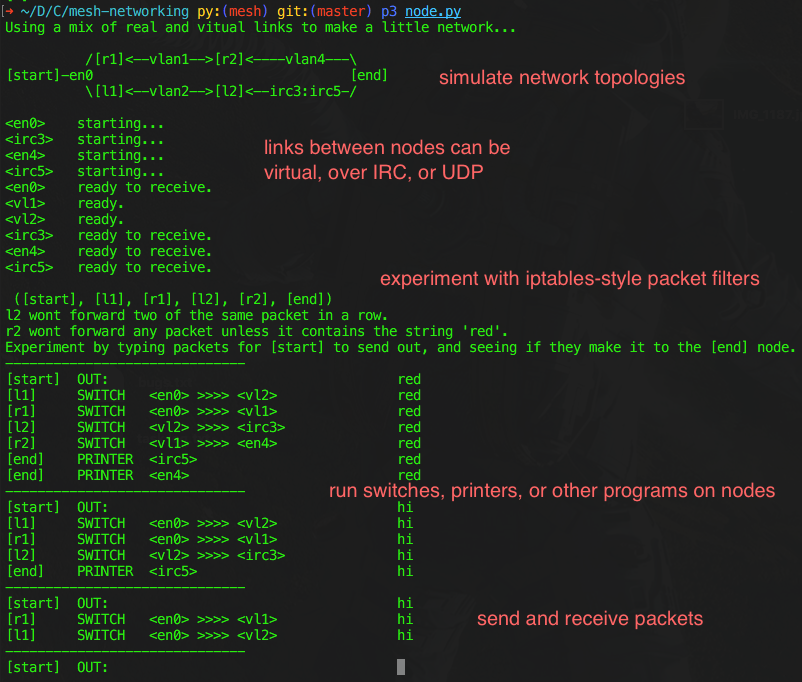 This project allows you to build networks of nodes in Python, and send traffic between them over various physical layers.

For each of the highlighted words you can look in the corresponding file for its code, e.g. filters.py.

Q: Why is this library called mesh-networking and not py-networking or something like that?

A: The original goal of this project was to build a testing framework in order to work on developing a general mesh-network routing system that is secure, decentralized, and fast. I since decided to release this library as a general networking utility, and to work on the mesh routing stuff in a separate project.

Several components were copied from the OSI networking model, but used in different ways than they are now (IPV6, ARP). Other parts will have to be completely re-written (routing, DNS).

The first step is to create an abstact representation of nodes in the network that allows us to test our protocol, you will find this in node.py, and a controller that can spawn multiple nodes in multinode.py. You can link nodes to each other using real or virtual network interfaces.

The second step is to agree on a common protocol for MESHP, and begin designing the routing algorithm between multiple computers. With a common spec to work off, we wont be limited to working in python. We can write clients in go or C in order to test different subtleties of the namecoin blockchain system and the meshp+mesharp routing systems.

For now, we use UDP broadcast packets to simulate a raw Ethernet BROADCAST-style connection between two nodes. The UDP header and ethernet frame are stripped on arrival. In the future, I'd like to write a wrapper around snabbswitch that allows us to directly manipulate network interfaces.

The source and desination address information is stored in the MESHP header, and is read by meshpd whenever they hit tun0.

TUN (namely network TUNnel) simulates a network layer device and it operates with layer 3 packets like IP packets. TAP (namely network tap) simulates a link layer device and it operates with layer 2 packets like Ethernet frames. TUN is used with routing, while TAP is used for creating a network bridge. Packets sent by an operating system via a TUN/TAP device are delivered to a user-space program which attaches itself to the device. A user-space program may also pass packets into a TUN/TAP device. In this case TUN/TAP device delivers (or "injects") these packets to the operating-system network stack thus emulating their reception from an external source.

The more existing pieces of the existing internet framework we can use, the easier it'll be to keep the real internet and our meshnet compatible:

Our mesh protocol comes in and replaces the IP layer, leaving the other layers intact. The only other manipulation required to get it working is access to the kernel's routing table, allowing us to route traffic in the right direction.

Mac OS X does not allow you to read raw frames easily from a network interface. On linux you can open a raw_socket and read to your heart's content:

On a Mac (or any FreeBSD-based system) this doesn't work because the AF_PACKET socket is not available. It's possible to sniff packets going by using something like pcap or the BPF/tcpdump, but I don't believe it's possible to intercept them (correct me if I'm wrong here).

We're forced to specify a port to bind to by python's sockets, but we are able to share a port between multiple processes using SO_REUSEPORT, which is very cool. This allows two clients to both receive packets sent to that port. setblocking(0) is for convenience (just beware, you have to do some error handling to check if the socket is ready to read or write).

I've had the best success so far with libdnet (rather than scapy or pypcap). dnet stands for "dumb networking", and that's exactly what it is. It's a stupid-simple api to access raw sockets and network interfaces. dnet.iface('en1').send('HI') will literally write "HI" to the network interface (with no ethernet frame, no IP header, to TCP header, just 'hi'). In fact, you can use this to DDoS individual people, or your entire local network. Just run it in a while True: loop. The stream of meaningless malformed packets caused the wifi connection at hackerschool to slow to a dead stop within seconds. The full code for this style of attack can be found in bring_it_down.py.

Another issue I recently discovered is that most higher-end routers will cap broadcast UDP transmissions to their lowest possible transmit rate, to prevent flooding the LAN with traffic. This is to encourage devs to use proper multicast so packets can be directed only to interested receiving parties, instead of sending every packet to every LAN receiver. See this [Network Engineering Stack Exchange question] question](http://networkengineering.stackexchange.com/questions/1782/why-does-my-udp-broadcast-wireless-communication-is-capped-at-1mbs/) for more information about broadcast UDP transmit rate capping.

As I mentioned above, you can allow multiple processes to connect to the same socket on the same port, and they all recieve a duplicate of every packet sent to that socket. This is a simple socket option, but the implications are great. Now we can have multiple clients listen on the same port, meaning to the clients this is not longer a port, it's simply a broadcast interface. Every client gets every packet. Every client processes every packet, and filters out everything it doesn't care about.

Another cool thing is that you can create a virtual, virtual network interface that behaves like a real one in python. The setup below allows us to write and recieve broadcast UDP packets to any interface. In order to simulate our mesh networking protocol (which is at the IP layer, one level below UDP), we are going to simply cut off the IP, and UDP headers of every packet we recieve. Since UDP allows us to do broadcast networking, we can simulate being at the ethernet level on the same hardware link as another computer by pretending we arent getting any help with routing from the system through IP and UDP. We can then tack on our own routing protocol, I'm calling it "MESHP" for lack of a better name. MESHP extends IPv6 and allows for mesh-style adhoc packet routing, but I'll save that for another time. Below is the code for creating hard and virtual interfaces.

Since these two Link types both have the same accessor methods, we can connect our nodes up to real interfaces or fake ones, and see how they behave. Nodes connected to both a real and a virtual can pass packets between the two, acting as a bridge for all the other nodes.

Each node accepts a list of links that it is connected to. All the nodes on one link work like a broadcast ethernet. You can visualize it as a bunch of serves connected to eachother using ethernet cables colored red, green, blue, and purple. Except the red link is actually a real link, allowing you to test your nodes over wifi, bluetooth, or any other hardware interface. Green, blue, and purple allow you to simulate branches of the network on your local computer in order to test topology. The cool part about this is that it allows you to simulate a complex 350 node network using a couple of laptops connected with an ethernet cable or wifi. To view the code for the class Node, check out node.py.