A tool for early detection of broken pointcuts in evolving Aspect-Oriented software.

Pointcut fragility is a well-documented problem in Aspect-Oriented Programming; changes to the base-code can lead to join points incorrectly falling in or out of the scope of pointcuts. Deciding which pointcuts have broken because of changes made to the base-code is a daunting venture, especially in large and complex systems.

fraglight, an extension of the Mylyn Eclipse plug-in, which maintains focused contexts of entities relevant to a task, is a research prototype that recommends a set of AspectJ pointcuts that are likely to require modification due to a particular base-code change. The underlying approach is based on harnessing unique and arbitrarily deep structural commonality between program elements corresponding to join points selected by a pointcut in a particular software version. Patterns describing such commonality are used to recommend pointcuts that have potentially broken with a degree of change confidence as the developer is typing. More information can be found at the project website. The plug-in can be installed using the update site listed below.

fraglight starts working when a Mylyn task is activated for an AspectJ project. There is a preference pane that can control some of the plug-in's behaviors: 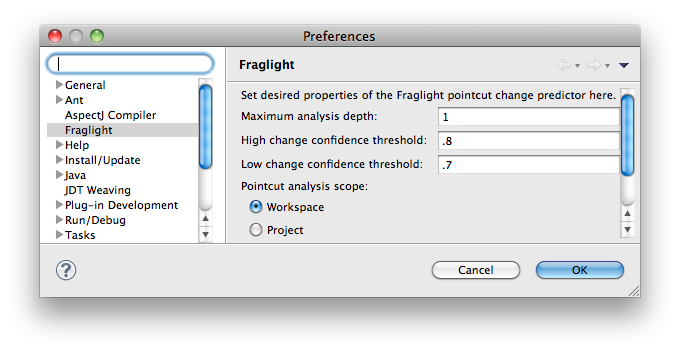 Parameter descriptions are as follows:

You may find a demonstration showing how fraglight manipulates the Mylyn context using a simple use case here.

Please subscribe to our google group for announcements. You may also join our developer discussion.

Due to a present Eclipse framework limitation, the AJDT is not able to reconcile AspectJ code without first saving it to disk. As such, our prototype implementation saves the current editor buffer every time it detects a new join point has being added. We plan to add in-memory reconciliation to the AJDT as part of issue #1 to make fraglight would be more developer-friendly.