Run (multiple) operating systems directly from image files. Add extensions, apps and configuration, which are one file each. 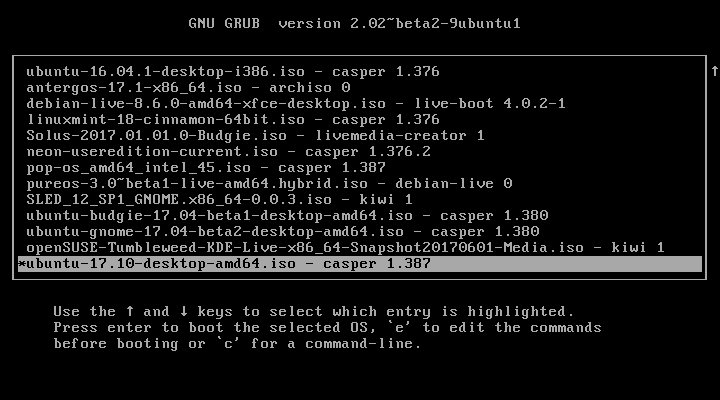 SystemImageKit lets you run Fedora, CentOS, Ubuntu, Debian, and openSUSE (based) live systems, all directly from unchanged live ISOs all stored on the same physical medium (e.g., USB drive). Currently support for the live booting systems of the mentioned distributions is built in, but the system is modular so that detection scripts for other distributions can be added relatively easily.

The following steps illustrate how to install an Operating System onto a USB drive using SystemImageKit.

In order to do this, boot Ubuntu Live system (tested with Ubuntu 14.04 LTS Trusty Tahr) and run the following script.

NOTE: All data on /dev/sdX will be deleted.

If you format the device manually and run into "error: will not proceed with blocklists", then use gparted to move the start of the first partition up 1MB. This works without having to reformat the device.

We need to do this only once. Whenever we add additional ISOs, we just have to re-run (the example is for a running Ubuntu Live system):

Today's operating sytems are hugely complex collections of various files, which are scattered on the mass storage in a way that makes it hard for end users to understand, maintain, and upgrade. Here, a way of encapsulating - and thus, making more manageable - this complexity is proposed.

An earlier paper of the same author, AppImageKit documentation, has been cited frequently, and has even made it into the Wikipedia article on distributions. However, it has focused solely on the the applications aspect. Here, a more comprehensive, and more rigorous, plan of systems architecture is described.

Today's operating systems are organized in a way that is logical for developers but not logical for end users.

Typical end users think of the contents of their computers as:

Instead, most operating systems are organized in a way that they do not confront the user with 306 files (which the user could understand) but rather with tens to hundreds of thousands of files (99% of which the user does not understand, and does not want to manage).

Some operating sytems have tried to keep the number of files manageable and understandable by the end user (e.g., early versions of the Macintosh System Software), but with the ever increasing complexity and size of modern operating systems like Unix and Windows, the number of files grew while no really useful abstractions have been introduced to help the user regain control over all these files. Instead, installers and uninstallers (Windows) and package managers (Unix) have been created. In this process, the user became increasingly dependent on these tools.

On desktop systems, files in the filesystem can broadly be categorized into

On most operating system setups, these are intermingled more or less in the same filesystem, which creates increasing complexity. Because on most setups these files are distributed througout the filesystem, it is hard to

Many of the issues above are caused by the "tight coupling" of operating system, extensions, applications, and customizations by the way of the file system. The key to resolving the issues described above is encapsulation of the logical units used in a computer system.

By setting up the operating system in a way proposed here, it is possible to achieve the above use cases easily. We define objects for the categories mentioned above as follows:

In the implementation described here, we use:

In the following paragraphs, each of these components is discussed.

We use grub2, a bootloader that is capable of booting operating systems contained in ISO image files. grub2 can loop-mount an ISO file and load the kernel and the initrd from the ISO. What happens once the kernel has control is up to the operating system. Luckily, many common operating systems (such as CentOS, Fedora, debian, Ubuntu and openSUSE) nowadays are capable of loop-mounting ISO files and continue the boot process from there (at least with a little help in the form of an additional, secondary initrd image that patches the functionality if required, e.g., for openSUSE). We use a helper script to generate the secondary initrd image. The contents of this image are loaded in addition to the contents of the original initrd image supplied on the operating system ISO.

The advantage of using the bootloader in the way described is that virtually unlimited operating systems can be booted on a computer without having to partition the mass storage.

Many common operating systems (such as CentOS, Fedora, debian, Ubuntu and openSUSE) nowadays provide readymade Live systems (originally intended to run from CD-ROM and/or DVD) which are ideal for our purpose, because they provide defined baseline sets of software that we can expect to be installed in each system. For example, if we use the CentOS 7 live ISO we know exactly the set of software included therein, and can assume this to be present on any computer running the CentOS 7 live ISO. This is important, as it allows us to simplify dependency management substantially. Also, live systems are non-persistent by default, which means that changes can be made to all aspects of the system but after a reboot, the system is back to its original condition ("stateless"). As mentioned above, some live ISOs are not designed to be booted without being burnt to a CD-ROM and/or DVD (e.g., openSUSE), but by adding a secondary initrd image we can patch the required functionality in without having to remaster the ISO.

The advantage of using live system ISO files in the way described is that operating systems can be added and removed very easily, and at each reboot the system is back to its original condition.

The advantage of using ExtensionsImage files is that every extension is one file and can therefore be intuitively managed by the user (e.g., installed, upgraded, removed, and moved to another machine).

An app often consists of a hundred files in addition to the main binary, e.g., icons, graphics, language files, and other auxiliary files. Frequently, an app also requires libraries which are not normally part of the operating system. In this case, the corresponding libraries have to be installed into the system prior to running the app. By using AppImages, all of this is abstracted by encapsulating each app with all the auxiliary files and libraries that it needs to run which are not part of the operating system.

The advantage of using AppImage files is that every app is one file and can therefore be intuitively managed by the user (e.g., installed, upgraded, removed, and moved to another machine). Also, by bundling the dependencies which are not part of the operating systems, several versions of the same app can be installed alongside, even if they require incompatible versions of dependencies.

Since the operating system is run from a live system, changes to the running system are non-persistent by default, which means that user data in $HOME is deleted whenever the machine is shut down. Hence, it is advisable to mount the $HOME directory from a persistent location, e.g., a data partition or data loopback file, or from a network share.

The advantage of using $HOME in this way is that user data is preserved between boots, while the rest of the system is in a clean state after every boot.

In the system proposed here, what does the typical end user see?

Some additional bootloader and helper files are left out here for brevity, but the total set of files to be managed is much more concise than on a traditional operating system, and in the hundreds rather than in the hundreds of thousands.

Also, "regular users" get the freedom to do things never imagined before:

The system proposed here allows not only for substantial complexity reduction by a factor of thousand, but also allows normal end users to try out operating systems and apps more easily, without having to "commit" to them (in the form of "installing"). This is done by removing the tight coupling between and by encapsulating operating systems, operating system extensions, applications, customizations, and user data. Unlike with system-level virtualization, the performace overhead involved is relatively minor.

https://wiki.archlinux.org/index.php/Multiboot_USB_drive#Workstation_live_medium GRUB2 loopback examples for many types of Live ISOs

Run (multiple) operating systems directly from image files. Add extensions, apps and configuration, which are one file each.