An implementation of Vim in Python It is a good idea to add the following to your ~/.bashrc if you really want to use it:

The editor is written completely in Python. (There are no C extensions). This makes development a lot faster. It's easy to prototype and integrate new features.

We have already many nice things, for instance:

Further, when the project develops, it should also become possible to write extensions in Python, and use Python as a scripting language. (Instead of vimscript, for instance.)

We can also do some cool stuff. Like for instance running the editor on the Python asyncio event loop and having other coroutines interact with the editor.

Editing its own source code: Pyflakes for Python code checking and Jedi for autocompletion: 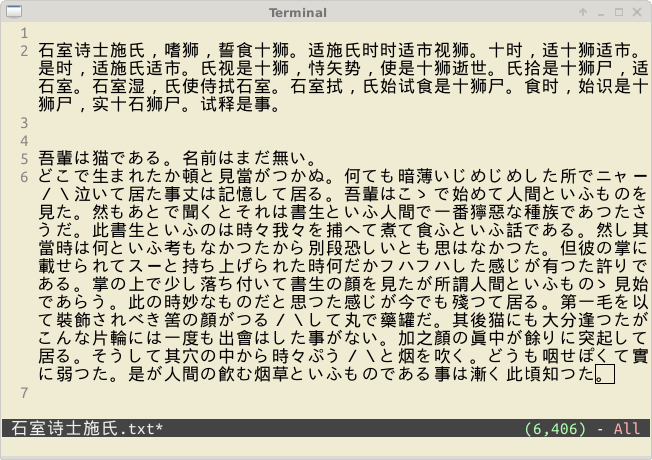 It is possible to create a .pyvimrc file for a custom configuration. Have a look at this example: pyvimrc

Compared to Vi Improved, Pyvim is still less powerful in many aspects.

There is no roadmap. I mostly implement the stuff which I need or interests me, or which gives me the opportunity to learn. But feel free to create a GitHub issue to request a new feature. Pull requests are also welcome. (Maybe create an issue first to discuss it, if you're unsure whether I'll merge it.)

Maybe some day we will have a better data structure (Rope), that makes it possible to open really large files. (With good algorithms, Python does not have to be slower than C code.)

Maybe we will also have line folding and probably block editing. Maybe some day we will have a built-in Python debugger or mouse support. We'll see. :)

To run all tests, install pytest:

And then run from root pyvim directory:

To test pyvim against all supported python versions, install tox:

And then run from root pyvim directory:

You need to have installed all the supported versions of python in order to run tox command successfully.

Why did I create Pyvim?

There are several reasons.

The main reason is maybe because it was a small step after I created the Python prompt-toolkit library. That is a library which is actually only a simply pure Python readline replacement, but with some nice additions like syntax highlighting and multiline editing. It was never intended to be a toolkit for full-screen terminal applications, but at some point I realised that everything we need for an editor was in there and I liked to challenge its design. So, I started an editor and the first proof of concept was literally just a few hundred lines of code, but it was already a working editor.

The creation of pyvim will make sure that we have a solid architecture for prompt-toolkit, but it also aims to demonstrate the flexibility of the library. When it makes sense, features of pyvim will move back to prompt-toolkit, which in turn also results in a better Python REPL. (see ptpython, an alternative REPL.)

Above all, it is really fun to create an editor.

Certainly have a look at the alternatives:

Q
Do you use curses?
A
No, it uses only prompt-toolkit.