The purpose of the Pumex library is to create an efficient and universal rendering engine using Vulkan API that has following properties : 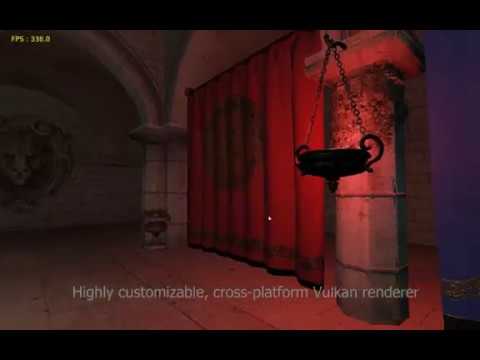 Every Pumex application consists of three distinct layers of objects :

Each node may have descriptor sets connected to it. Descriptor sets consist of images and buffers along with their GPU representation ( whether they should be treated as uniform buffers, storage buffers, sampled images, samplers, etc.). How does main render loop work

Memory buffers and images in detail

Asset class and its components

Pumex library comes with a set of examples implementing different aspects of it. Each of the examples accepts following options from command line :

While each example is running , you are able to use following inputs :

Application that renders a crowd of 500 animated people on one or more windows.

Below is additional image showing pumexcrowd example working in VR mode ( 2 windows - each one covers half of the screen, window decorations disabled ) : This application serves as performance test, because all main parameters may be modified ( LOD ranges, number of objects, triangle count on each mesh ). All meshes are generated procedurally. Each LOD for each mesh has different color, so you may see, when switches betwen LODs occur.

In OpeneSceneGraph library there is almost the same application called osggpucull, so you may compare performance of Vulkan API and OpenGL API. Command line parameters enable us to use one of predefined window configurations and also we are able to modify all parameters that affect performance:

By default application uses depth prepass rendering, but you are able to switch it off using command line parameters ( see below ).

Famous Sponza Palace model is used as a render scene.

Shaders used in that example realize physically based rendering inspired by learnopengl.com Application based on pumexdeferred example. It shows how to utilize VK_KHR_multiview extension to render two images at the same time ( without a need for a second render graph and scene graph traversal ) and how to apply barrel distortion.

Shaders used in that example realize physically based rendering inspired by learnopengl.com Application presenting image based lighting with models able to render using physically based rendering methods ( example model seen on a screenshot below was acquired from glTF Sample Models repository managed by Khronos ). Minimal pumex application that renders single non-textured 3D model provided by the user in command line along with its bounding box. You may render any model as long as Assimp library is able to load it and sum of model's vertex and index size is less than 64 MB.

At the moment the pumexviewer example is only example working on Android. Examples of use ( command line ) :

If Pumex was built withQT support enabled ( CMake flag PUMEX_BUILD_QT set to ON - see: Building and installation section ), then there is additional example showing how to create a window using QT library and how to cooperate with it. pumexviewerqt example performs rendering the same way as pumexviewer example.

Difference is that models and animations are not loaded from command line, but when user presses appropriate buttons to do so ( code presents how to use QFileDialog to load a 3D model and send data to pumex application using QT signals ). Additionally user may change model color ( code shows how to use QColorDialog ). Application that performs realtime voxelization of a 3D model provided by the user in command line. After producing 3D texture raymarching algorithm is used to render it on screen. Examples of use ( command line ) :

Voxelize and render animated model of a man ( running animation ) :

If you want to see examples in action - there's a Windows installer on Github releases page.

Besides installer you also need Vulkan SDK to be able to run examples.

Installer contains libraries, example applications, header files, data files and compiled shaders, but does not contain source code. In other words - installer has everything you need to run examples and use library as a dependency.

Installer puts all these elements in C:\Program Files\Pumex directory by default ( you may choose different target directory during installation process ).

Installer does not have QT support at the moment.

Building and installation on Windows

Elements that are required to build and install Pumex on Windows :

Building and installation on Linux

Elements that are required to build and install Pumex on Linux :

You can install above mentioned libraries using this command ( excluding QT ) :

Other libraries will be downloaded during first build ( glm, gli and args )

Building and installation on Android

Elements that are required to build Pumex on Windows and install it on Android device ( building on Linux has not been tested, but it should look the same )

Steps required to build and deploy pumexviewer example ( as it is only example working on Android at the moment ) :

You are also able to build project without Android Studio ( standalone build - using gradlew script ). But you still should have proper Android SDK, Android NDK and CMake installed.

Pumex renderer is dependent on a following set of libraries :

On Windows and Android all mandatory dependencies are downloaded and built on first Pumex library build. On Linux - some of the libraries may be installed using your local package manager ( see section about installation on Linux ). On both systems optional QT library must be downloaded manually and built with Vulkan support enabled.

Remark : Pumex is a "work in progress" which means that some elements of Vulkan API are not implemented yet and some may not work properly on every combination of hardware / operating system ( especially on Android ). Pumex API is subject to change.