A rudimentary choose your own adventure game.

backOut is a story game, inspired by black out poetry and the choose your own adventure, about emphasis and what redaction means. The protagonist is a young woman who has made a mistake and hopes to correct it, magically; to play, choose from the available terms what she should be focusing on. 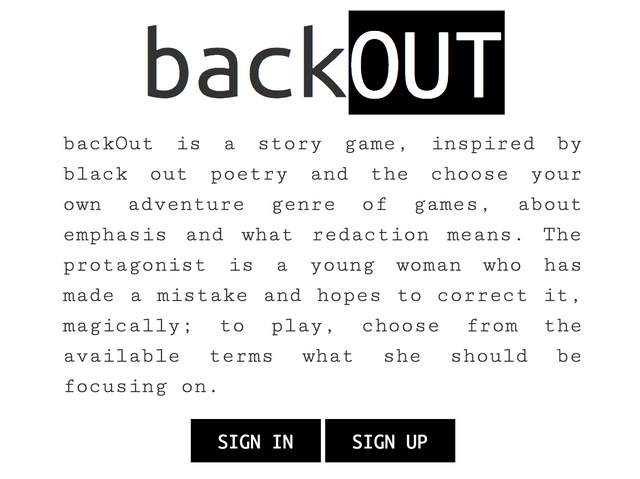 I planned to write a choose your own adventure, where particular sentences would be displayed as a result of a players selecting a certain clickable word -- and words would be redacted on the basis of that same choice, with the game's hope and wisdom stats reflecting consequences. To do this, I thought I needed to have sentences that owned words, with words having keys for their clickability and whether or not they were redacted, as well as a link to the next step.

In V1, I was able to make all the necessary requests by having the application depend heavily on the backend. Though I was able to write the code to redact as it was, the free level of heroku can only make 100 requests per minute -- and I was making at least that when I was adding redaction to each word and removing clickability, then updating them all.

In V3, I want to further refine the front end to make it more modular. Currently the game depends on an expansive switch case, which is difficult to track.

A rudimentary choose your own adventure game.