A repository of pacman packages for use with the new rtools 4.0 build system. Successful builds from the master branch of this repository are automatically deployed on bintray and become eventually available via pacman in Rtools 4.0.

To build a mingw-w64 package, open an rtools40 shell, cd into the package directory and run makepkg-mingw like this:

The --syncdeps flag will automatically install package dependencies (see the next section if you need additional non-rtools build tools). Add --noconfirm to the command to skip the interactive confirmation prompt. 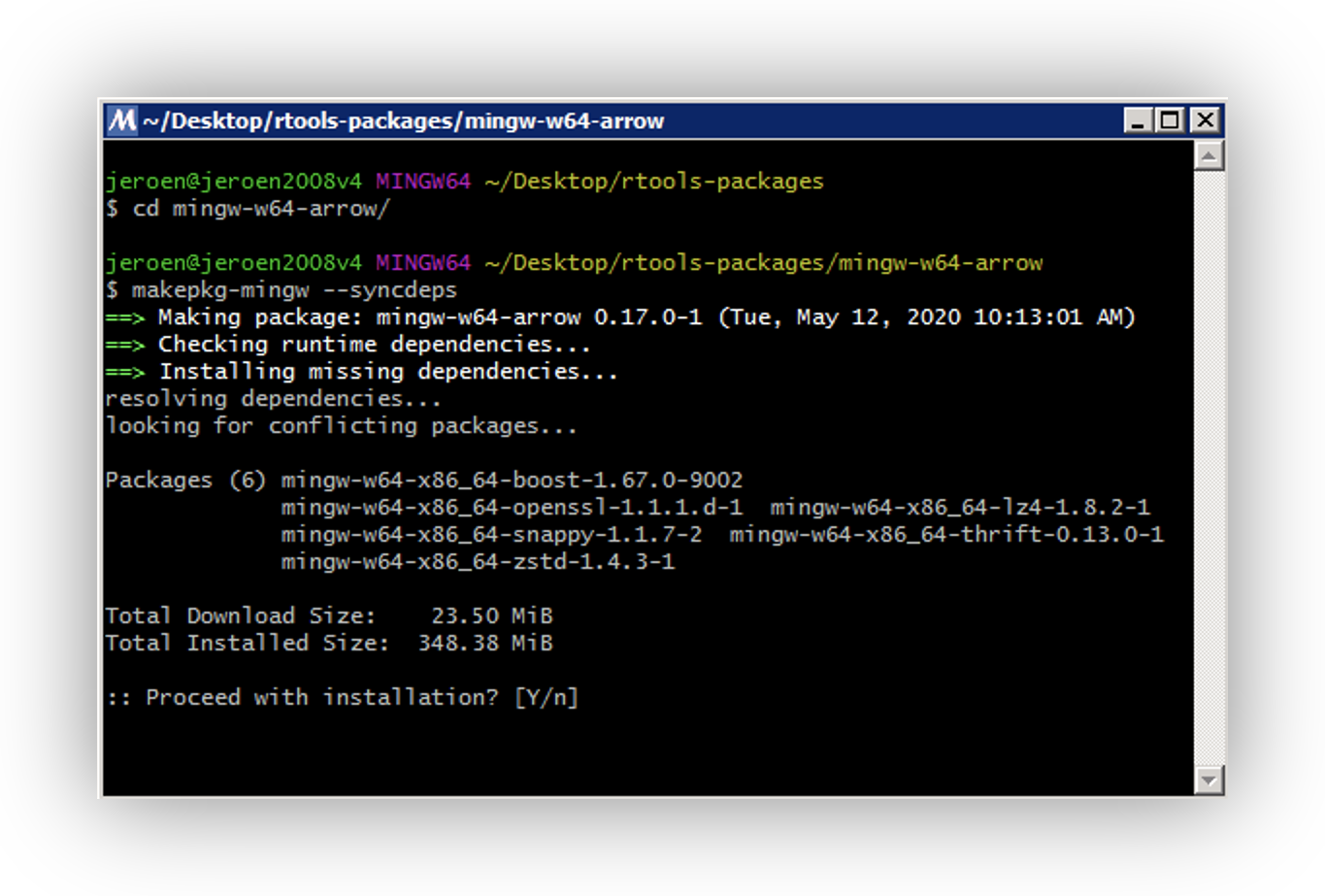 Once the system library has been installed with pacman, you can link to it in your R package in the usual way. The rtools40 compiler will automatically find the headers and libraries for installed system libraries, just like on Linux.

To add or update a pacman package in rtools40, please send a pull request to the rtools-packages repository. The CI will automatically build it for you, but please test locally before sending the pull request.

If you want to add a new rtools40 package that is already available in msys2, you can simply adapt the PKGUILD from the their msys2/MINGW-packages repositories. However there is one important thing that needs to be changed for use with R:

This is important because Windows R binary packages need to be standalone and redistributable, so packages in the rtools-packages repo may not contain dll files.

Some C/C++ system libs need additional build utilities which we do not provide in rtools, such as autoconf. Build utilities are the pacman packages that are not prefixed with mingw-w64. You can get these from the upstream msys2 pacman repository. There many of them, and they change frequently. Build utilities should be declared in the makedepends of the PKGBUILD file. You should not use these utilities from within R packages, only for building pacman packages.

By default, the rtools40 environment is frozen in a stable state and only allows you to install extra rtools packages. Enabling the upstream msys2 repository and installing extra utilities may alter the rtools40 behavior, so avoid this on important R package build servers.

To enable the upstream msys repo, open the file c:\rtools40\etc\pacman.conf in a text editor and uncomment the following 2 lines at the very end of the file:

Update (July 2020): upstream msys2 has changed to new signing keys which are currently not included with rtools40. If you get PGP key errors after enabling msys2 repositories, the easiest workaround is to add a line with SigLevel = Never underneath the Include line mentioned above.

Rtools40 will never install anything outside of your rtools40 installation directory. So if you somehow messed up the installation beyond repair, simply reinstall rtools40 to start over.

To speed up repetitive builds during packaging, install and enable ccache: