This package contains the IRIS algorithm for iterative convex regional inflation by semidefinite programming, implemented in C++ with bindings for Python. It is designed to take an environment containing many (convex) obstacles and a start point, and to compute a large convex obstacle-free region. This region can then be used to define linear constraints for some other objective function which the user might want to optimize over the obstacle-free space. The algorithm is described in:

A pure-MATLAB implementation of IRIS is also included in src/matlab. This will be slower and less flexible than the Python and C++ versions, but may be useful for legacy code.

You'll also need some python packages to build and use the python bindings. You can install them on ubuntu with these apt-get packages:

Or you can install the liblapack-dev, libblas-dev, and gfortran packages from apt-get, and then install the python modules with pip:

You'll also need a license for the Mosek optimization toolbox https://www.mosek.com/ (this package includes a downloader for the Mosek code, but you have to get your own license). Mosek has free licenses available for academic use.

This project is configured as a standard CMake project, so the general build process is:

By default, IRIS will build its external dependencies as part of the build process. If you want to turn any or all of them off, you can set the WITH_EIGEN, WITH_CDD, and WITH_MOSEK options to OFF using cmake. The easiest way to do that is to run:

which will launch a terminal-based GUI to let you change those options.

If you're using IRIS as part of another project with cmake, you can just set the CMAKE_CACHE_ARGS to include -DIRIS_WITH_EIGEN:BOOL=OFF etc. For more information, see: http://www.cmake.org/cmake/help/v3.0/module/ExternalProject.html.

Here are some animations of the algorithm running in various environments:

3-dimensional configuration space of a rod-shaped robot translating and yawing:

This is a demonstration of path-planning for a simple UAV model around obstacles. Rather than constraining that the UAV be outside the obstacles, we seed several IRIS regions and require that the UAV be inside one of those regions at each time step. This turns a non-convex problem into a mixed-integer convex problem, which we can solve to its global optimum. You can try this out by running iris.test.test_uav_demo(); or iris.test.test_uav_demo('4d'); 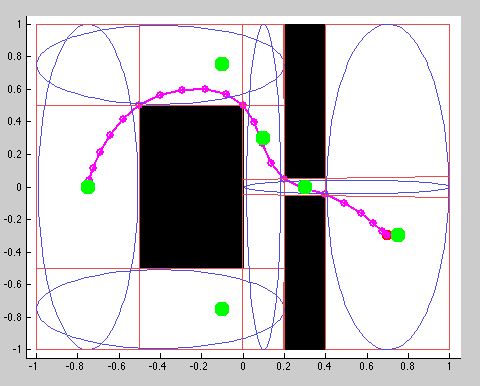