This REANA reproducible analysis example studies the Higgs-to-four-lepton decay channel that led to the Higgs boson experimental discovery in 2012. The example uses CMS open data released in 2011 and 2012. "This research level example is a strongly simplified reimplementation of parts of the original CMS Higgs to four lepton analysis published in Phys.Lett. B716 (2012) 30-61, arXiv:1207.7235." (See Ref. 1).

The analysis takes the following inputs:

"The example uses legacy versions of the original CMS data sets in the CMS AOD, which slightly differ from the ones used for the publication due to improved calibrations. It also uses legacy versions of the corresponding Monte Carlo simulations, which are again close to, but not identical to, the ones in the original publication. These legacy data and MC sets listed below were used in practice, exactly as they are, in many later CMS publications.

Since according to the CMS Open Data policy the fraction of data which are public (and used here) is only 50% of the available LHC Run I samples, the statistical significance is reduced with respect to what can be achieved with the full dataset. However, the original paper Phys.Lett. B716 (2012) 30-61, arXiv:1207.7235, was also obtained with only part of the Run I statistics, roughly equivalent to the luminosity of the public sets, but with only partial statistical overlap."(See Ref. 1).

The analysis will consist of two stages. In the first stage, we shall process the original collision data (using demoanalyzer_cfg_level3data.py ) and simulated data (using demoanalyzer_cfg_level3MC.py ) for one Higgs signal candidate with with reduced statistics. In the second stage, we shall plot the results (using M4Lnormdatall_lvl3.cc ). The HiggsDemoAnalyzer directory contains the analysis code plugin for the CMSSW analysis framework.

In order to be able to rerun the analysis even several years in the future, we need to "encapsulate the current compute environment", for example to freeze the software package versions our analysis is using. We shall achieve this by preparing a Docker container image for our analysis steps.

This analysis example runs within the CMSSW analysis framework that was packaged for Docker in cmsopendata/cmssw_5_3_32.

The analysis workflow is simple and consists of two above-mentioned stages:

There is a serial workflow that does the steps sequentially, but this demo represents a better use case for workflow tools capable of parallel execution.

We shall use the CWL workflow specification to express the computational workflow:

and its individual steps: 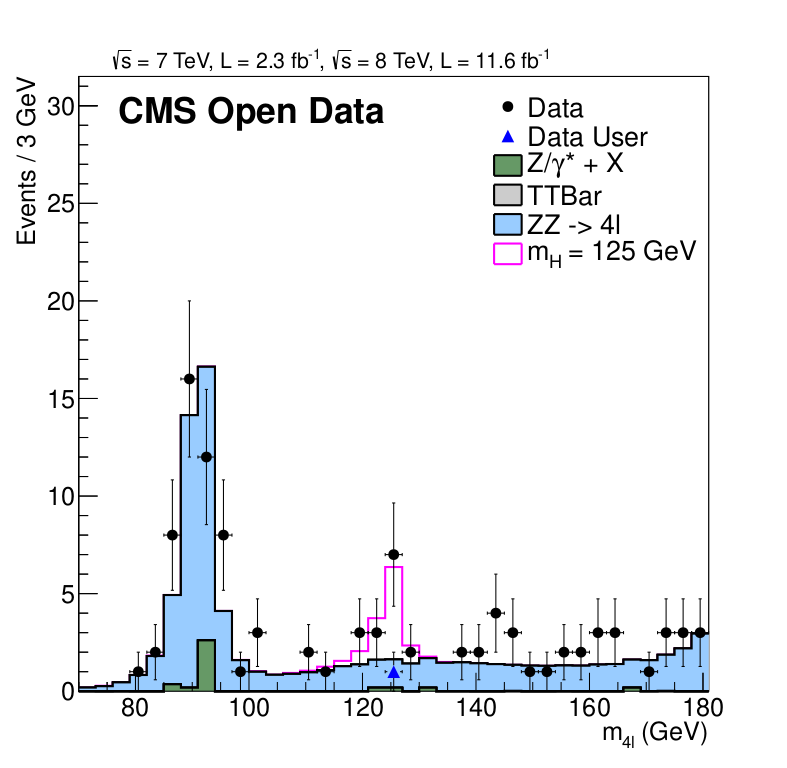 The published reference plot which is being approximated in this example is https://inspirehep.net/record/1124338/files/H4l_mass_3.png. Other Higgs final states (e.g. Higgs to two photons), which were also part of the same CMS paper and strongly contributed to the Higgs boson discovery, are not covered by this example.

Running the example on REANA cloud

We start by creating a reana.yaml file describing the above analysis structure with its inputs, code, runtime environment, computational workflow steps and expected outputs. In this example we are using the CWL workflow specification, with its steps in the workflow directory.

At the same time, for easy debugging purposes (to avoid the cwl overhead), we have setup also a serial workflow as follows:

We can now install the REANA command-line client, run the analysis and download the resulting plots:

The list of contributors to this REANA example in alphabetical order: