The UniJoystiCle is a unicycle simulator for the Commodore 64, and much more! It allows you to control the joystick lines remotely, with anything that you have in mind like:

It consists of two major parts: 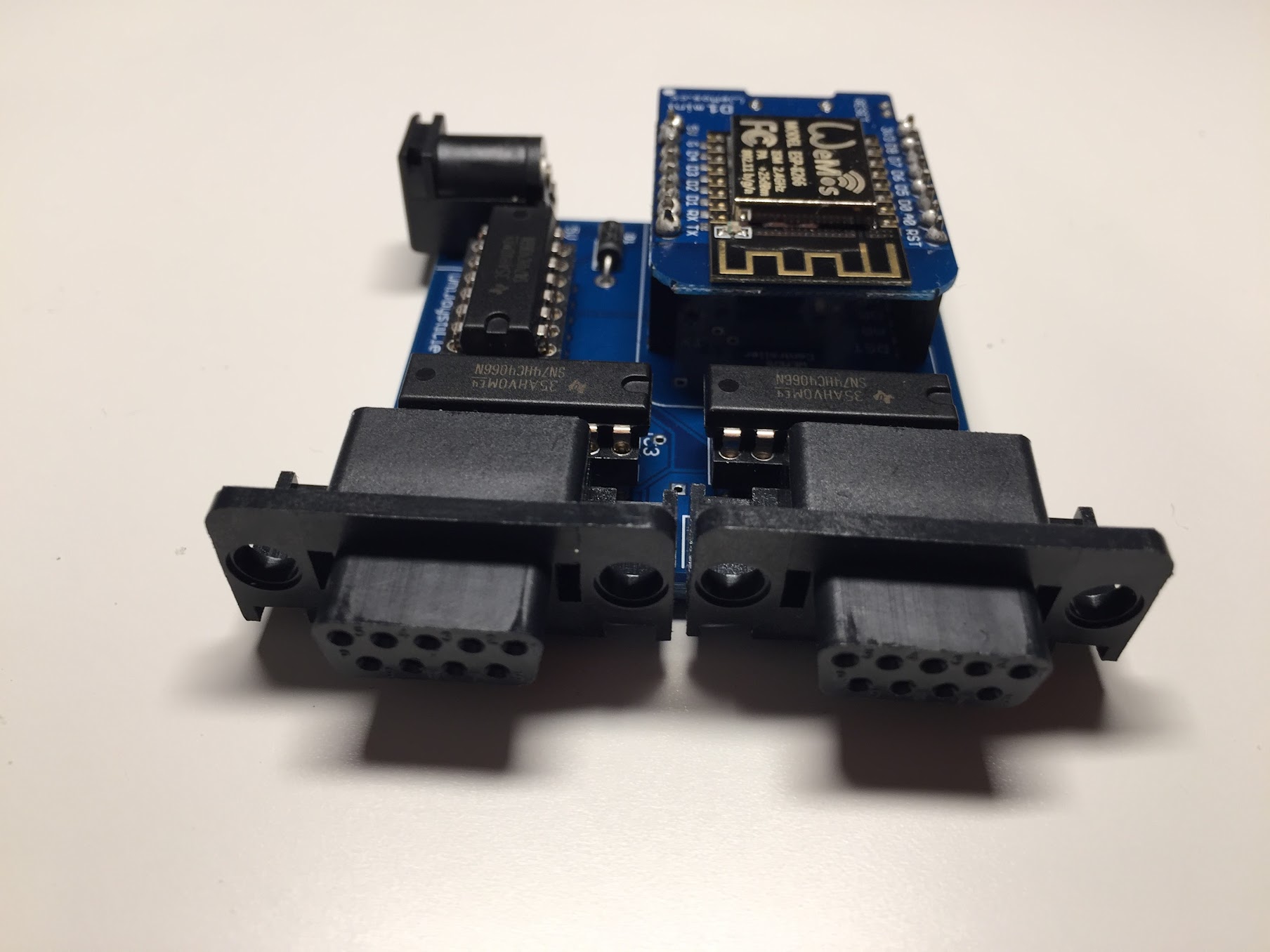 The WiFi device goes attached to the Commodore 64, and is the one that generates the real joystick movements. It does so by opening/closing the joystick lines.

In order to work it needs power. Unfortunately the C64 joystick ports DON'T have enough current to power it. The options to power it are: 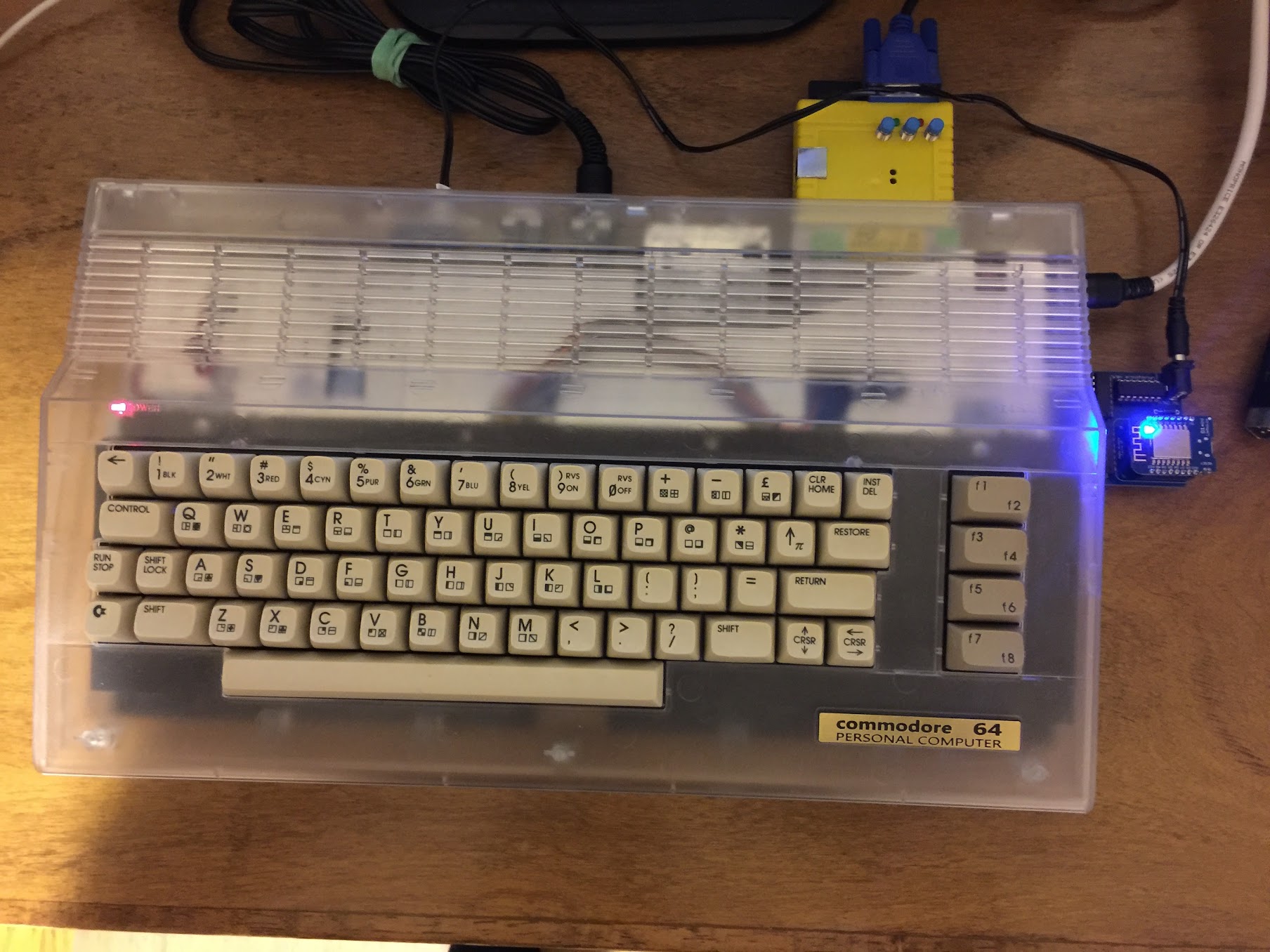 By default, the WiFi device will start in Access Point mode, and will create a WiFi network named "unijoysticle-xxyyzz". From your smartphone Settings, connect to it...:

...and then launch the UniJoystiCle smartphone app.

The client application can be download for free from the App Store / Google Play:

It sends "joystick commands" to the WiFi device. These commands are regular joystick movements: Up, Down, Left, Right and Fire. It can send one or multiple commands at the time. 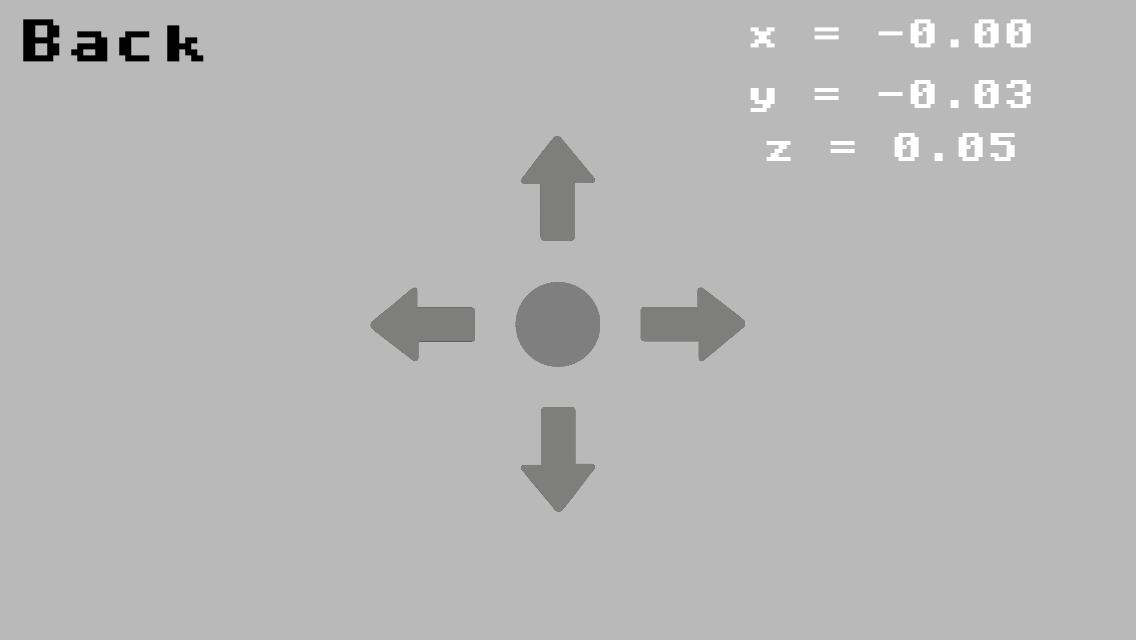 In this mode, the joystick commands are generated from the smartphone's accelerometer. The accelerometer detects acceleration in the three coordinates: X, Y and Z. If we attach an accelerometer (in this case the smartphone) to a unicycle (or bike) pedal, and we measure the accelerometer's data while we pedal, we will notice that the X and Z axis generates data similar to a sine and cosine.

And if we put those values in cartesian coordinates (eg: Accelerometer(Z) = Y axis, and Accelerometer(X) = X axis), we will have something similar to a circle. 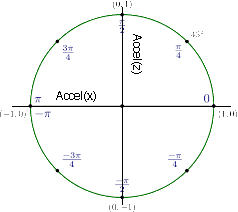 And if we calculate the arctangent (atan2()) value of sin/cosine we get the angle. And with the angle we can simulate the joystick movements. We divide the circle in 8 segments, and assign a joystick movement to each segment. Eg: 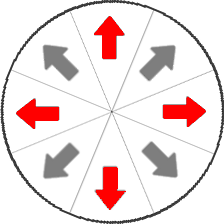 There are no such things as "joystick diagonal commands". So in order to simulate the top-right diagonal, we just send the "top" and "right" joystick movements at the same time.

From the graphic we can deduce that:

One pedal revolution == one joystick "revolution"

But it is possible to change that ratio. For example, we can change it to "One pedal revolution == two joystick revolutions". Just go to settings and do: 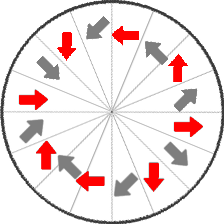 This is useful to:

Compatibility: This mode is compatible with multiple sports games like:

Video: Using a unicycle to play The Uni Games 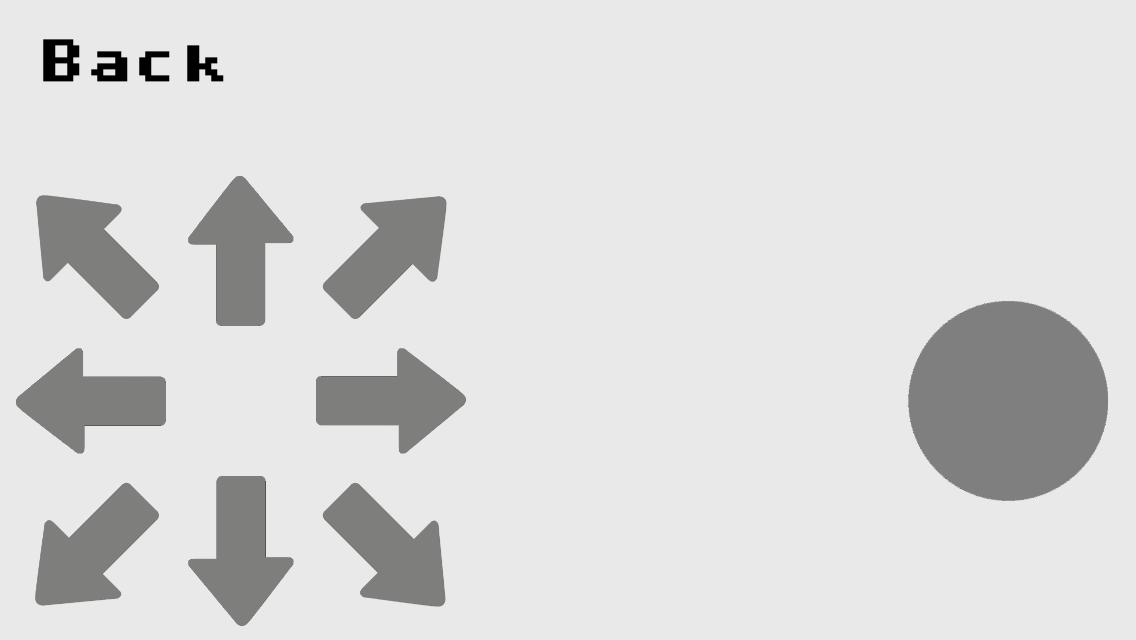 This mode converts the smartphone in a virtual D-pad. Just press the arrows for joysticks movements, and the circle to fire. 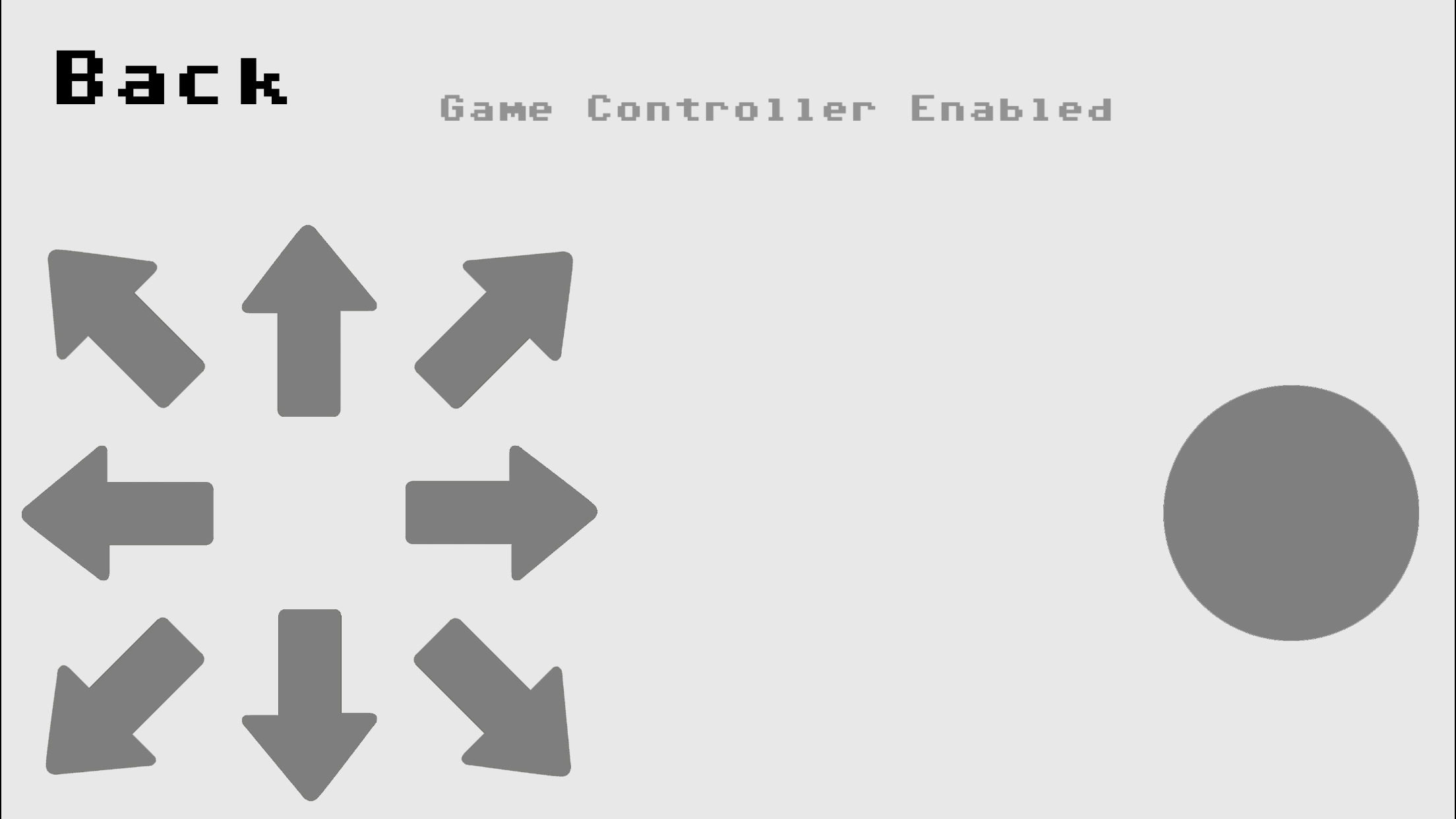 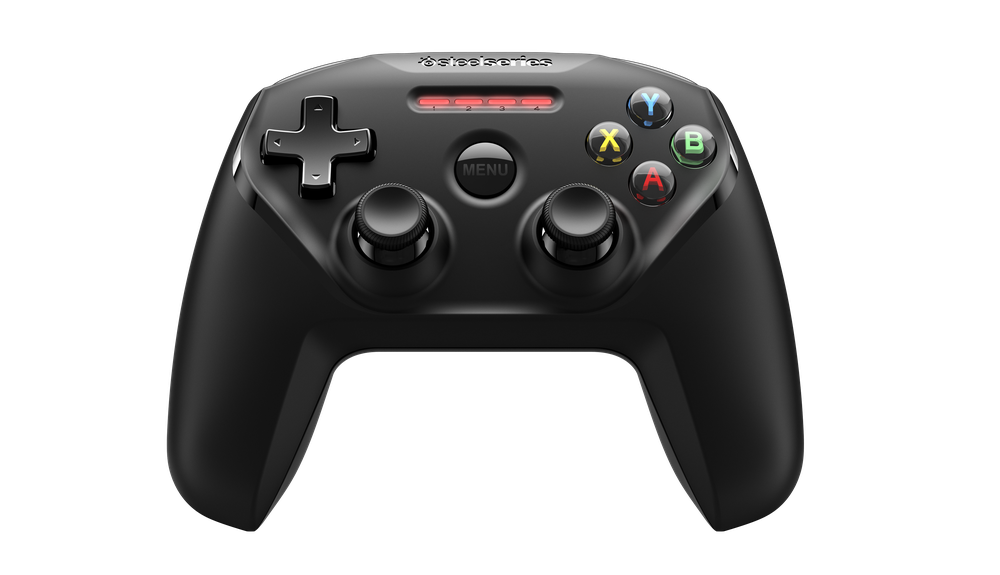 This is the same D-pad mode as before. But if you connect any Game Controller to your smartphone (for iOS it supports both MFi and iCade controllers; for Android it supports official controllers as well as OUYA ones), it will automatically detect it. And with it you can control the virtual D-pad giving you a great gaming experience.

You can configure it to:

Which controller should you use: 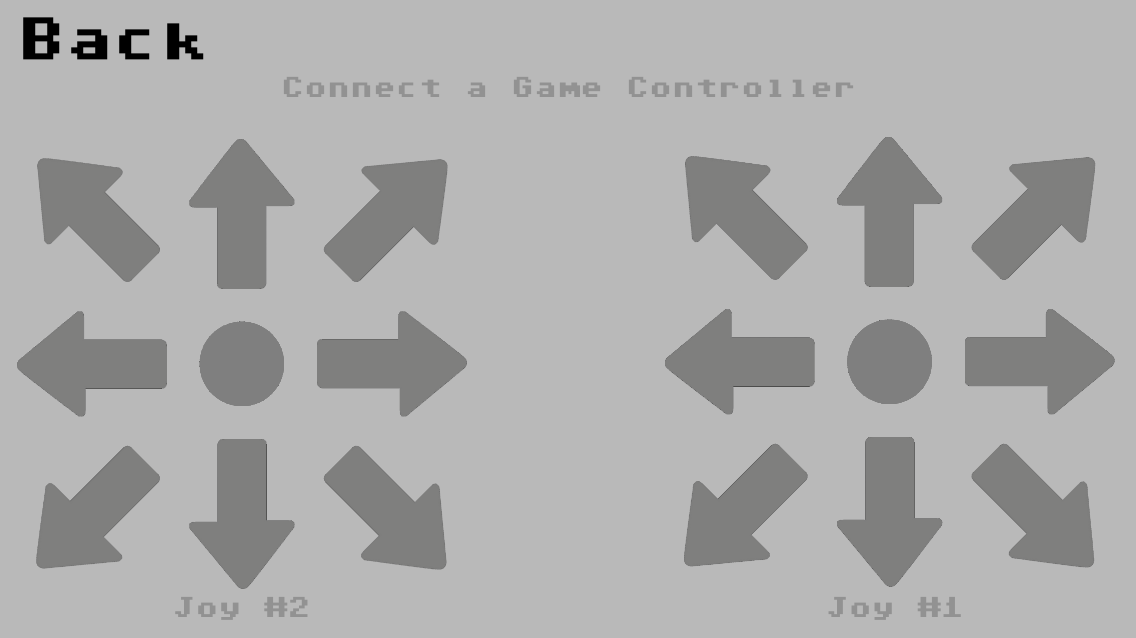 In this mode you control both joysticks at the same time. A game controller is needed for this. Can't be played with the "virtual" dpad. It is called "Commando" mode, since it allows you to play games like Commando, Turrican II or Dropzone since:

Which controller should you use: In this mode you control the black circle that is inside the blue circle strip. You move the black ball by tilting your smartphone, and gravity will do the rest. Press the gray circle at the right for fire.

Note: This mode is only avaible on iOS. Android support coming soon. 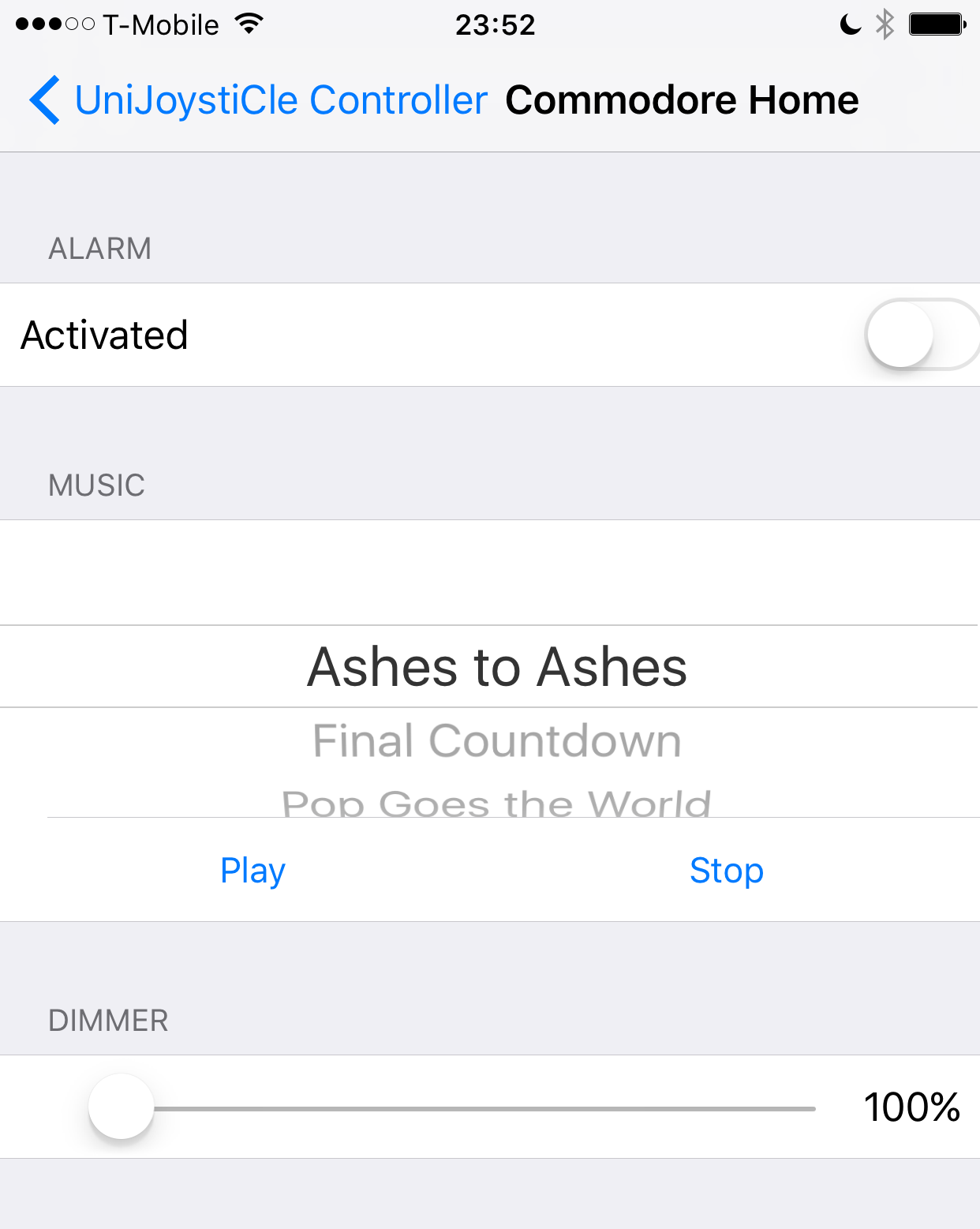 The desktop application can be downloaded from here:

The WiFi receiver listens to UDP port 6464 and it expects a packet of 4 bytes:

Example, a packet with these bytes means:

The hardware as well as the software are open source. So you can build one yourself. The schematic and board files are in Eagle format:

You will need the following components (BOM):

And solder them. It should be straightforward where to place the components. If not, ping me

The barrel jack and the diode are optional. They are needed if you want to power the device from an external power source. eg: from the C64 datasette port. Any +5v DC power with at least 320mA should be enough. If you want to avoid the soldering, you can order an already assembled PCB from here.

After assembling the PCB, it should look like this: 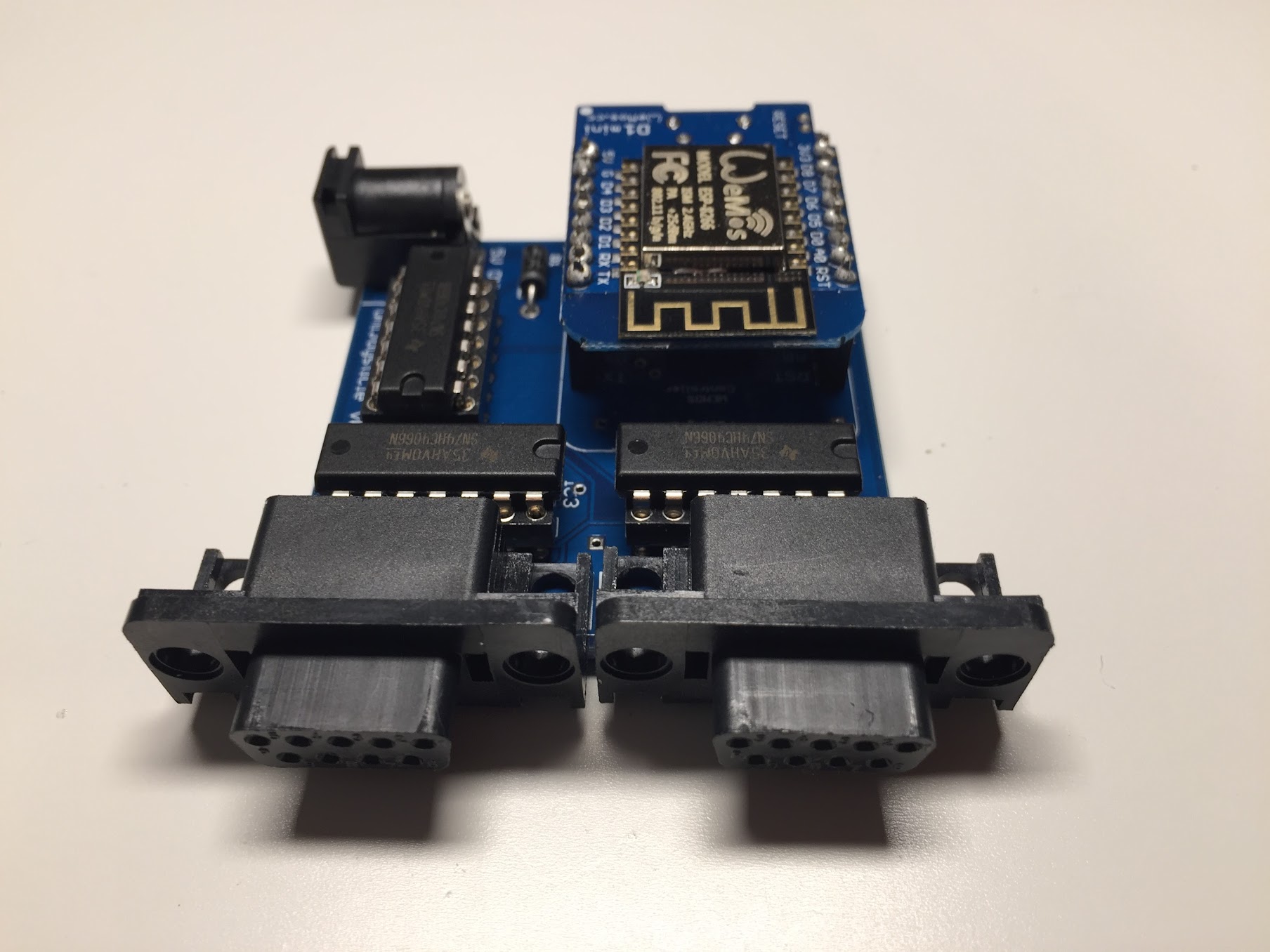 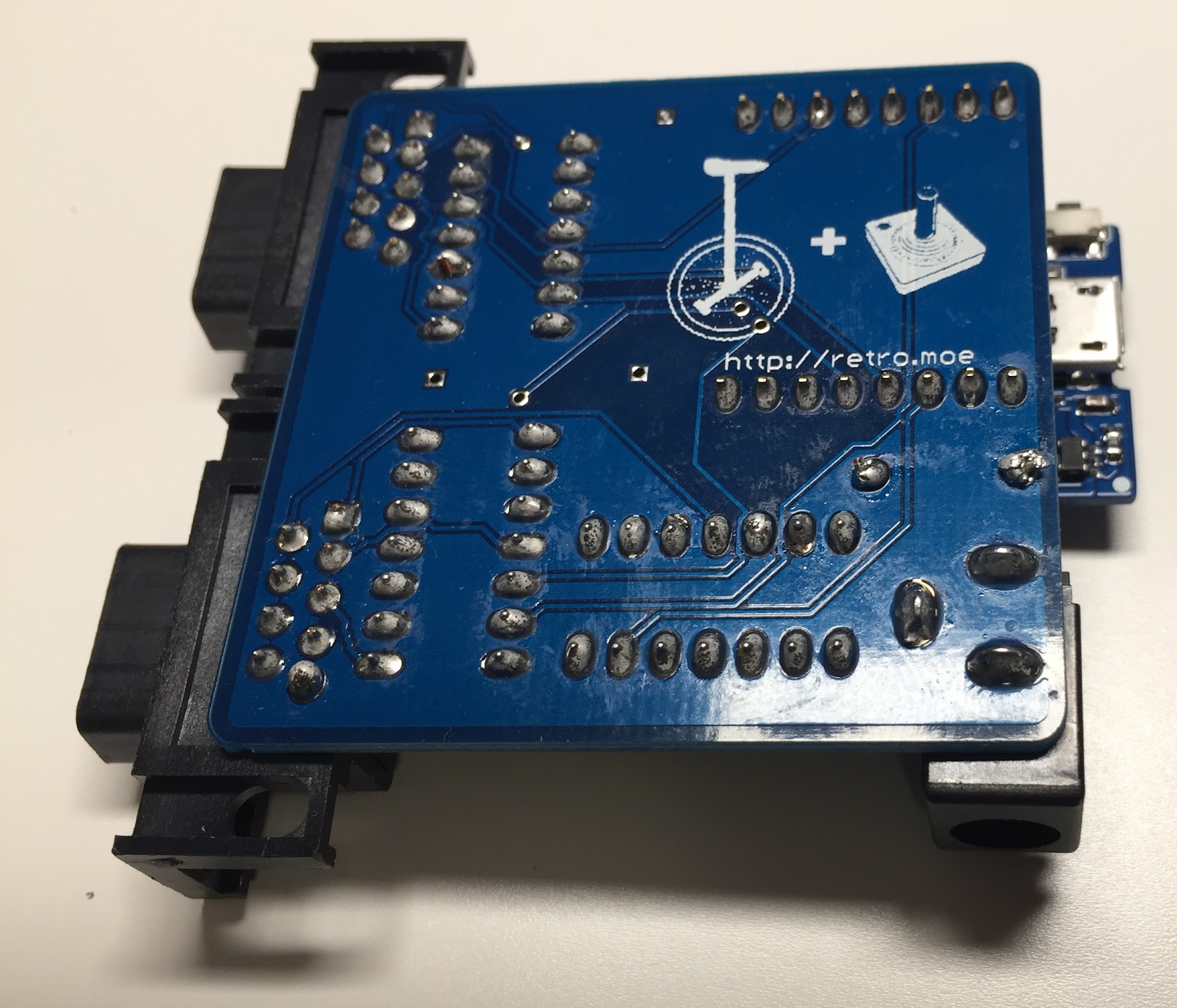 And from here you have two options: the "easy" one for users, and the "hard" one for developers:

Option A: For users only

Either you can use:

For esptool.py you should do:

In case it is needed, it uses a:

Since firmware v0.4.2, manual upgrading no longer needed to. It has an option to upgrade itself.

Option B: For developers only 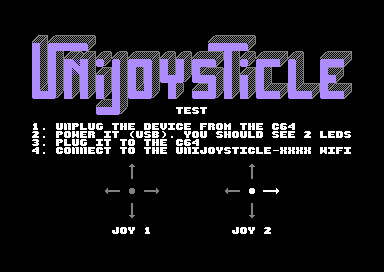 If you don't see one LED on the device then:

If that doesn't work (you don't see the one LED), probably:

When using power from the C64

You should know that all the connected devices compete for the current. Example: If you have an 1541 Ultimate II, a WiModem and the UniJoystiCle, then the three of them will compete for current. If that is the case, most probably one of them won't work.

Tested configurations with current taken from the datasette port:

So, How much power does The UniJoystiCle use ?

The WiFi module alone uses up to 200mA when it is in Access Point and the clients try to connect to it. But on average it uses ~56mA. More info here: ESP8266 Power Consumption. It also uses 12mA for each joystick line that is High. For example, if 3 lines are High (Joy #1 Up, Joy #1 Fire, joy #Left) then it will use 36mA for that alone. So, a max of 320mA might be needed:

This is not a bug/limitation of the UniJoystiCle. It is a c64 limitation. The c64 keyboard won't work correctly if you keep moving a regular joystick while using the keyboard.

Since firmware v0.4.3, a default inactivity timeout of 10 seconds was added. If no data is received within that period of time, the joysticks are going to be reset.

Some joystick movements work but others don't

Did you find a bug? Please report it here: