A system for development of high-performance, data-intensive, distributed computing, applications, tools, and libraries. 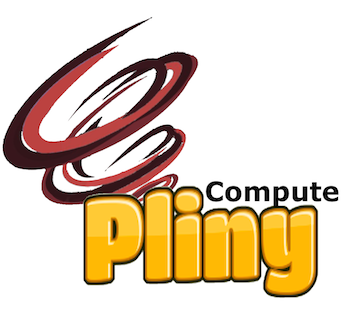 PlinyCompute is a platform for high-performance distributed tool and library development written in C++. It can be deployed in two different cluster modes: standalone or distributed. Visit the official web site for more details http://plinycompute.rice.edu.

Disclaimer: The views, opinions, and/or findings contained in this research are those of the authors and should not be interpreted as representing the official views or policies of the Department of Defense or the U.S. Government.

PlinyCompute has been compiled, built, and tested in Ubuntu 16.04.4 LTS. For the system to work properly, make sure the following requirements are satisfied.

These environment variables have to be set:

Note: the value of these variables is arbitrary (and they do not have to match), but make sure that you have proper permissions on the remote machines to create folders and write to files. In this example, PlinyCompute is installed in /home/ubuntu/plinycompute on the manager node, and in /tmp/pdb_install in the worker nodes.

PlinyCompute running in a distributed cluster uses key-based authentication. Thus, a private key has to be generated and placed on $PDB_HOME/conf. The file name of the key is arbitrary, by default it is pdb-key.pem, make sure it has the following permissions $ chmod 400 $PDB_HOME/conf/pdb-key.pem.

In addition to Python (version 2.7.12 or greater), the table below lists the libraries and packages required by PlinyCompute. If any of them is missing in your system, run the following script to install them $PDB_HOME/scripts/internal/setupDependencies.py.

This command will download PlinyCompute in a directory named plinycompute. Make sure you are in that directory by typing:

In a Linux machine the prompt should look something similar to:

However, if you are interested in debugging PlinyCompute, issue the following command:

Conversely, to turn debugging messages off, issue the following command:

Depending on the target you want to build, issue the following command:

For example, the following command compiles and builds the executables and shared libraries for the machine learning application in the bin folder.

For developers who want to add new functionality to PlinyCompute, here are examples on how to build and run unit and integration tests.

PlinyCompute can be launched in two modes:

The output should show the following processes running (partial output is displayed for clarity purposes):

As the program is executed, the output will be displayed on the screen. Congratulations you have successfuly installed, deployed, and tested PlinyCompute.

Although running PlinyCompute in one machine (e.g. a laptop) is ideal for becoming familiar with the system and testing some of its functionality, PlinyCompute's high-performance properties are best suited for processing large data loads in a real distributed cluster such as Amazon AWS, on-premise, or other cloud provider. To accomplish this, follow these steps:

This command downloads PlinyCompute in a folder named plinycompute. Make sure you are in that directory. In a Linux machine the prompt should look something similar to:

In the above example, the cluster will include one manager node (where PlinyCompute was cloned), and three worker nodes.

This will generate two executables in the directory $PDB_HOME/bin:

After completion, the output should look similar to the one below, (partial display shown here for clarity purposes):

At this point all executable programs and scripts are properly installed on the worker nodes!

Where the following arguments are required:

The last two arguments are optional:

In the following example, the public IP address of the manager node is 192.168.1.0; the pem file is conf/pdb-key.pem; by default the cluster is launched with 1 thread and 2Gb of memory.

If you want to launch the cluster with more threads and memory, provide the fourth and fifth arguments. In the following example, a cluster is launched with 4 threads and 4GB of memory. For more information about tunning PlinyCompute visit the system configuration page.

After completion, the output should look similar to the one below, (partial display shown here for clarity purposes):

To stop a running cluster of PlinyCompute, issue the following command if you are running in a distributed cluster:

Conversely, use this one if you are running a standalone cluster:

To remove data in a PlinyCompute cluster, execute the following script. Note that the value of the first argument is distributed, meaning this will clean data in a real cluster. Warning: this will remove all PlinyCompute stored data and catalog metadata from the entire cluster, use it carefully.

If you are running in a standalone cluster, run the following script:

A system for development of high-performance, data-intensive, distributed computing, applications, tools, and libraries.