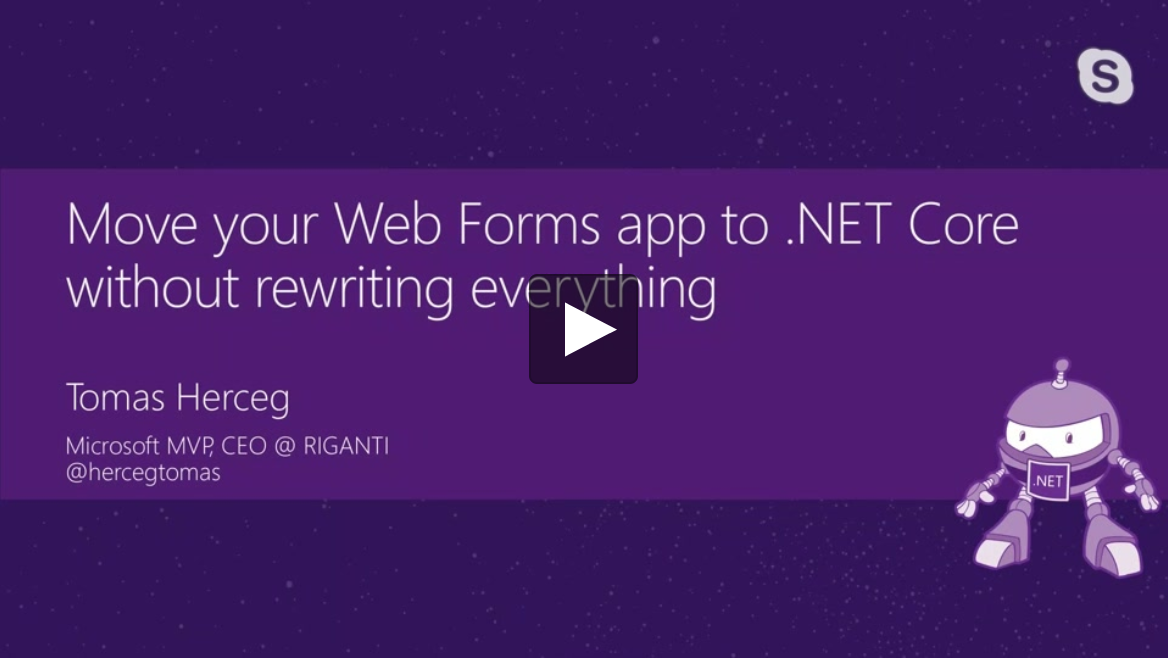 DotVVM is an open source MVVM framework for web applications that supports ASP.NET and ASP.NET Core.

There are still plenty of old Web Forms applications out in the world. They are difficult to maintain and extend. The authors of such apps stand in front of a difficult choice:

The total rewrite is a timely process. It requires a huge effort, it is often hard to get approved by company management, and requires the developers to adopt a lot of new knowledge. Morover, it is difficult for the team to add new features in the application as they have a lot of work with the rewrite.

The second way, which is demonstrated by this sample, is less risky, involves less effort and allows to split the modernization into smaller parts so the team can split its capacity to satisfy both modernization and adding new features. DotVVM is also similar to Web Forms in many ways and doesn't require extensive knowledge of JavaScript, so it is very easy to adopt to any .NET developer.

See the C# version of the sample if you are using C# in your Web Forms app.

This sample demonstrates how DotVVM can be used in the process of incremental modernization of Web Forms applications. Every step of the process can be seen by checking out one of the repository branches.

We recommend to install an extension for Visual Studio that brings the IntelliSense and templates for DotVVM files (in C# projects).

Step 1: The 01_webforms branch contains a simple ASP.NET Web Forms application (in VB.NET) with a few pages and a simple usage of the GridView control.

Step 2: The 02_install_dotvvm branch shows how to install DotVVM in the project.

Now you can create new pages in the application using DotVVM, and start an incremental upgrade of the ASPX pages to DotVVM. See the differences cheat-sheet to learn about the differences between DotVVM and ASP.NET Web Forms.

Step 3: The 03_migration_in_progress branch shows some pages migrated to DotVVM while the rest remains in ASP.NET Web Forms.

The deployment model of the application remains the same - you don't need to change anything. This stage can take a long time as there may be hundreds of pages in the application.

During the migration, you can make another refactorings, and thanks to the MVVM approach of DotVVM, your viewmodels will be testable. This can improve the further maintainability of the application.

Step 4: The 04_migration_complete branch shows all the pages migrated to DotVVM.

The viewmodel was using the business logic that was present in the Model folder. This logic was moved to the class library project so it can be used from both Web Forms and DotVVM apps.

At the end of this stage, the application doesn't use any of the ASP.NET Web Forms features, so it's ready to be switched to .NET Core. In real-world applications, there might be some other things to change like authentication (needs to be migrated to ASP.NET Core authentication libraries), bundling and more. All these things will need to be addressed during the next step.

Step 5: The 05_dotnetcore branch shows the changes made to the project file in order to switch the project to .NET Core 3.0.

Switching to .NET Core may require additional configuration steps on the server to be performed. Make sure you plan this process in advance so the upgrade process is smooth.

As you can see, the migration is not easy - there is no magic wizard that will just "convert" the application from ASP.NET Web Forms. However, this method allows to migrate the application while new features can be added continuously, and means much less effort than a total rewrite. You can also learn DotVVM on the fly, start with simple pages and continue with the complex ones.

See the C# version of the sample if you are using C# in your Web Forms app.