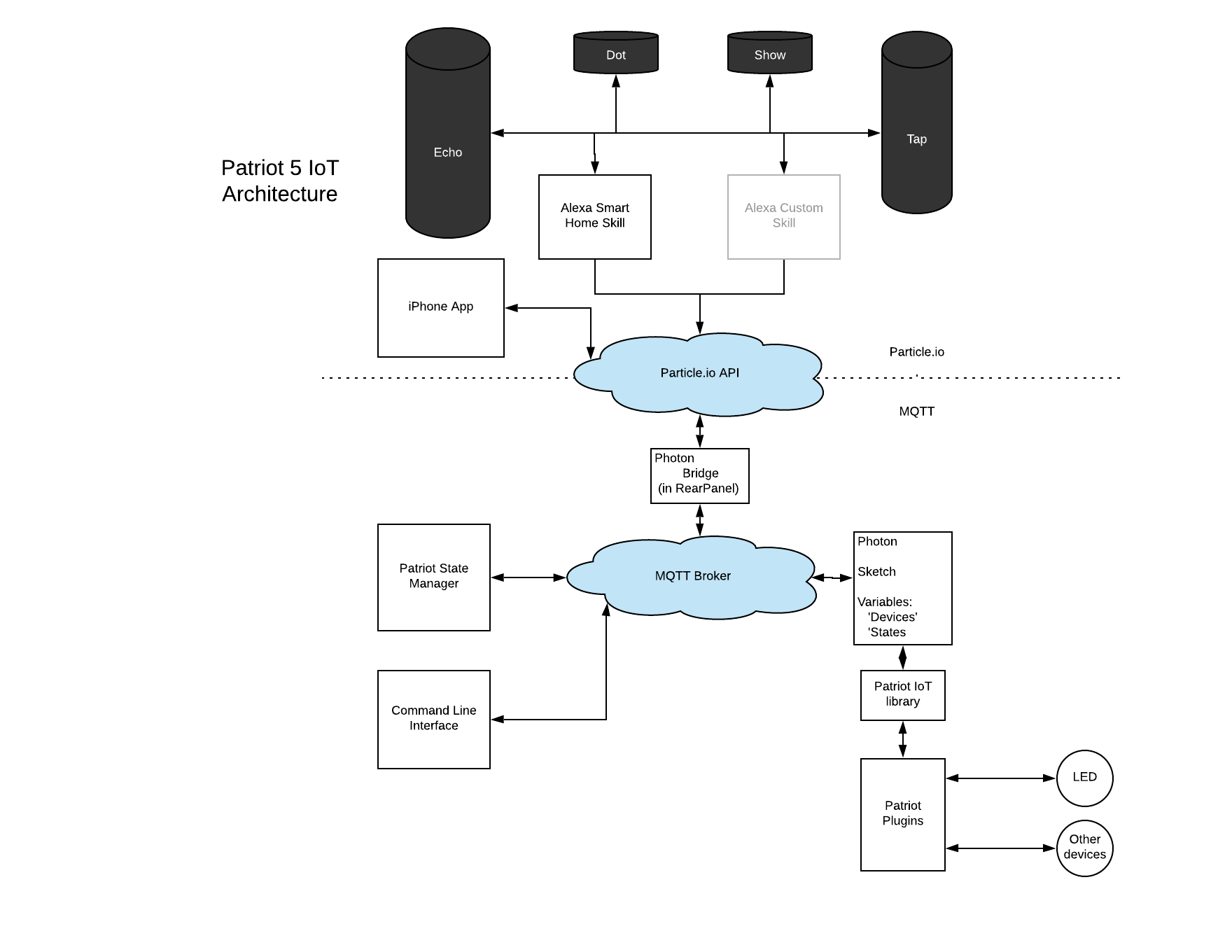 It is intended to help other hobbyists quickly create Internet-of-Things projects that can be controlled using Voice (Alexa) and iOS devices without having to recreate new Alexa skills or iOS apps.

Initially this project will consist of a published particle.io Photon library (IoTlib) and a published Alexa Smart Home skill (Patriot).

An iOS control panel app exists that allows your old iPhones to be used as touch display control panels. This code resides in the Patriot-iOS repository.

If you are using an Alexa device, then you can also use the Alexa app Smart Home page to monitor and control your devices in addition to or instead of using the Patriot-iOS app.

Your Photon based IoT projects can be created using any of the standard particle.io development tools (Web IDE, Particle IDE, or Particle CLI).

The main objective is to allow the creation of networks of IoT devices that can communicate with each other, and is:

Refer to Alexa Controlled Photon Project without Alexa Coding on Hackster.io or my blog at lisles.net for more information.

Particle.io Photons are used to due to their ease of use and great support. I've created low cost printed circuit boards (PCBs) to make it even easier to use. These have wireless built-in, and can be programmed over-the-air (OTA) so all they need is power to get started.

I've provided a set of source code files and instructions that can be used to simplify programming IoT devices using Particle's $19 Photon.

I've also included the Eagle files and instructions for creating general purpose IoT printed circuit boards. Using these files, PCBs can be ordered from China for about $1.50 each.

Recently Particle announced that their P0 and P1 parts are now supported in Seeed's PCB Fusion program. This enables the creation of low cost custom PCBs using the smaller, lower cost P0 and P1 chips, and optional assembly. Wow! I've not tried this yet, but it looks very promising and I will post my designs once I do so.

An Alexa smart home skill can be used to voice control the devices. This includes Amazon's Echo, Dot, or Tap, in addition to other AVS implementations such as Astra running on iOS.

The Alexa smart home skill will automatically detect your devices and allow control of them based on the names and events coded in the Photon microcode.

The Alexa skill will prompt you to login to your Particle.io account when you install it. From that point on it will automatically detect devices that you compile with the IoTlib, using the name and commands specified in the device's code.

An iOS app can be used to control devices from your iPhone or iPad. For example, you can use your old iOS devices as control panels to turn on and off devices that you implement using Photons.

In addition, I've created a separate iOS app that can run on older iOS devices. I use this to provide control panels by mounting unused, older iPhones directly to the wall in various places around my RV.

Currently the apps must be compiled in Xcode with your Particle.io credentials and downloaded to your iPhone or iPad manually, but I intend to allow the use of a single, published app using particle.io OAuth in the future. It remains to be seen whether Apple will allow certifying a hobbyist app such as this, but I'm going to try.

And as mentioned above also, the Alexa app can be used to control your devices.

Refer to the (Releases page)[https://github.com/rlisle/Patriot/releases] for release history.