My (winning!) entry in the KansasFest 2017 HackFest competition. 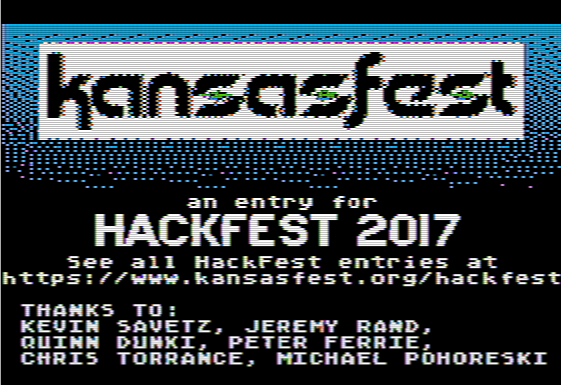 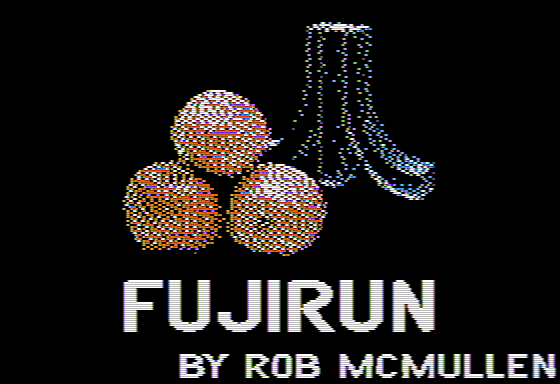 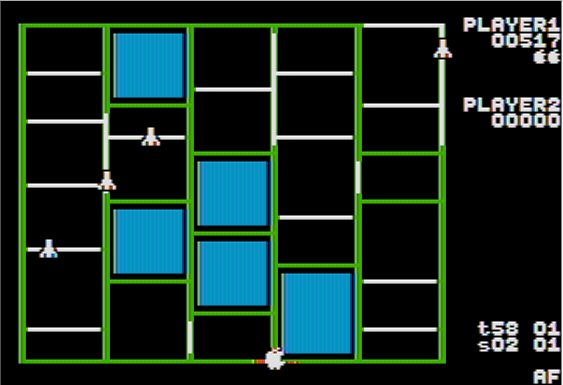 Fujirun is written for an Apple ][+ with 48K of memory.

A pre-built disk image is included, so no need to reassemble the code unless you are changing something. Use your favorite Apple II emulator to boot the disk image fujirun-v1.dsk.

To build from the assembly source, you will need the following programs:

For Python, you will need these additional packages:

which are available through pip. Once Python is installed, use: pip install atrcopy asmgen.

This is a clone of the arcade game Amidar. You control an apple, trying to fill in rectangles while avoiding the booataris. Moving on the lines of the maze, you change the color from white to green the first time you walk on a segment of a line. When all segments surrounding a rectangle are green, the rectangles will be filled.

There are two types of booataris: an orbiter than continually makes counterclockwise circuits around the outside of the maze, and amidars which follow the rules of "ghost legs". Amidars start on the top of the maze and move downward. When the reach a horizontal branch, they must take it. Once they reach the end of a branch, they will resume their downward direction. When they reach the bottom, they will move left or right to a different vertical line and begin travelling upwards, again following the same rule that when they hit a horizontal line, they must take it.

While moving up and down, the amidars behave deterministically: there is no randomness at all. The only random bit of their movement is choosing which line to start down (or up) when reaching the top (or bottom).

As coded for the HackFest, the game has a single screen and is a single player game. At this point, nothing happens when completing the maze. I ran out of time during KansasFest.

I am planning on adding:

By design, the "pac-man" bug is present so the player and an amidar can pass through each other if they happen to exchange grid squares in a single turn. In practice this happens more often than I thought it would, so I'll have to readdress this.

After you lose all your lives and restart (by pressing any key), the amidars will work correctly until they get to the bottom, after which one will continue going down after the bottom row and stomp all over memory and crash. I still haven't been able to debug this.