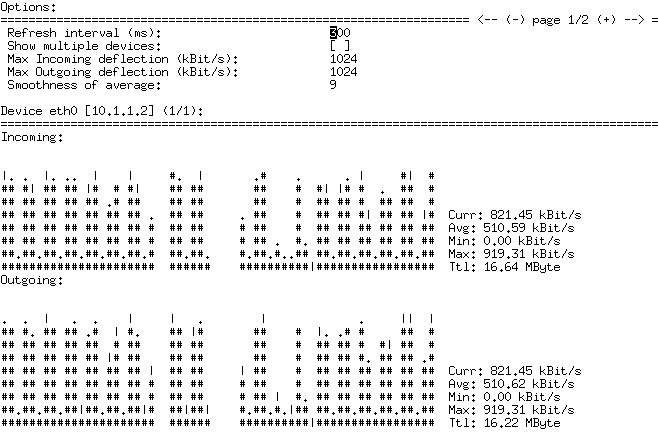 nload is a console application which monitors network traffic and bandwidth usage in real time. It visualizes the in- and outgoing traffic using two graphs and provides additional info like total amount of transfered data and min/max network usage.

If you downloaded a snapshot from GitHub, you need to install automake and run ./run_autotools.

To install nload, you have to be root: sudo make install.

You can find more detailed information in the file INSTALL in this directory.

To learn about the command line switches and the usage of nload in general, simply run nload --help. Alternatively, there is a man page available by typing man nload.

If you want to uninstall nload run make uninstall in the build directory.

If you have problems with compiling, installing or using nload, mail me at feedback@roland-riegel.de.

You should have received a copy of the GNU General Public License along with this program; if not, write to the Free Software Foundation, Inc., 59 Temple Place - Suite 330, Boston, MA 02111-1307, USA.