Apprentice is a dark, low-contrast colorscheme for Vim based on the awesome Sorcerer by Jeet Sukumaran.

It is essentially a streamlined version of the original, with a reduced number of colors entirely taken from the default xterm palette to ensure a similar look in 256colors-ready terminal emulators and GUI Vim.

Some code in MacVim: 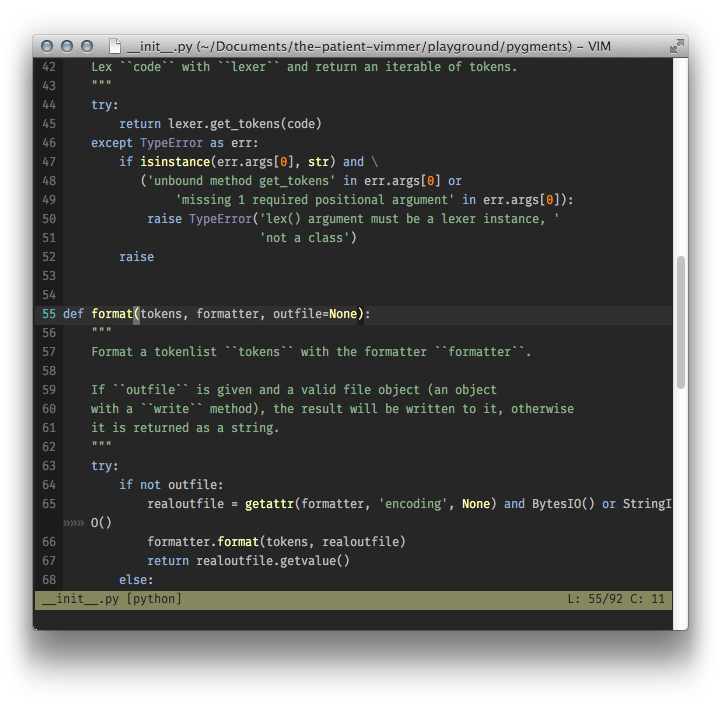 Some code in iTerm, with TERM=xterm-256color: 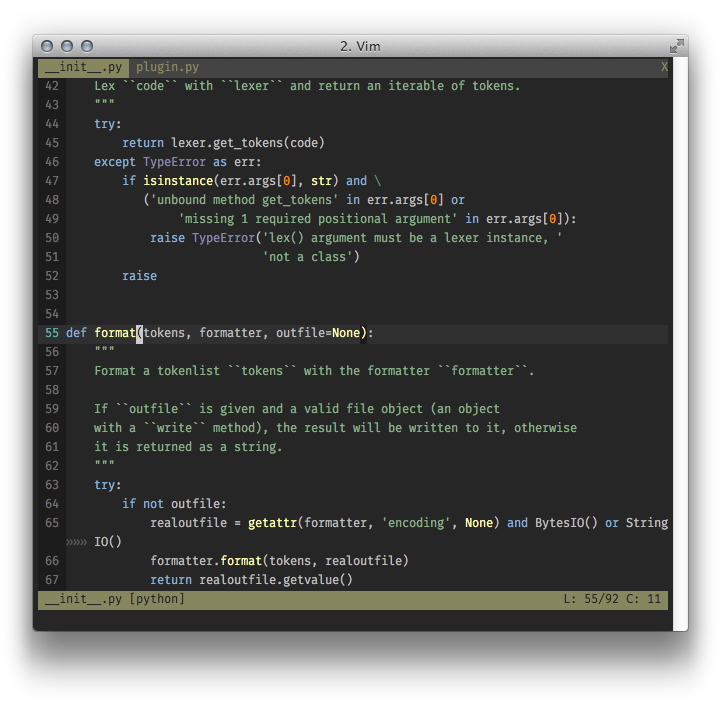 Some code in mintty, with TERM=xterm-256color: 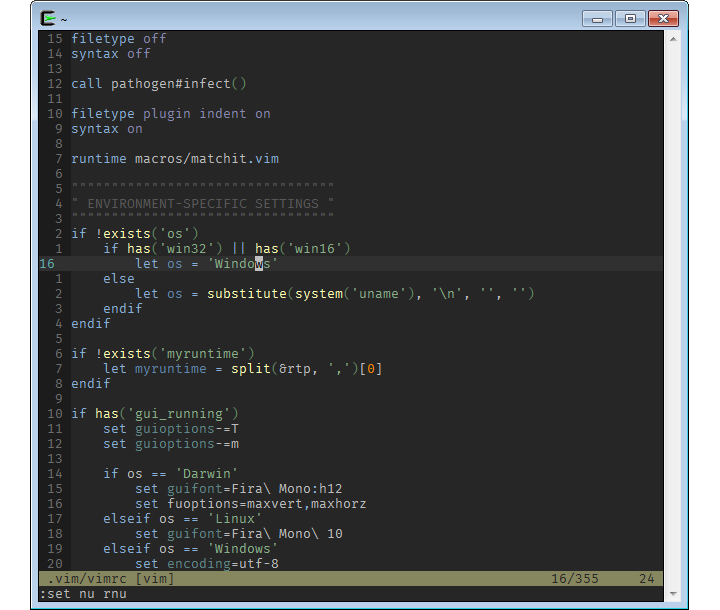 Some code in iTerm, with TERM=xterm, using the Tango color palette: 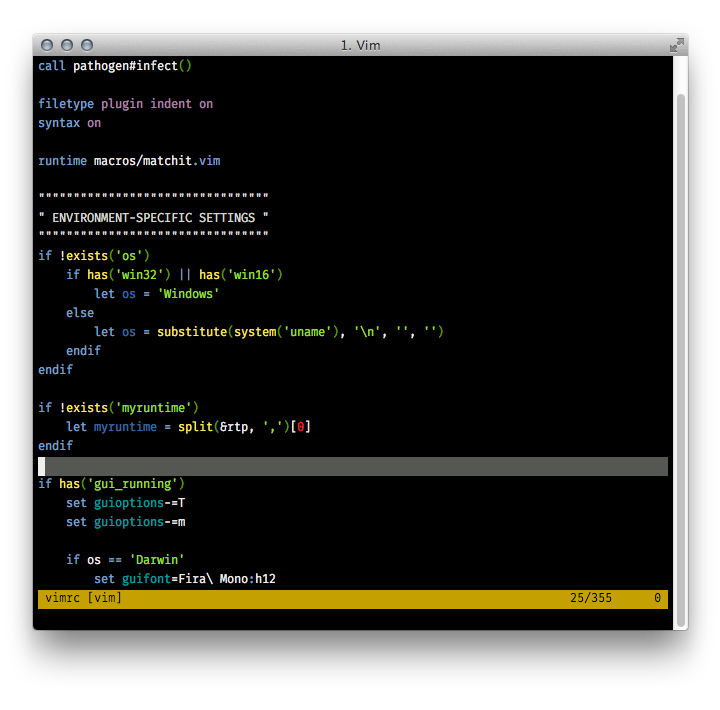 Apprentice is designed first and foremost to look “good” in terminal emulators supporting 256 colors and in GUI Vim (GVim/MacVim). It supports lesser terminal emulators in the sense that it doesn’t break but it will definitely look “better” in more capable environments.

There is nothing to do for GVim/MacVim as GUI Vim supports “True Color” by default.

Since January 2016, Vim has been able to talk in “True Color” to terminal emulators supporting that feature. This means that it is now not only possible but also very easy to have the exact same colors in TUI Vim and GUI Vim.

In practice, this new development doesn't change much for Apprentice which uses the exact same colors in the GUI as it does in the TUI anyway. But you can still try “True Color” if your setup satisfies the requirements with the following command:

See this gist for more information and support status and, of course, :help 'termguicolors'.

Most terminal emulators in use nowadays can display 256 colors but most of them use a default TERM that tells Vim otherwise. Assuming your terminal emulator actually supports 256 colors, you must instruct it to brag about its terminal-hood by setting the correct TERM environment variable.

The “ideal” TERM usually includes the string 256color, like xterm-256color. The actual value is highly dependent on your terminal emulator and/or your terminal multiplexer, though, so you will have to refer to their manual.

As an alternative to changing your default TERM to xterm-256color or similar, you can keep its default value (usually something like xterm or screen) and set your terminal emulator to use the Apprentice colorscheme instead of its default colors.

The table below contains a subset of Apprentice’s palette. You can use a color picker or copy/paste these values:

Here is a sample ~/.Xresources for you Linux/BSD users. You can import this into terminal.sexy to convert it to the appropriate color scheme format for your preferred terminal emulator:

And a sample ~/.minttyrc for you Cygwin users:

Some code in iTerm, with TERM=xterm, using the color palette above: 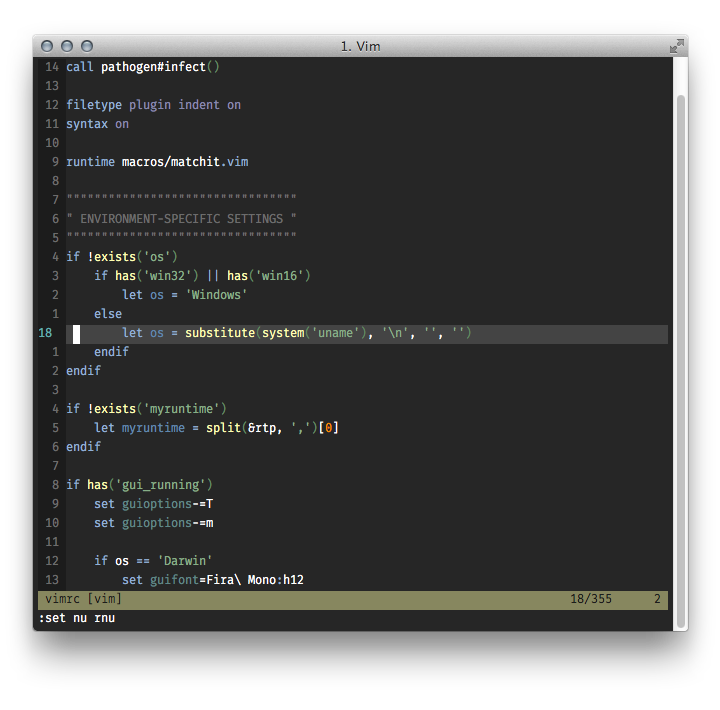 Some code in the Windows console, with TERM=cygwin, using the color palette above: 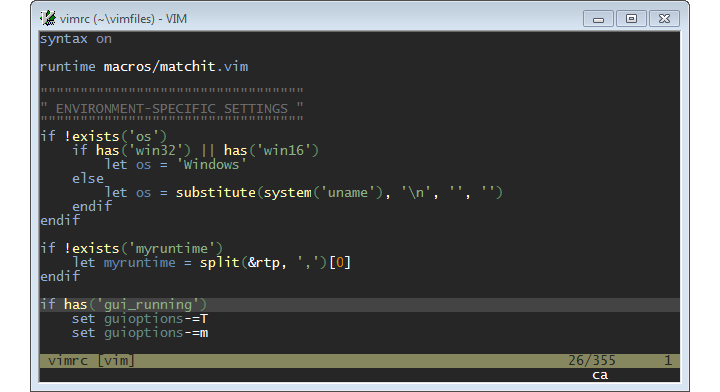 I recommend adjusting your terminal's background color to the one used in Apprentice if you want to avoid having a “frame” around Vim:

Colorschemes must be placed in a directory named colors that is somewhere in Vim’s runtimepath:

The canonical location is:

but it could be:

or whatever works for you.

Arch users may be happy to hear that Apprentice has landed in AUR. To install it, use an AUR helper:

To test Apprentice, just type this command from normal mode and hit Enter:

If you like what you see and want to make Apprentice your default colorscheme, add this line to your vimrc, preferably near the end, after any syntax enable, syntax on, filetype ... on, call plug#end(), or call vundle#end() line:

If you don't want to maintain your own fork of Apprentice you can add something like this to your vimrc, before colorscheme apprentice:

See this Gist for reference.

Apprentice now comes with the very template used to generate it: colors/apprentice.erb. The template, based on vim-rnb, is well maintained and documented.

If you feel like making a pull request, make sure you commit both the modified template and the modified colorscheme.

I removed them from master but you can still find them in the "fancylines-and-neovim" branch.

I removed it from master but you can still find it in the "fancylines-and-neovim" branch.

What they say about Apprentice.