Stale — Scrup is no longer being developed. It's left here for the sake of the codez. For a great and secure (encrypted) screenshot service that's as free as Scrup, I'd recommend the screenshot feature of Dropbox. 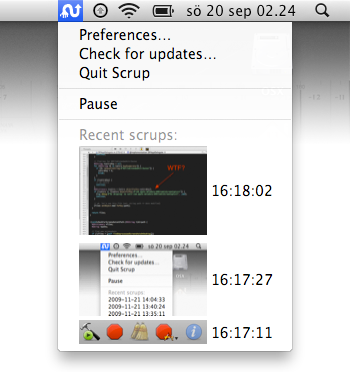 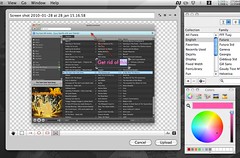 Take a screenshot in OS X and have a URL to the picture in your pasteboard a second later.

There are a few forks (alternate versions) of Scrup (e.g. adding Growl support, playing sounds, etc) which might be interesting. Check out the fork network for a list of these variants.

There is an example PHP implementation called recv.php which you can use and/or modify to setup your receiver. Make sure to set your URL in the preferences.

You'll need libpngcrush to build Scrup. libpngcrush is an external submodule of Scrup which you'll need to update after you've checked out the scrup source:

You only need to do this once. Now, build the "Scrup" target in Xcode.