The fecon series of computational tools for financial economics began around 2014 at U.C. Berkeley when Jupyter notebooks were known as IPython notebooks (file extension .ipynb is an artifact of that era). BIDS, Berkeley Institute for Data Science, was just getting established. The joint seminars by the Economics Department and the Haas School of Business, run under the designation 235, needed tools to replicate their findings with publicly accessible data and code.

The Python scientific ecosystem was complicated and the documentation was murky, constantly in flux, at that time. Also there was a transitional barrier between python2 and python3. To address these needs, fecon235 developed, starting with datasets obtained through the U.S. Federal Reserve Bank.

Development occurred bottom-up through experiments replicable in notebooks. The open source repository at http://git.io/fecon235 housed illustrative notebooks, designed to serve as HOWTO examples, and the application code was abstracted from such experimentation. In retrospect, we see that:

In 2018 we address the critique by designing fecon236 top-down so that the structure of the code is refined, providing a solid foundation for future development. It shall consist only of refactored application code and its tests, excluding the notebooks.

The new architecture allows us:

The tools for financial economics started out as IPython notebooks at fecon235 https://github.com/rsvp/fecon235 in 2014. Four years later the source code derived from the patterns and idioms used in rebranded Jupyter notebooks was refactored at fecon236 https://github.com/MathSci/fecon236 and integration tested under both python27 and python3.

The two repositories are curated wrappers over the Python and Jupyter ecosystems. The notebooks will be continue to be developed in the fecon235 nb directory https://git.io/fecon235nb serving as usage examples and templates for research, while the source code behind the notebooks will be supported at fecon236.

Q: How do I INSTALL and start using fecon235?

First: fork, clone, or download a copy of our project from GitHub.

Second: our project has external package dependencies which can be easily fulfilled by Anaconda. If you are new to the Python ecosystem, we would highly recommend that free distribution which includes Jupyter, IPython, numpy, pandas, matplotlib, etc.

Optional: to run old fecon235 code make sure your local fecon235 top directory is under the scope of your PYTHONPATH, a system variable. PYTHONPATH is used by the Python interpreter to determine which modules to load.

The most important fecon235 assets are the notebooks located in the nb directory (which is explicitly not a package). Please see the introductory notebook at https://git.io/fecon-intro to get started.

Ideally, fork, clone, or download a copy of our project from GitHub. A fork will allow you to later make pull requests. Community development of the code is an important aspect of the project.

OK, but there is also the quick way: pip install --pre fecon236

The --pre flag will include the latest version which is stable enough for the non-developer user. Of course, it can be used in conjunction with the --upgrade flag. To remove the project completely: pip uninstall fecon236

As for satisfying external dependencies, we recommend the Anaconda distribution which properly handles binaries (for computational speed, e.g. MKL Math Kernel Library) for all operating systems, and correctly performs dependency resolution (unlike PyPI). Pro tip: get the conda-aware version of pip by conda update pip before pip-installing fecon236.

If you insist on satisfying the dependencies manually, we have provided information for a proven deterministic build via required.txt

One everything is installed, only one further command suffices: import fecon236 as fe

We adopted absolute_import throughout this project, which is a feature compatible with python27, also making fecon236 easy to incorporate into other projects.

Q: Where is the documentation?

The most current user documentation can be found in the docs directory, however, the source code is thoroughly documented with useful comments.

The best way to learn about the user-friendly code is to pick a Jupyter notebook on a topic which interests you, and then to work interactively with it for analysis, see the nb directory.

Q: Are there online discussions? Help?

Q: How do I report a bug, or suggest enhancements?

Chat with us first, then also check the Issues section of repositories.

Q: How do I retrieve economic off-beat FRED data series?

To access data from the U.S. Federal Reserve Bank, each economic time series and its frequency has its own "fredcode" which is freely available at their site FRED.

Q: How do I retrieve data from Quandl?

The same idea as FRED above. For example, d7xbtusd='BCHAIN/MKPRU' which is for the Bitcoin price in USD (d7 indicates that the data is 7 days per week). The quandlcodes can be found at Quandl, however, use Google search with keyword "quandl" for better results.

Q: How do I retrieve data series for equities?

We use a special string called "stock slang" in the format "s4symbol" where symbol is spelled out in all lower-case.

Note: there has recently been upstream disruption in getting equities data, please consult 235is7 for remedies.

Q: Where is the package map for fecon236? 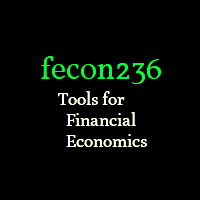