(Imagine some neat audio effects going off while you're reading the name, above. And yes, I know there's a "Perl Runner" for Mac that'll set you back $1.99. But, one, the name's not copyrighted. Two, there's no space in PERLRUNNER!!!1!.)

The exe is here: PerlRunner.exe

USE AT YOUR OWN RISK!

That should work on most recent Windows boxes. Raise an issue if you have any trouble. 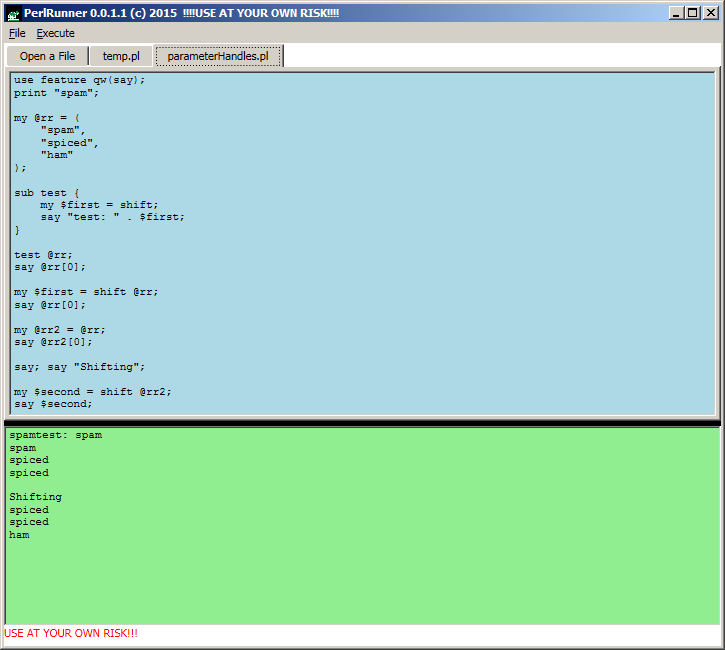 PerlRunner is MPL 2.0 licensed. See included LICENSE file for the license in its entirety.

Feeling a little like a Connecticut Yankee in King Arthur's Court, I unfortunately stumbled into a project at work that required Perl maintenance in 2015. And I noticed that, except for Padre, there wasn't an obvious, free Perl IDE, and Padre doesn't seem to like Strawberry right now.

And editing in one window, alt-tabbing, cursor up-ing, return-ing, and alt-tabbing back to fix your bugs gets old really quickly. How in the world is it that Open Perl IDE is the closest we've got to a free, native, easy to install dev environ for Perl on Windows, and it no longer works at all? I'm worried about Jürgen Güntherodt, honestly. Hope he's okay.

So I wanted to F5 my way through learning Perl, and took an afternoon to learn and hack a little WPF and XAML. Keep your Tk craziness away from me.

Check. That's really all PerlRunner does.

Yeah, that's about it for features right now.

Note: You can set the -l & -W options with the Execute >>> Use -[l or W] option menus. Both are on by default, and reset to on each time PerlRunner is opened.

Right now all it does is open files (that don't share the same file name), no syntax highlighting, and no options.

Stuff I'll probably add if I stay stuck in Perlland.

Adding debugging [really] isn't [as] insane [as it sounds]. Perl has its own debugger. This from LinuxJournal is supposed to be a decent intro. I think you could manage marshaling text to and from the debugger running on the command line reasonably easily (ie, straightforwardly).

None of those things are likely. If you're lucky, I'll remove the colors on the text boxes I was using to test my XAML. It's my first WPF app! Woohoo! Channel9, here I come!!

Honestly, I know there has to be something somewhere on Windows that'll do this. I can't believe I couldn't google it up in ten seconds or less, but could google up ten different ways to run Perl in a GUI on *nix. It's Perl, for goodness sake. I've been hearing about people using this "language" for 20 years, and I'm still reasonably young. Does nobody do -- or even learn -- Perl on Windows?

Anything doesn't work? Open an issue!