The GPU plugin requires Windows (7, 8, or 10) or Linux, a GPU with support for OpenGL 4.3 or newer, and 2GB of VRAM. This requires either a Nvidia GeForce 400 or newer, an AMD Radeon HD 5000 Series or newer, or Intel HD Graphics with an Intel Haswell processor or newer. Also, ensure that your GPU drivers are up to date.

There are possibly configurations it does not work correctly on. In particular, we recommend you do not enable it in dangerous situations ingame (HCIM!) until you sufficiently test that it is stable on your system.

How do I get GPU plugin?

Exit your client and launch it again to update. Ensure you are using a supported operating system and graphics card (see above). You can then enable the plugin "GPU" on the plugin sidebar.

The plugin keeps turning itself off!

The plugin will turn off automatically if it is not supported on your current setup. If you do meet the troubleshooting steps below.

The game crashes as soon as I turn on the plugin!

Try disabling Hardware Acceleration. Otherwise, make sure that your system meets the requirements.

I meet the ALL the requirements, but it still won't turn on or is very laggy?

If you have a Nvidia GPU, make sure you are using the 32 or 64 bit version of RuneLite, not the For All Platforms Version. Then go into NVIDIA Control Panel -> Manage 3D settings -> Program settings. Click Add and find RuneLite on the list, add it. In the drop-down, select High-Performance. When finished, it should look something like this: 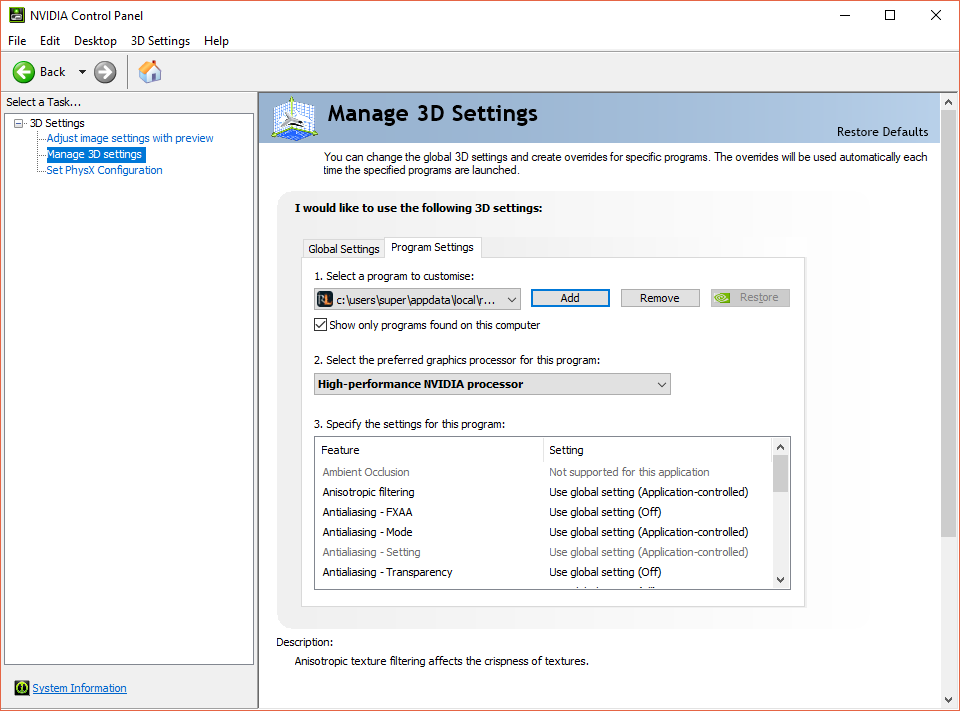 When i turn on Anti Aliasing weird lines appear

If you have an AMD graphics card, roll back the driver to version 18.12.1

I'm getting incredibly high memory usage while using the GPU!

If you have an AMD graphics card, roll back the driver to version 18.12.1

My client turns black when I enable the plugin!

There are two mouse cursors when GPU is on

If you have a program called playstv, turn it off.

If you're on Windows, open task manager and kill any jogamp_exe_tst processes twice (they'll have random numbers after the tst). This may need to be done during RuneLite startup if the GPU plugin is still set to enabled.

When will there be support for macOS?

The GPU plugin is Windows/Linux only for now. The RuneLite team wants it to be available to other operating systems, it is a work in progress with no ETA.

Why can't I click as far as I saw before?

What is the maximum draw distance?

The client will only display loaded regions regardless of draw distance settings.

It is being considered as an improvement, no ETA.

Why can't my camera fly around?

The Orb of Oculus functionality is not part of the GPU plugin.

I have weird lines all over the screen

How can I disable GPU plugin if the client does not open?

Please join our Discord if you notice anything wrong or would like to discuss an addition to the wiki.