The Party plugin allows up to 15 users to group together.

Note: This feature requires the Discord plugin to be active

You'll be able to see your party member's Health and Prayer 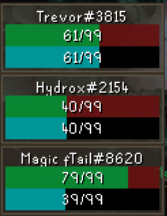 Party Members can Shift Left Click to "ping" a tile, which will show up for all party members.

Party Members will show up on the world map 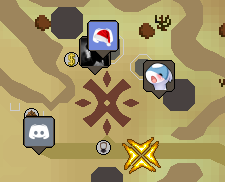 If you're using the Special Attack Counter plugin, the Party plugin will track the special attacks done by your party members

If you're using the DPS Counter plugin, the Party plugin will allow you to see the DPS of everyone else in your party as well

How to Create a Party

To start a party, you need at least 2 people.

First, create a party from within the 'Party' plugin in the sidebar.

Then, have one player ask another to join their party. This is done by clicking on their Discord avatar, or by going to their profile. You must be friends with that user on Discord to be able to do this. 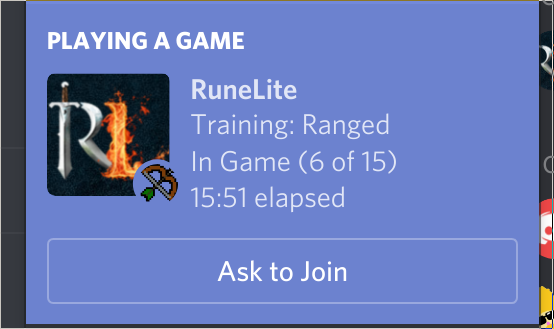 Once the request has been sent, the user who's being joined must accept the request. This is done at the top of the Discord client

Once the request has been accepted, the requester must press the Launch and Join button at the top of their Discord to be added to the party.

Congratulations! You have created a party!

But why stop there? To add more users to the party, either get them to join the same person the first one joined, or click the + to the left of the chatbox in Discord to send an open invite to a channel.

Note: Channel invites can only be used after a party has been created. Always start by having someone join someone else directly

To leave, shift right click on the party interface and select Leave

The users Alice, Bob, Carol, and Dave want to make a party together. In this example, Carol asks to join Bob. Once they're in the party, Alice and Dave must ask Bob if they can join the party. They then all go off and stab the Corporeal Beast.

Please join our Discord if you notice anything wrong or would like to discuss an addition to the wiki.