UEFI is the successor to the BIOS. It provides an early boot environment for OS loaders, hypervisors and other low-level applications. While it started out as x86-specific, it has been adopted on other platforms, such as ARM.

This crate makes it easy to both:

The objective is to provide safe and performant wrappers for UEFI interfaces, and allow developers to write idiomatic Rust code.

Check out @gilomendes blog post on getting started with UEFI in Rust.

Note: due to some issues with the Rust compiler, this crate currently works and has been tested only with 64-bit UEFI. 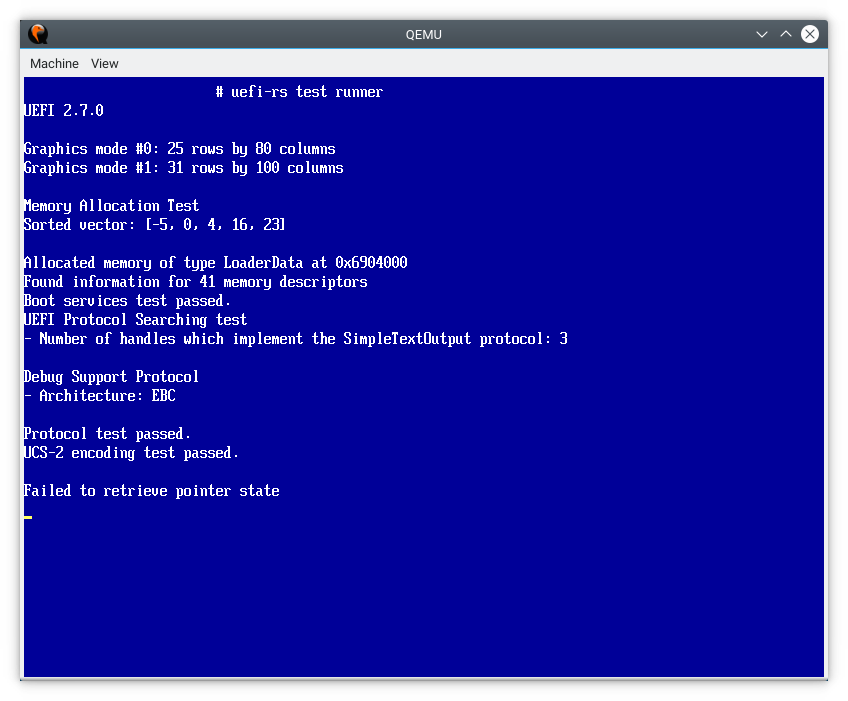 Building kernels which use UEFI

This crate makes it easy to start building simple applications with UEFI. However, there are some limitations you should be aware of:

In other words, the best way to use this crate is to create a small binary which wraps your actual kernel, and then use UEFI's convenient functions for loading it from disk and booting it.

This is similar to what the Linux kernel's EFI stub does: the compressed kernel is an ELF binary which has little knowledge of how it's booted, and the boot loader uses UEFI to set up an environment for it.

The docs for the latest published crate version can be found at docs.rs/uefi/

This crate's documentation is fairly minimal, and you are encouraged to refer to the UEFI specification for detailed information.

An example UEFI app is built in the uefi-test-runner directory.

Check out the testing README.md for instructions on how to run the crate's tests.

For instructions on how to create your own UEFI apps, see the BUILDING.md file.

The code in this repository is licensed under the Mozilla Public License 2. This license allows you to use the crate in proprietary programs, but any modifications to the files must be open-sourced.

The full text of the license is available in the LICENSE file.