Lightning talk about the various Elixir directives and their purpose(s) 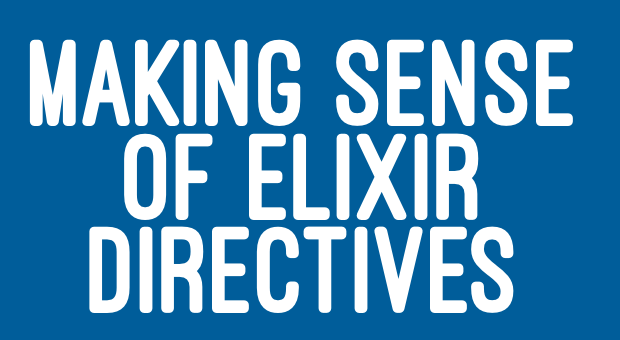 This is a lightning talk I gave at the Triangle |> Elixir group discussing the purpose of the various Elixir directives (which I find to be confusing for new Elixirists).

^ Elixir has four, all with slightly different purposes. Based on conversation I was having I find them confusing so I dug in a bit

^ Wrote up my gripes, presented them to Jose & Chris McCord. Summary is they agree it's confusing, but have a hard time figuring out how to change things already set in motion. So, this is my effort to add some clarity to the situation.

^ What are Elixir's directives?

^ Last one might not technically be a directive, but it's so closely tied to the purpose of directives that I'm going to abuse the term and include it

Used to reference a module in short-hand

Used to easily access functions or macros from other modules

^ Can import all or some functions

^ Seems like this is just special form of alias, yeah?

Used to make sure module is compiled and available

^ Ok, but when don't I want the thing to be compiled and available?

^ Turns out, so you can have circular dependencies, so use alias to soft-reference modules by default

^ All are lexically scoped

^ Biggest beef is that directives are implementation specific

^ Shouldn't have to think about these things as a user

Lightning talk about the various Elixir directives and their purpose(s)