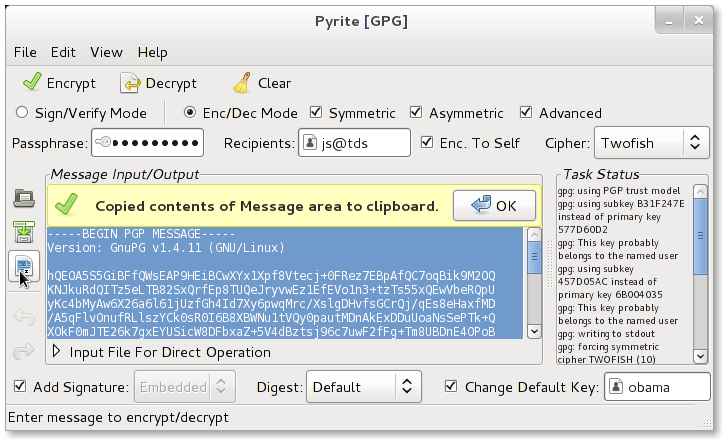 There's an RPM (and yum repository) @ people.redhat.com/rsawhill/rpms. To configure it and install Pyrite, simply run the following as root:

As per above, Pyrite is not compatible with RHEL6.

There is a simple interactive shell installer. Before using it, ensure you have the following on your Linux system (Ubuntu package names):

If requirements are met, clone the Pyrite repo with git clone git://github.com/ryran/pyrite.git OR download a zip of the source.

From the root source folder execute the interactive INSTALL script. 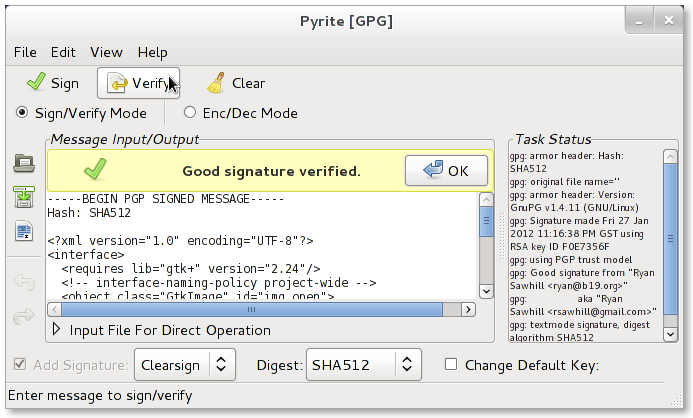 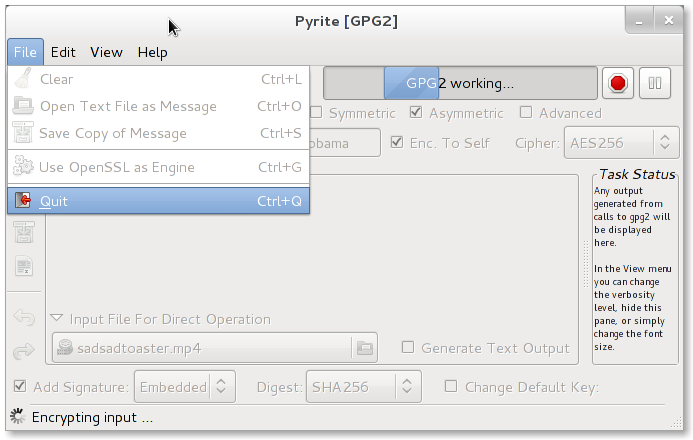 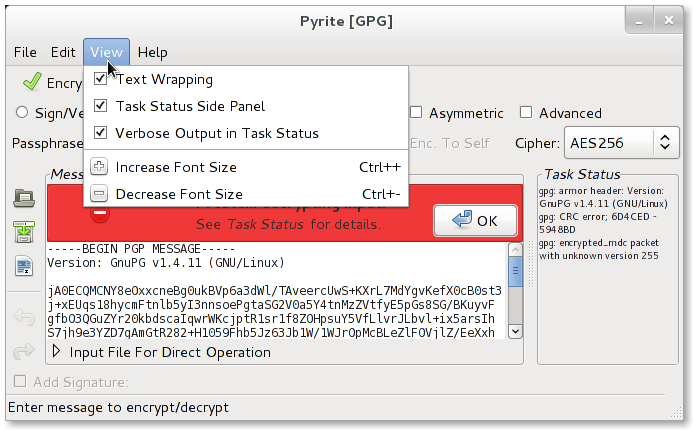 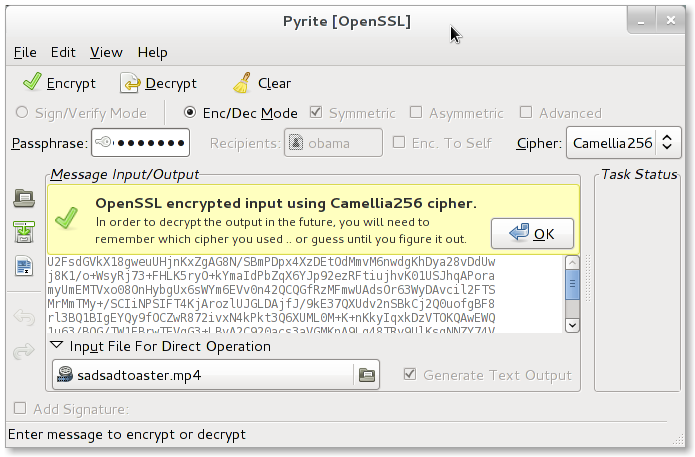 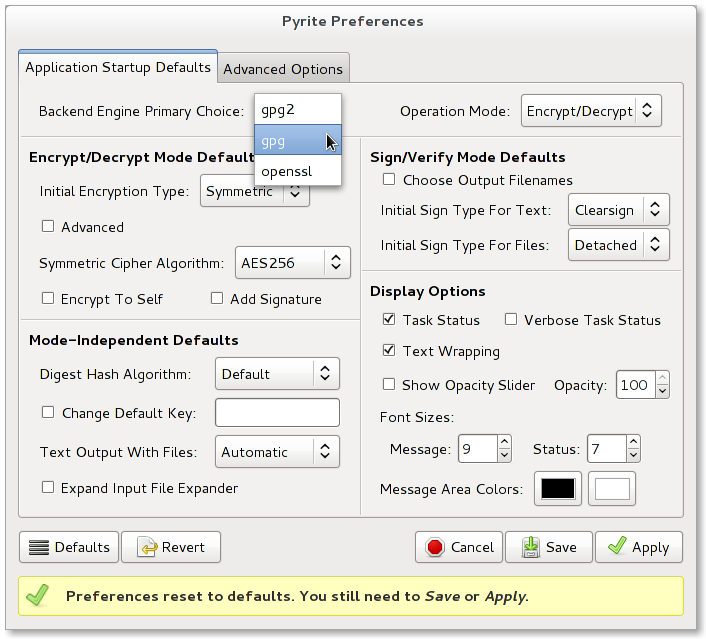 Pyrite can operate on text input or can take input and output filenames (text or binary) to pass directly to the backend program (i.e., gpg/gpg2 or openssl).

As you can see from the screenshots, Pyrite can utilize virtually all of the encrypting features of GnuPG -- you can mix and match passphrase & public-key encryption & signing with one file, just like gpg, which will require interacting with your gpg-agent. Or you can keep it simple and just use a passphrase as a shared key, in which case gpg-agent is bypassed and you only have to type the passphrase once.

Also shown in the screenshots is a Sign/Verify mode, where you can choose between the three types of signing: normal (Pyrite calls it "embedded"), where a signed copy of the message is created; clearsign, where the message is wrapped with a plaintext ASCII sig; or detached-sign, where a separate sig file is created.

If you're operating directly on files (in sign or encrypt mode) instead of ASCII text in the Pyrite window, you can choose what kind of output you want -- ASCII-armored (base64-encoded) text or normal binary output.

If you end up working on very large input, you'll get a chance to really see the progress bar + pause/cancel buttons. At the moment the progress bar doesn't report actual progress (that's coming), but the buttons do what they advertise, pausing or canceling the backend processing.

To top it all off, everything is configurable. There's a preferences dialog that lets you play with all the settings, from tweaking gpg verbosity to setting the default operating mode to choosing your favorite cipher to configuring font size/color and window opacity.

If you find yourself wondering about a particular feature, just hover your mouse over its widget -- there are detailed tooltips for everything.

The original goal of this project was to make symmetric {en,de}cryption more accessible and easy to use. While GPG rocks if you're comfortable on the commandline (for both symmetric & public-key), and there are GUI encryption options for public-key encryption (seahorse-plugins for nautilus being the best, in my opinion), there's not much out there for people who need to do the simplest kind of encryption -- with a shared passphrase.

After creating a few simple apps with BASH scripting, I decided it was time to learn Python. After the first few days I was in love.

Long story short, after a couple weeks of learning, I released my first version of this project in January 2012, quickly added public-key encryption, signing, & verifying, and have been improving it ever since. This being my first learning experience with GTK+, I have lots more to learn, but I'm damn proud of Pyrite.

PLEASE contact me (or post a new issue on the tracker) with any suggestions, feedback, bug reports, or questions!

As far as direct contributions go, so far it's just me, ryran, aka rsaw, aka Ryan Sawhill Aroha.

Feel free to contribute! The project could really use a little assistance from an artist -- it doesn't have an application icon. (!) Also, it could use icons for the encrypt, decrypt, sign, and verify buttons.

This program is distributed in the hope that it will be useful, but WITHOUT ANY WARRANTY; without even the implied warranty of MERCHANTABILITY or FITNESS FOR A PARTICULAR PURPOSE. See the GNU General Public License @gnu.org/licenses/gpl.html for more details.

Oh. You must be wondering why the name Pyrite, eh?

Well, I'll let my friend River--who came up with the name--explain it to you:

"It should be 'Pyrite', because people think they are getting your data, but really it's just gibberish to them. Fool's gold."