Themer is a colorscheme generator and manager for your desktop.

Themer is a colorscheme generator and manager for your Linux desktop.

Install python-themer-git with the AUR manager of your choice, for example trizen:

or perform a manual build if you prefer:

themer is now available in the PyPi repository as well. You can use a pip to install it:

First, check out the git repository:

You can create multiple template dirs for themer in ~/.config/themer/templates. The default template is i3, see data/default for the default configuration.

Everything Themer does happens in .config/themer/. In short, things are created from templates and end up in current.

In a running setup this directory will contain the following:

For most people templates only holds 1 directory (called i3 by default) for their setup. If you like to switch your DE or the general appearance of your window manager you might want to add more of them. If you are only interested in small changes like colors and wallpapers (which don't change the structure of your configs, only the details) you are probably fine with one. (This is an abstraction layer which exists for historical reasons and might be removed in the future).

So what does a template look like? A useful template contains:

Integrating Themer with your Setup

All the following steps will show you how to use themer to generate themes, but you also need to configure your DE to use the generated theme.

themer does not assume anything about the tools you use in your DE, you need to tell your DE about themer. The current theme will always be available in $XDG_HOME/themer/current (usually .config/themer/current). To use themer, symlink the seperate files from there to their destination.

For example, this is how to set up i3 with themer:

Generate a theme from a wallpaper:

...or install a colorscheme from sweyla.com:

you can also use an Xresources-style file:

Plugins enable you to generate themes from other sources as well, see below.

You can activate an existing theme with themer activate:

This will symlink all defined templates to ~/.config/themer/current. You should, in turn, symlink all the global configuration files to there. For example for i3:

To view the currently activated theme's colors use themer current.

If you have modified the templates or a themes colors.yaml, activating the theme again will not apply those changes. Instead use themer render to update your configuration:

You can also re-render all of your themes (for example if you changed a lot in your configuration) by supplying all instead of a theme's name: 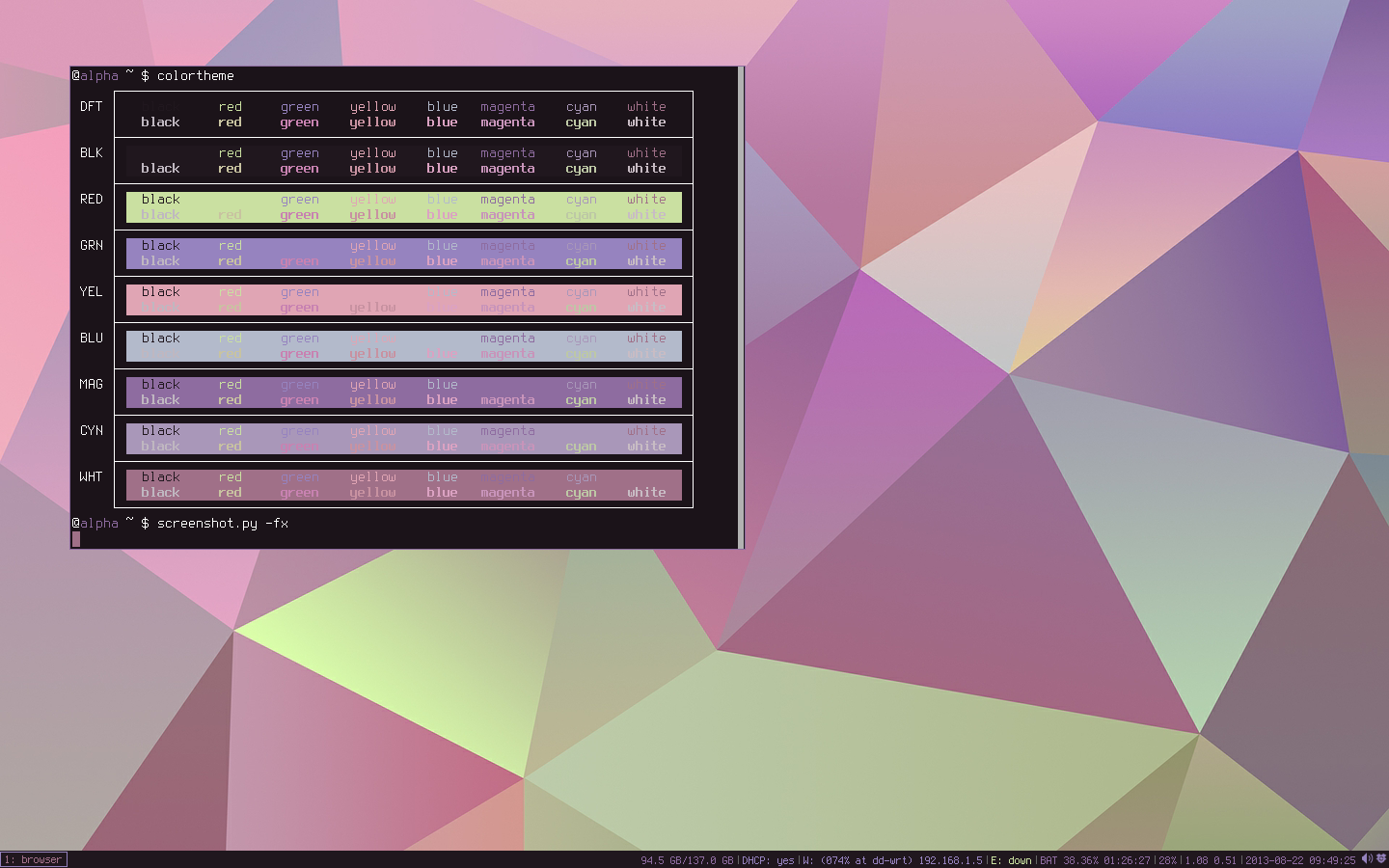 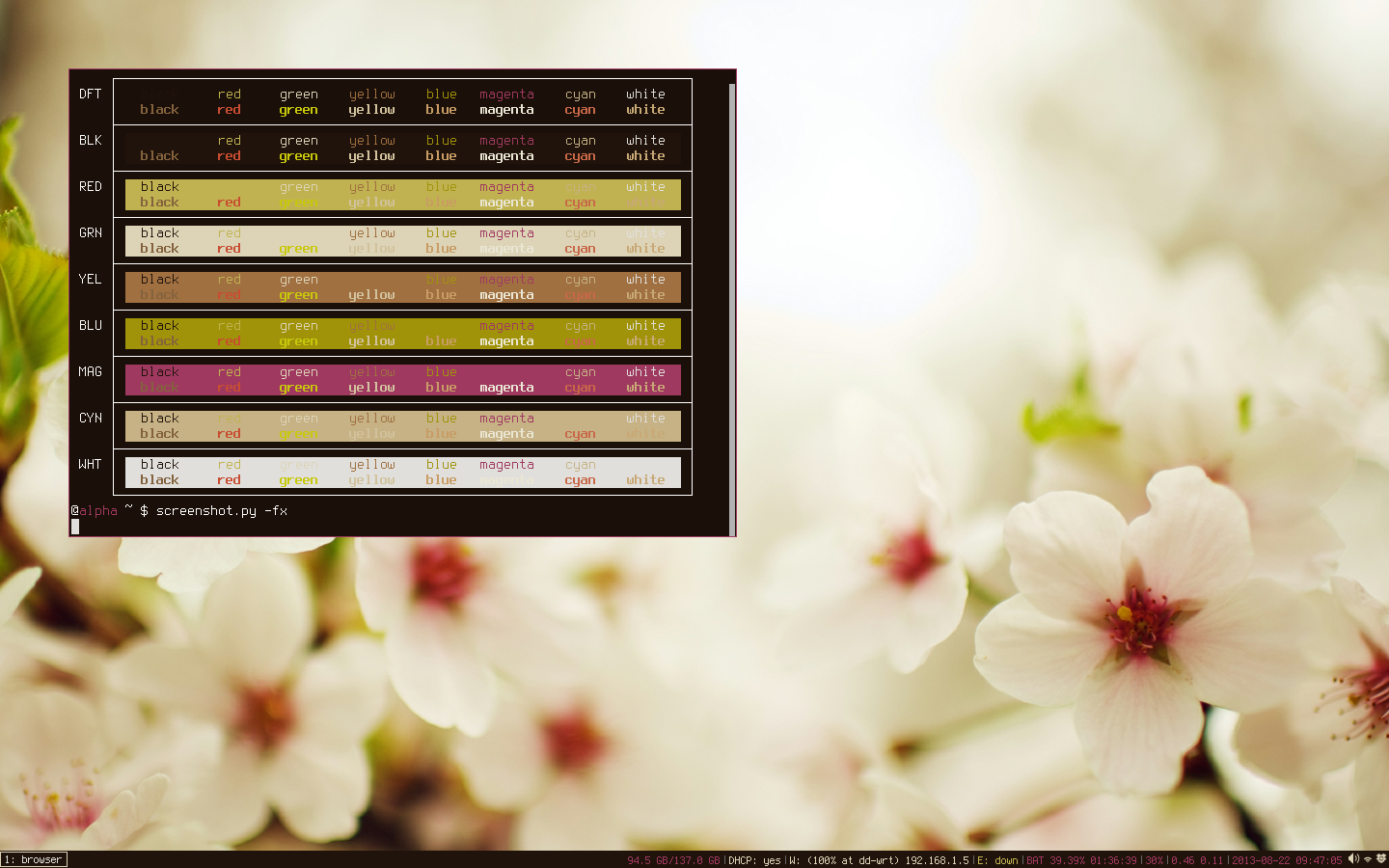 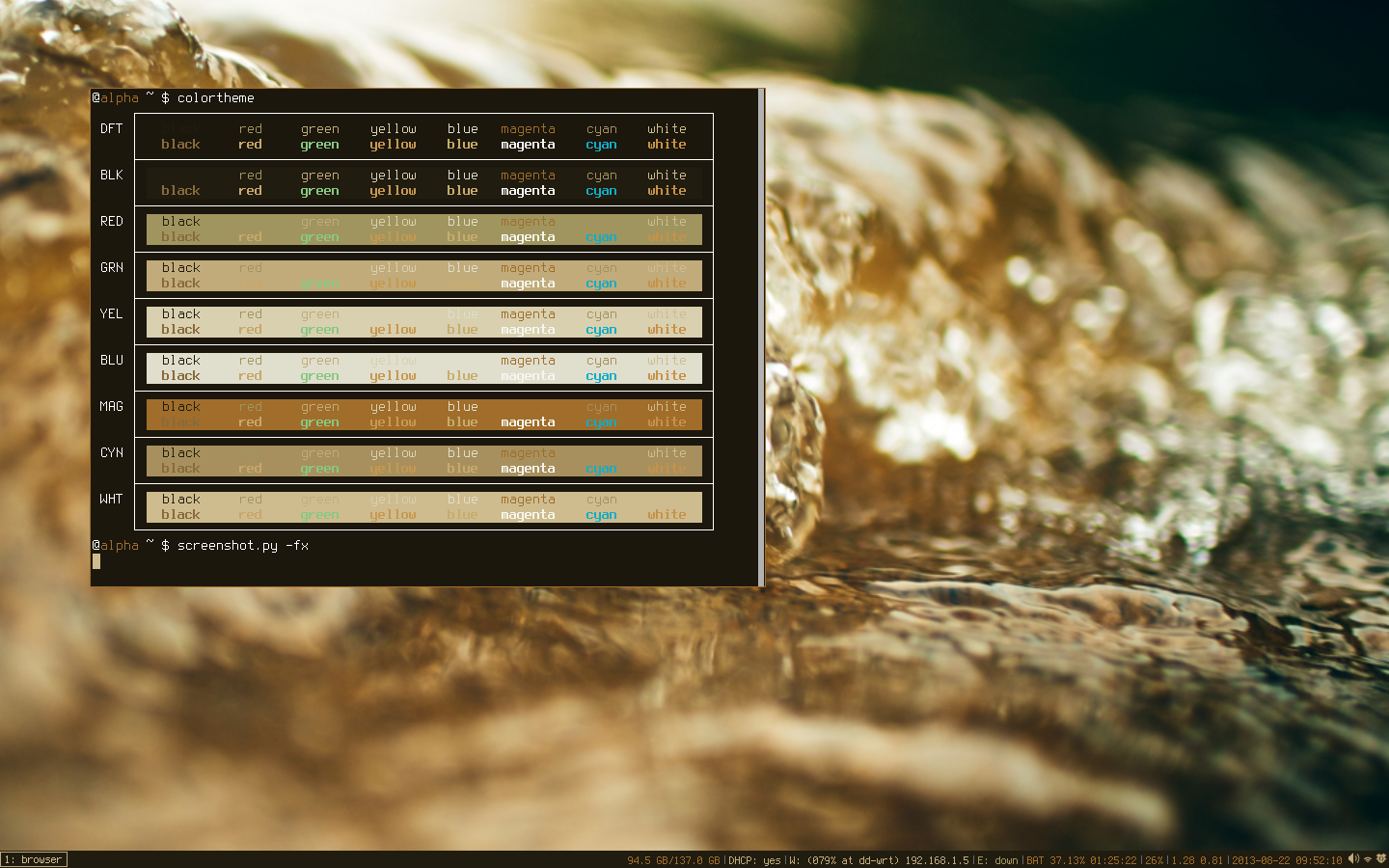 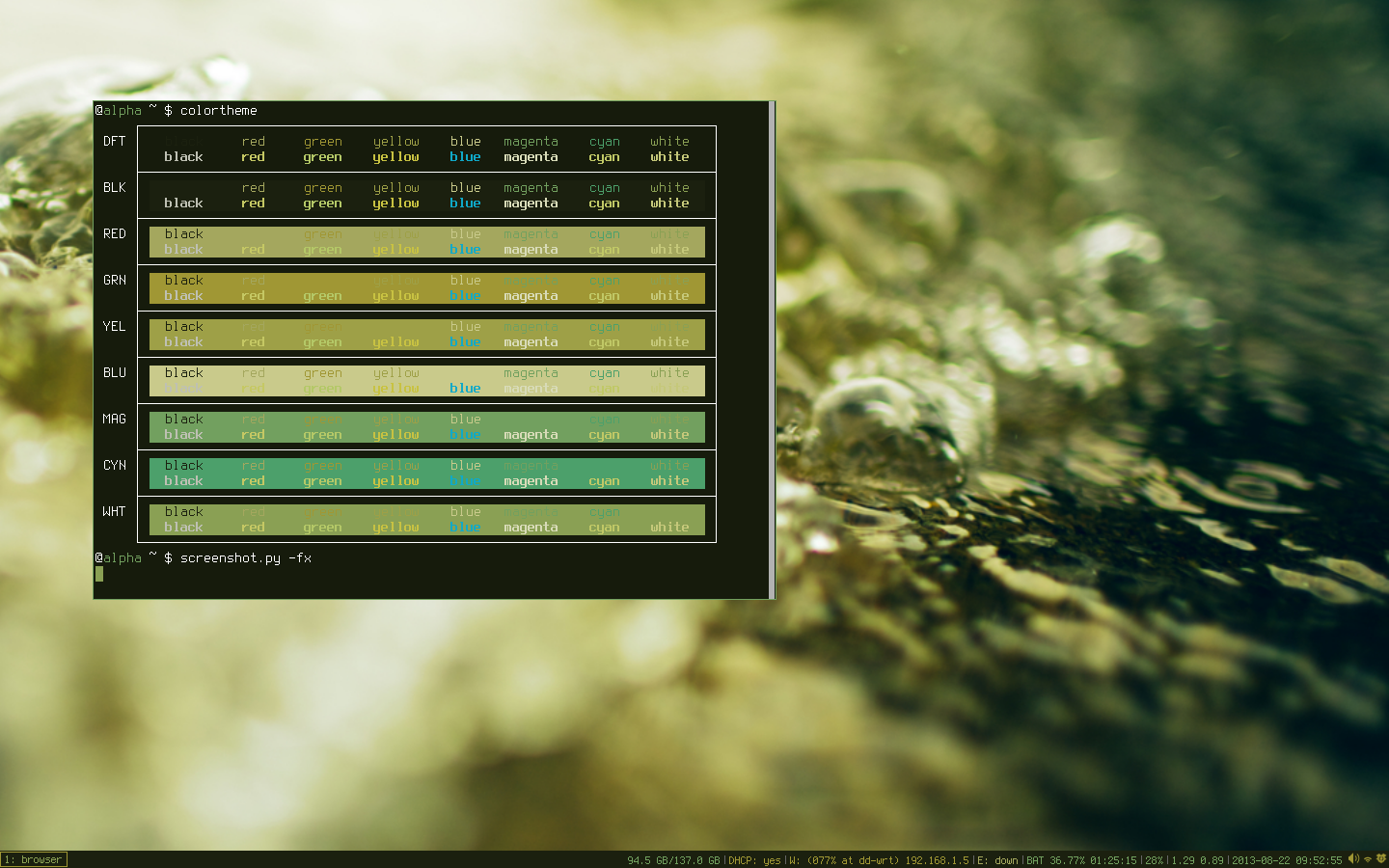 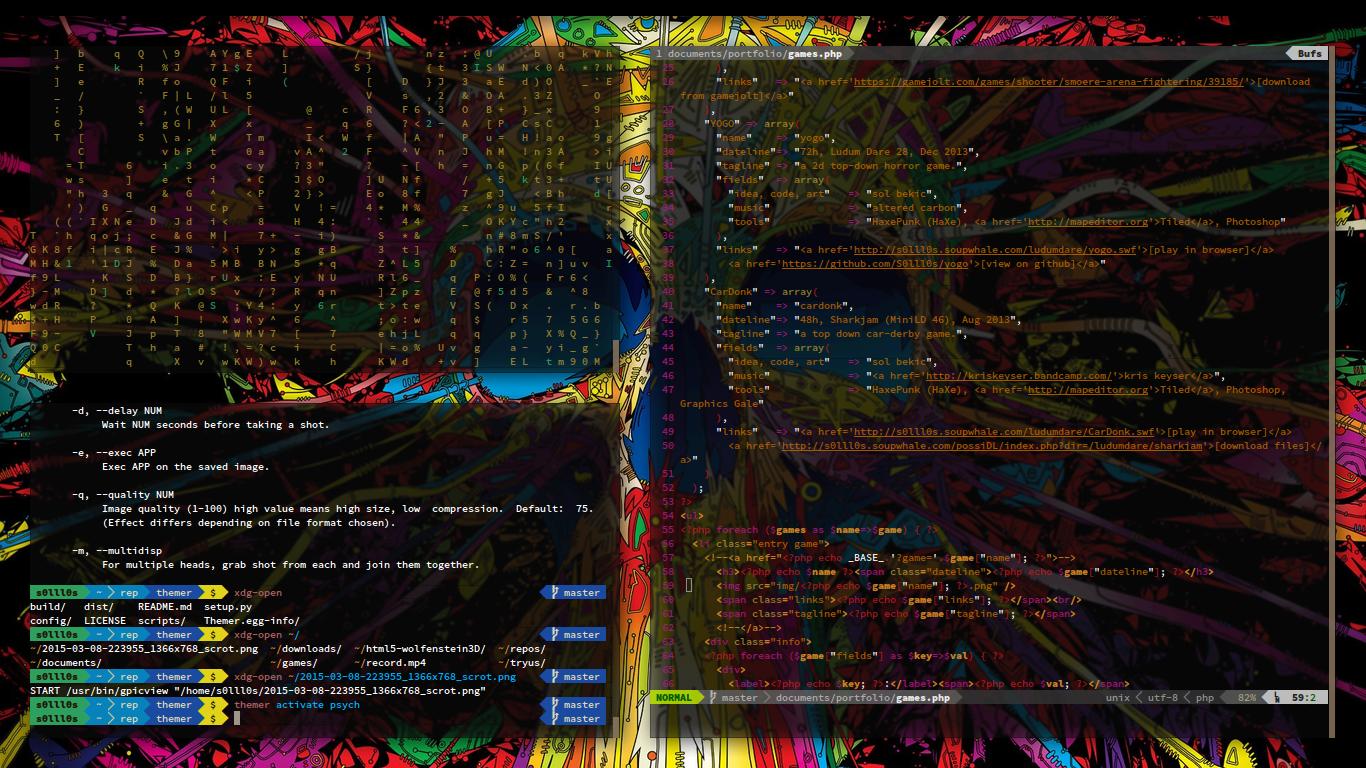 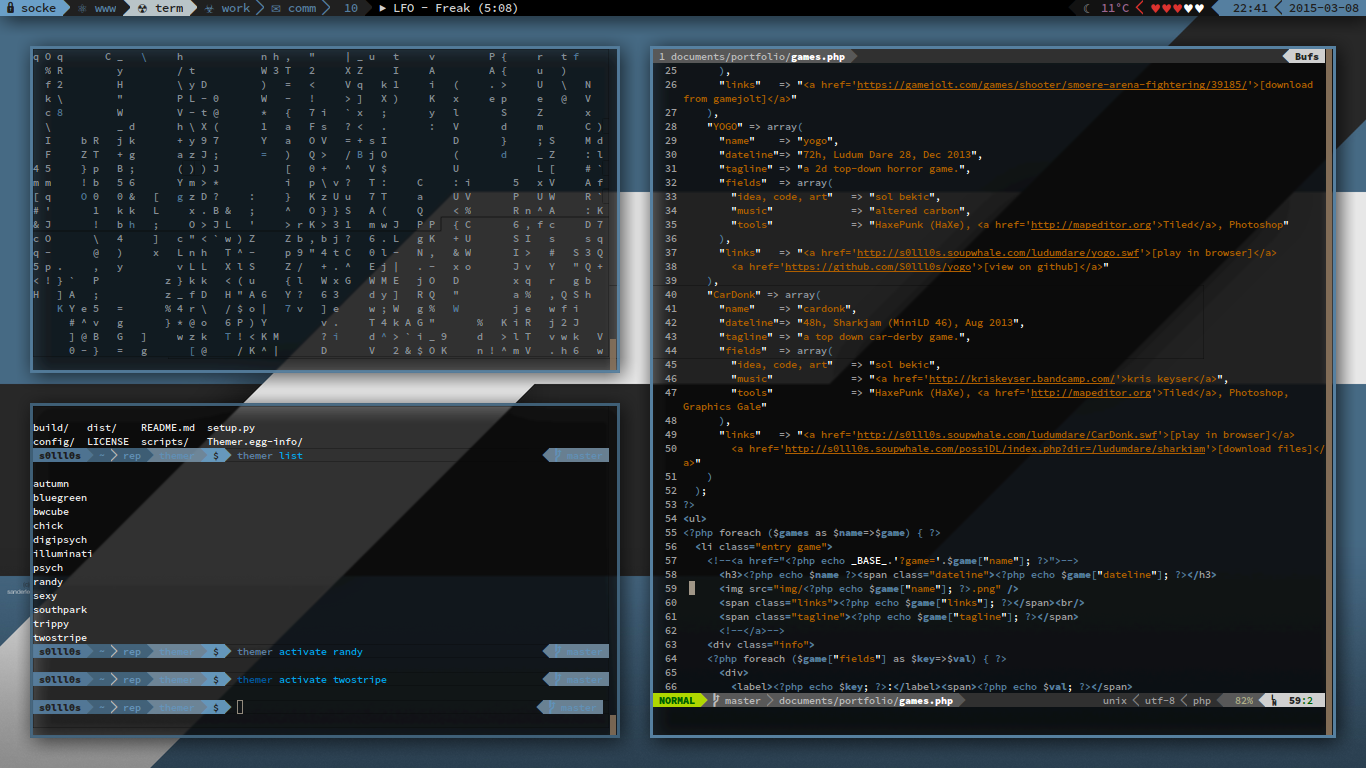 Plugins can be installed anywhere into your PYTHONPATH, but the plugins directory under the used template dir is automatically added to sys.path, so you may want to place them there (usually this is ~/.config/themer/templates/i3/plugins). They are loaded via their python module-an-classname string; e.g. mymodule.activator.MyActivator. Plugins are configured on a template-directory basis, in the config.yaml file (default ~/.config/themer/templates/i3/config.yaml).

Activators are run once every time a theme is activated. Use them to reload configuration files, set desktop wallpapers etc.

Each Activator should implement the method activate. The constructor is passed the values for theme_name, theme_dir and logger. All of these and colors can be accessed via the instance's properties.

Parsers are used to generate colorschemes from files and strings.

Each ColorParser should implement the method read, which should return the color dictionary generated from the input string in self.data (or obtained via the constructor's first argument). A ColorParser can additionally return a path to a wallpaper to be used by setting self.wallpaper to anything other than None.

Additionally, Parsers need to have a check attribute. It is used to determine whether a Parser should be used for a given color source. check can either be a function, in which case it is passed the color-source string and expected to return a truthy value if it wants to handle that color source, or a string. If it is a string it will be used as a regex and matched against the color source string.

The themer.check_file_regex helper can be used to build a check function that checks filenames against a regex and verifies their existence on the filesystem.

The constructor is passed the values for data, config and logger. All of these can be accessed via the instance's properties. The default constructor also sets self.colors to a new dictionary and self.wallpaper to None.

Themer is a colorscheme generator and manager for your desktop.