Neural Machine Translation (NMT) is a technique used in natural language processing, and refers to the use of neural networks, to translate one form of information into other.

Some common examples include language translation, speech to text and image captioning.

Most common neural network architectures used for machine translation are Recurrent Neural Networks (RNNs), and its variations including GRUs and LSTMs. This task falls under the sequence-to-sequence category, and traditionally, the go to model for such a task used to be encoder-decoder models. 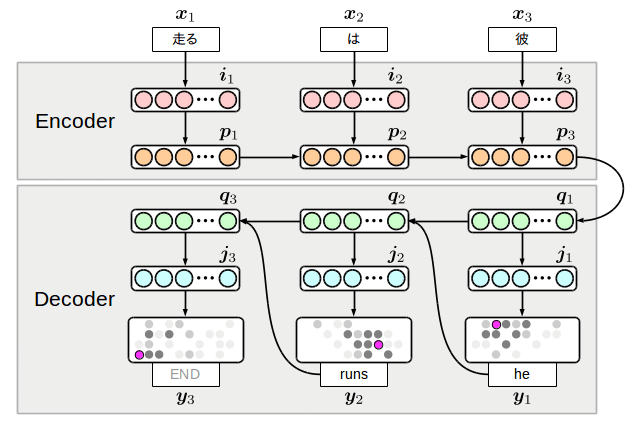 Encoder-decoder models consist of two parts, wherein the first part, i.e encoder, takes as input a sequence, which has to be translated and encodes the probability distribution of the input sequence, conditioned on the order of the sequence.

The second part (decoder), outputs this probability conditioned on its previous outputs. For example, in the picture above, the first two outputs of the decoder are :

When a big document is fed into an encoder-decoder, the encoder takes in the entire document before producing an output. But this is not the way a human would do it. For example, a translator would not learn an entire English novel, before translating it into French.

Humans do it much more efficiently by focusing only parts of sentences, to translate. This is the intuition behind attention models. Although even this framework takes in the entire body of document, it focuses only on parts of the document during translation. This results in much more accurate translations.

Attention models (due to Dzmitry Bahdanau, Kyunghyun Cho, Yoshua Bengio) work by stacking up one more layer of RNNs (LSTM/GRU) over the input layer, the so called "attention layer". The number of times this RNN is unrolled is equal to the number of output units (in this case, the number of words in the translated text). Each unit in this layer is connected to all the units of the input layer, and receives a "context" variable denoted by C. In the figure below, the input layer is a Bi-directional LSTM. Simple uni-directional LSTMs can also be used but to capture connections amongst words better, B-RNNs are recommended, but they come at an increased computational cost. 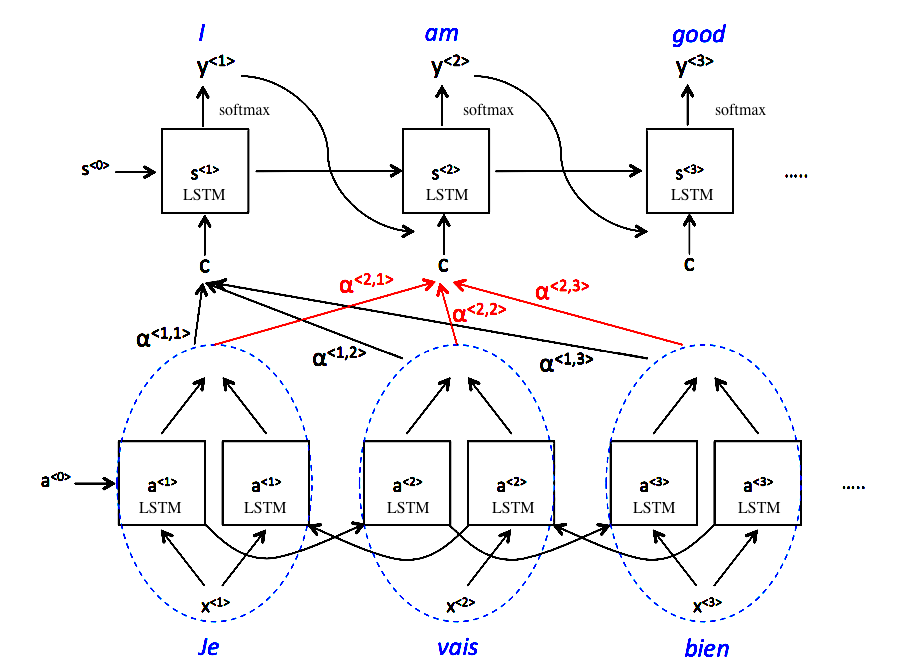 Context C receives input from all the nodes of the input layer, weighted by the matrix alpha. The alpha matrix captures the importance that the tth output should give to the t'th input. Formally,

Where Tx is the number of words in the input, and at' is a concatenation of the forward and backward activation vectors of the input layer.

Intuitively, the importance that the t-th output should give to the t'-th input should depend on the t'-th input and the activations of the nodes in the attention layer that came before the t-th output. Also, for each output t, we define the alphas to be between 0 and 1. Since each output t should get attended, we constrain the sum of alphas to be 1. Given this, the softmax function is a good candidate for defining alphas. But since we don't know what's the exact function that governs this dynamic, we can let it be learnt! Therefore, we can write :

Where the vectors e are some representations of the input nodes and previous hidden states of the attention layer. Since we don't know what these representations look like, we can let them be learnt by constructing a small feedforward neural network which takes as input the activations of the input layer and previous hidden state, and outputs the vectors e 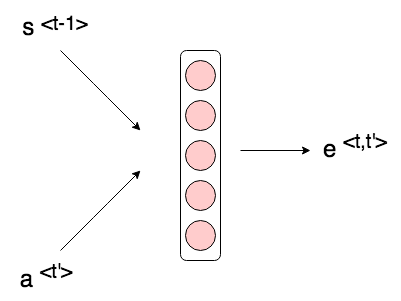 With this architecture, the network learns the alpha matrix, and learns to focus on the right words while translating.

I used the briefings of the Europian Parliament, which consists of more than 200,000 sentences in parallel text format with parallel texts for French and English. I preprocessed the text to :

GloVe stands for "Global Vectors for word representations" due to Jeffrey Pennington, Richard Socher, and Christopher D. Manning You cannot feed words directly into the neural network. Conventionally, words were one-hot encoded according to their position in the english dictionary. But this fails to capture inter-word dependence, because the dot product of any two one-hot-encoded word vectors is always zero.

A program trained on one-hot-encoded word vectors cannot infer analogies like the following :

Check out references to know how these vectors are constructed.

The architecture I used for this task consisted the following :

Summary of the network:

Note: I had never hoped to achieve good results with such a shallow model. State of the art NMT networks are much deeper and maybe have thousand times more parameters, to accommodate the entire spectrum of words in both the languages. Nonetheless, I tried. I give below some good attempts of my little network to translate english to french.

As is evident, there are a lot of "de". There were also a lot of "je" and "il". Its not surprising because these are just extremely common words in french.