densh released this · 455 commits to master since this release

On all of our throughput benchmarks Immix performs much better than Boehm: 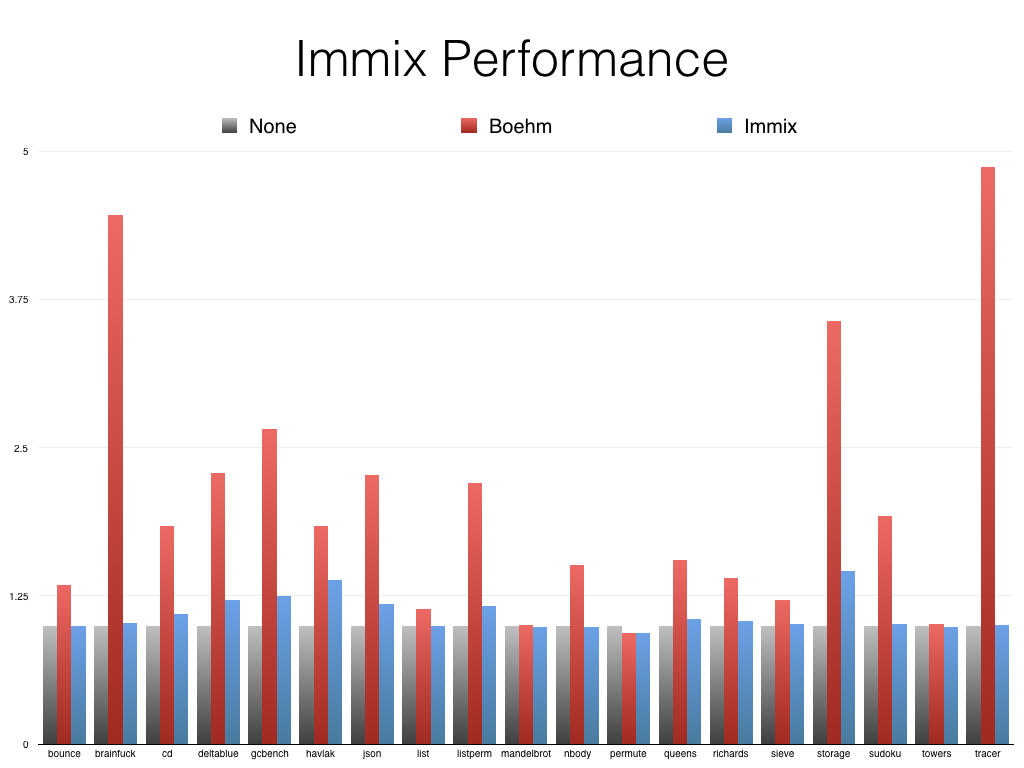 Here you see running time of our benchmarks (less is better), normalized by the running time with garbage collector turned off. Average GC overhead went down from 100% to 10% with some benchmarks seeing close to 5x improvements.

Immix can enabled in opt-in fashion by adding the following setting in your sbt build:

Boehm remains as the default garbage collector until our immix implementation matures.

We extend our sbt integration to support sbt test frameworks. This means that starting with 0.3, as soon as a testing framework an all of its dependencies are published for the Scala Native platform, one can use them to compile and run Native-compiled test suites.

sbt-crossproject is a an sbt plugin that automates cross-compilation and cross-publishing across the three major Scala platforms: JVM, JS and Native. We are happy to announce it's second release: 0.2.0. This release is feature complete with the respect to the original cross projects from Scala.js 0.6.x. New-style cross projects are now used on the master branch of Scala.js (to be released as part of the upcoming 1.0 release.)

#339 Add support for sbt testing interface (by @Duhemm)
#652 Add new sbt new template (by @MasseGuillaume and @densh)
#686 Implements selector-based row displacement for trait method dispatch, decreasing the size of the generated binaries by up to a factor 5x in some cases (by @densh)
#833 Make sure zlib, re2 and boehm dependencies are truly optional (by @densh)

#128 New garbage collector: Immix (by @LukasKellenberger and @densh)
#596 System nanotime test sometimes fails (by @muxanick)
#667 Make sure linker doesn't under-approximate in cases of complex trait inheritance (by @densh)
#679 Names in LLVM IR must escape quote character (by @muxanick)
#695 Fix handling of this in loops generated by tailrec (by @densh)
#760 java.io.FileDescriptor.valid should check that file descriptors are actually valid (by @Duhemm)
#762 Compiler tries to box short into int (by @densh)
#765 java.io.FileInputStream constructor should throw java.io.FileNotFoundException on invalid file names (by @mccartney)
#770 FileWriter ignores -1 result from open (by @mccartney)
#794 Signature of java.util.Arrays.asList is wrong (by @hwielenberg)
#799 Up to 15x faster java.io.BufferedReader.readLine (by @densh)
#803 String concat must always convert null arguments to "null" string (by @densh)
#809 Scala hash code must return 0 on null values (by @densh)
#819 Fix the resource leak of java.io.InputStreamReader.close (by @matil019)
#820 java.io.FileInputStream.available should throw java.io.IOException after closed (by @matil019)
#822 Fix the resource leak of java.io.BufferedReader.close (by @matil019)