Scaled focuses on the text editing experience first, and IDE-like features second. This does not mean that the IDE features suck (indeed, a goal of Scaled is to push the frontiers of "intelligent" code editing), but rather that they are not "in your face" from a user experience standpoint. We start from the pristine calm of a colorized window of code, and tastefully grow from there.

Scaled is designed to be extensible in any JVM language. This is technically possible already, but will be substantially improved before I claim that anyone would actually want to do this. My goal is that a programmer using Scaled can comfortably extend the editor in their preferred JVM language with no more cognitive dissonance than they already endure when using a third party library written in Java. I may never reach perfection in that regard, but it will be a damned sight better than extending the editor in elisp (nothing against lisp, use Clojure if that's your bag). 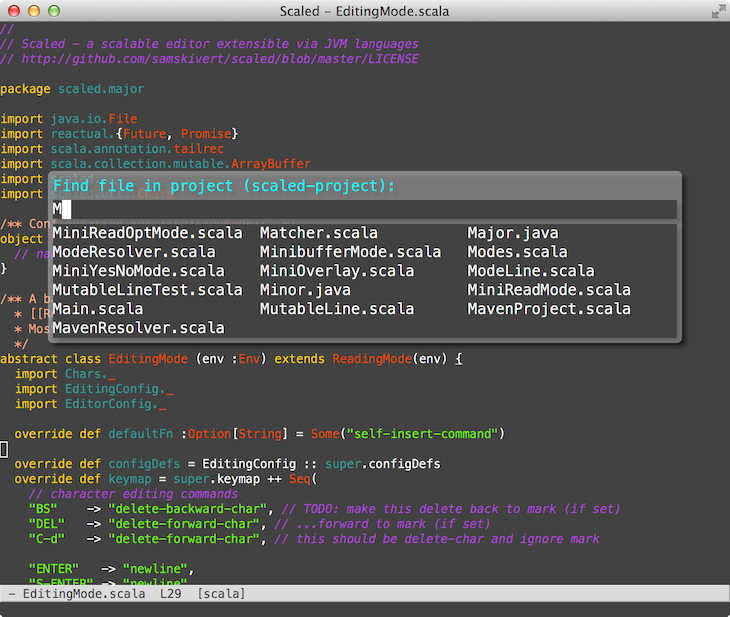 A Scaled Google Group exists where questions, comments, suggestions and discussion of anything else related to Scaled or programmer's editors are welcome.

Scaled is in daily active use by its author (for four years now). It is mature enough that I use it exclusively to develop itself and various other projects. It has some rough edges, and essentially zero user community, so it's only likely interesting to someone who wants to be able to deeply and easily customize their editor without having to write JavaScript or elisp.

If that hasn't scared you off, here's how to give it a whirl:

Scaled includes a package management system which is used to install Scaled itself as well as extension packages. The Scaled package manager (spam) is desgined to bootstrap itself from a single jar file which you can install in conjunction with a shell script or batch file.

Note: Cygwin users can't use dirname $0 so they'll have to replace that with the absolute path to scaled-pacman.jar.

Note: if you're using OpenJDK on Linux, you need to be sure that you've also installed the OpenJFX package as Scaled uses JavaFX for its UI.

Use spam to install Scaled

Now that spam is installed, you can test that it's working by running:

and you should see this output:

Assuming you do, then you're ready to install Scaled. Do that like so:

This will download and build all of the core packages that make up Scaled. Scaled packages are fetched directly from their DVCS source URLs and built locally during the installation process. Depending on the pre-existing state of your local Maven repository, this may involve downloading a bunch of existing jars, and it will involve compiling a bunch of code. It might take a minute or two on a reasonably speedy development machine.

Scaled will install itself into ~/.scaled on a non-Mac, and ~/Library/Application Support/Scaled on a Mac. Let's call that directory SCALED_HOME. You can invoke Scaled via spam, but it's cumbersome, instead symlink SCALED_HOME/Packages/scaled/bin/scaled into your ~/bin directory (or wherever you like to put things so that they are on your shell path), and then invoke Scaled via scaled.

Windows users can link (or copy) SCALED_HOME\Packages\scaled\bin\scaled.bat somewhere such that it's on their path.

By default, Scaled comes only with basic text editing capabilities. To properly Feel the Magic™, you will need to install some packages. You can list the available packages via:

If you are a Java developer, you'll probably want to:

There is very rudimentary Gradle integration via gradle-project but keep your expectations low.

Scaled also has LSP integration. If you have Eclipse metadata in your project, the Eclipse language server will be started automatically.

Scaled also includes basic integration with JUnit, allowing you to run tests directly from within the editor and see results. C-c C-t C-a runs all the tests for the project and there are other bindings to run just the tests in the current file, just the test function under the point, or to re-run the last executed test.

This includes basic integration with the Flow type checker.

At the moment Scaled's "UI" follows Emacs where that makes sense (pretty much all of the basic editing key bindings). Extensions like project-mode introduce new interactions and I'm not making an effort to model those on the myriad hodge-podge Emacs IDE-like extensions that exist, I'm just trying to come up with sensible bindings.

At any time, you can invoke M-x describe-mode (or C-h m) to see all of the key bindings and config vars for the the active major and minor modes. You can cross-reference that with the Emacs reference card to see basic editing commands organized more usefully than alphabetic order.

Chances are, Scaled does not currently solve all of your development needs and make your favorite kind of toast. If you find that the fires in your belly are stoked by the idea of an Emacs-like extensible editor built atop the JVM, then perhaps you would like to extend Scaled such that it does support your desired toast-making capabilities. This is becoming a less crazy prospect day by day as the Scaled core stabilizes and the facilities for developing Scaled improve.

Because Scaled checks itself and all of its extensions out directly from source, you can simply start hacking on the code that is checked out in SCALED_HOME/Packages. This is not wildly different than how I develop Scaled. I actually have the packages checked out elsewhere and symlink them into SCALED_HOME/Packages, but that's mainly so that I can arrange the numerous Scaled subprojects into a slightly less flat directory structure.

I'll eventually add support to the Scaled Package Manager to make it easier to maintain a "working" Scaled installation in the standard location and a "development" Scaled installation elsewhere which you hack on, run when testing, and can break without fear of hosing your development setup. That's even theoretically possible right now by running spam -Dscaled.meta=somedir (or scaled -Dscaled.meta=somedir as -D args are passed through to spam) but I'd like to make it even easier.

There's not much documentation on Scaled's internals yet, but if more than zero people turn up and want to help, then I'll gladly move the writing of said documentation up my priority list. The main ways to extend scaled are described below.

An example of all of these flavors working in harmony is the project-service package which provides a framework for grokking projects. Project support comes in three parts:

Scaled is released under the New BSD License. The most recent version of the code is available at https://github.com/scaled/scaled