This is a work in progress DIY split-flap display. Prototype four-character display: video. The goal is to make a low-cost display that's easy to fabricate at home in small/single quantities (e.g. custom materials can be ordered from Ponoko or similar, and other hardware is generally available).

You can view an interactive 3d model of the design on the project website.

New: Join the community Slack group to discuss or ask questions about the project! (It's new so it may be a bit quiet, but don't be shy!)

This design is currently nearly stable. The source files provided here have been used to produce multiple working prototypes, but may still have some minor issues and/or incomplete documentation.

You can download the latest stable release from the official 'releases' page.

Important: these files have been auto-generated from the latest commit on the master branch, and may contain changes that are untested or outright broken. Use at your own risk.

If you are interested in building a display without digging into the design details, I recommend using one of the stable releases instead. 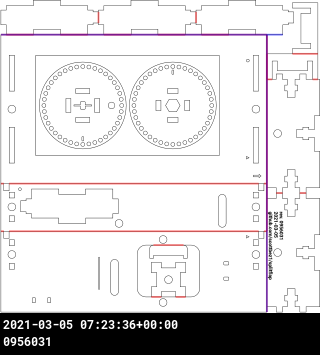 This design is still a work in progress; a build log/instructions for building a prototype split-flap display of your own is posted in the wiki.

This is an incomplete list of supplies needed to build a split-flap display module, to get a rough sense of the overall cost, as of May 2018.

There are two options for flaps: hand-cut and die-cut.

Each card needs to be cut in half and then have two pieces punched out of either side. Each display unit requires 40 flaps, or 20 cards per unit. 100 cards is enough for 5 units in theory, but 4 in practice because there are no spares for mistakes.

These professional die-cut flaps are pre-cut with the exact dimensions needed for this project (no manual cutting/punching required) and come in both white and matte black. Proceeds help support continued development and prototyping.

Circuit boards are available either in small quantities from Tindie, or in bulk from PCB manufacturers such as SeeedStudio.

You can find a more detailed breakout of electronics' bill of materials (BOM) in the ordering instructions.

The main design file is 3d/splitflap.scad

You'll need a recent version of OpenSCAD (e.g. 2015-03), which may need to be installed through the PPA: sudo add-apt-repository ppa:openscad/releases

In general, solid objects such as the enclosure sides or spool components are built from 2d primitives and then extruded to the appropriate thickness for 3d rendering, rather than using 3d primitives. This simplifies the design without losing expressiveness; the perpendicular laser cut beam doesn't allow for cuts that vary in the Z dimension anyway.

Note that while the design is parameterized and many values may be tweaked, there is currently no error checking for invalid parameters or combinations of parameters. Please take care to validate the design if you change any parameters. For instance, while most of the design will adjust to a changed num_modules value, certain values may cause some elements to intersect with other elements or protrude beyond their expected dimensions.

The design can be rendered to 2d for laser cutting by running 3d/scripts/generate_2d.py [--panelize <number>], which outputs to 3d/build/laser_parts/combined.svg. The optional --panelize argument allows for rendering a panel of modules in a single SVG, for bulk laser-cutting.

Internally, the design uses a projection_renderer module (3d/projection_renderer.scad), which takes a list of child elements to render, and depending on the render_index renders a single child at a time. It also adds material to each shape to account for the kerf that will be cut away by the laser.

The generate_2d.py script interacts with the projection_renderer module by first using it to determine the number of subcomponents to render, then runs OpenSCAD to export each component to an SVG file. It does some post-processing on the SVG output (notably adds "mm" to the document dimensions), and then combines all components into the single combined.svg output.

Once the combined.svg file is generated, you'll want to double-check there aren't any redundant cut lines that are shared by multiple adjacent pieces, to save time/cost when cutting. They should be detected automatically (and highlighted in red in the rendering above), but it doesn't hurt to double-check. In Inkscape, select the "Edit paths by nodes" tool and select an edge to delete - the endpoints should turn blue. Then click "Delete segment between two non-endpoint nodes", and repeat this for all other redundant cut lines.

The design can be rendered to a rotating 3d animated gif (seen above) by running 3d/scripts/generate_gif.py, which outputs to 3d/build/animation/animation.gif

The generate_gif.py script runs multiple OpenSCAD instances in parallel to render the design from 360 degrees to individual png frames, which are then combined into the final gif animation. As part of building the animation, generate_gif.py renders the design with multiple configurations (opaque enclosure, see-through enclosure, no-enclosure and no flaps) by setting the render_enclosure and render_flaps variables.

The design can be rendered to a series of STL files (one per color used in the model) in order to be displayed in an interactive web-based 3d viewer. Similar to the projection_renderer used to render individual components for laser-cutting, the ColoredStlExporter detects all the colors used in the model and renders them one-by-one to separate STL files, along with a manifest that maps each STL file to its RGB color. The STL files and manifest are loaded using three.js to display an interactive model on a web site using WebGL. See this blog post for more details on how the export and three.js renderer work: OpenSCAD Rendering Tricks, Part 3: Web viewer.

The driver board is designed to plug into an Arduino like a shield, and can control 4 stepper motors. Up to 3 driver boards can be chained together, for up to 12 modules controlled by a single Arduino. The designs for the controller can be found under electronics/splitflap.pro (KiCad 4 project). Nearly everything is a through-hole component rather than SMD, so it's very easy to hand-solder.

The driver uses 2 MIC5842 low-side shift-register drivers, with built-in transient-suppression diodes, to control the motors, and a 74HC165 shift register to read from 4 hall-effect magnetic home position sensors. There are optional WS2812B RGB LEDs which can be used to indicate the status of each of the 4 channels. 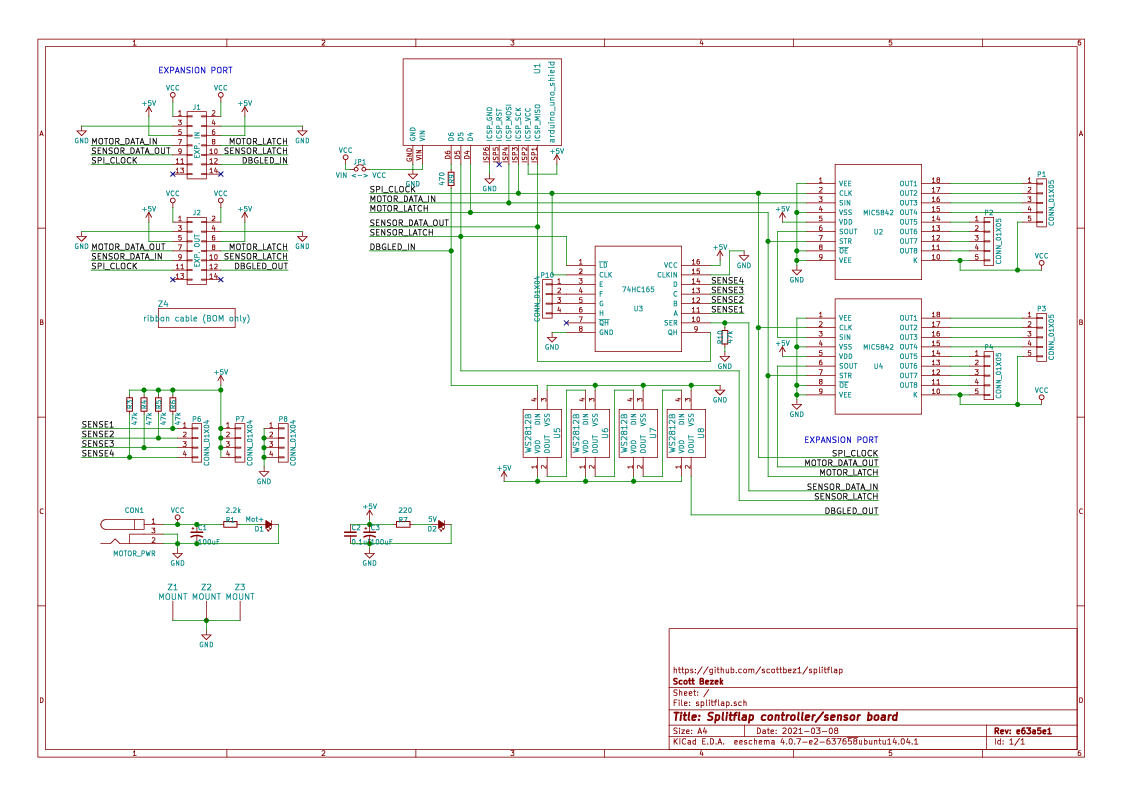 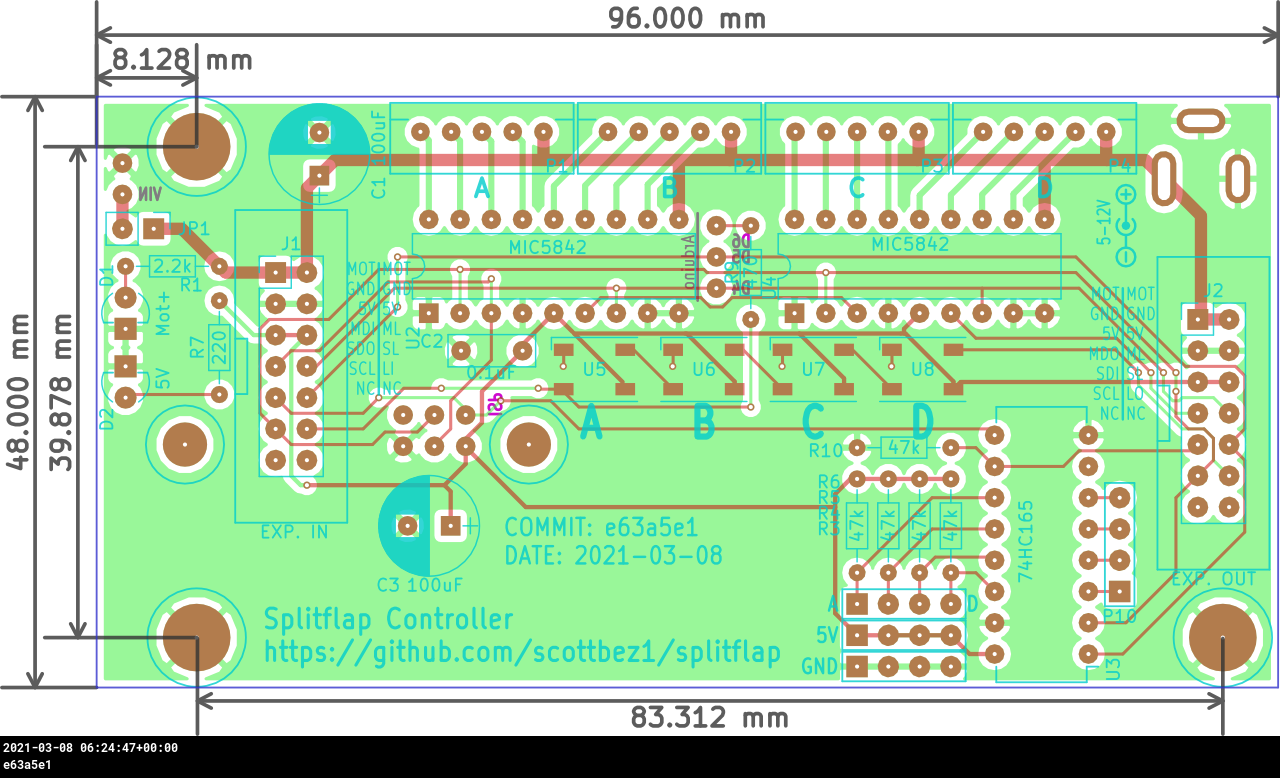 Each module also needs a hall-effect sensor board, with an AH3391Q (or similar) sensor and connector. These boards are small (about 16mm x 16 mm) and are available on a second PCB design that's panelized. The panelization is configurable (see generate_panelize_config.py) and is optimized for production at SeeedStudio. 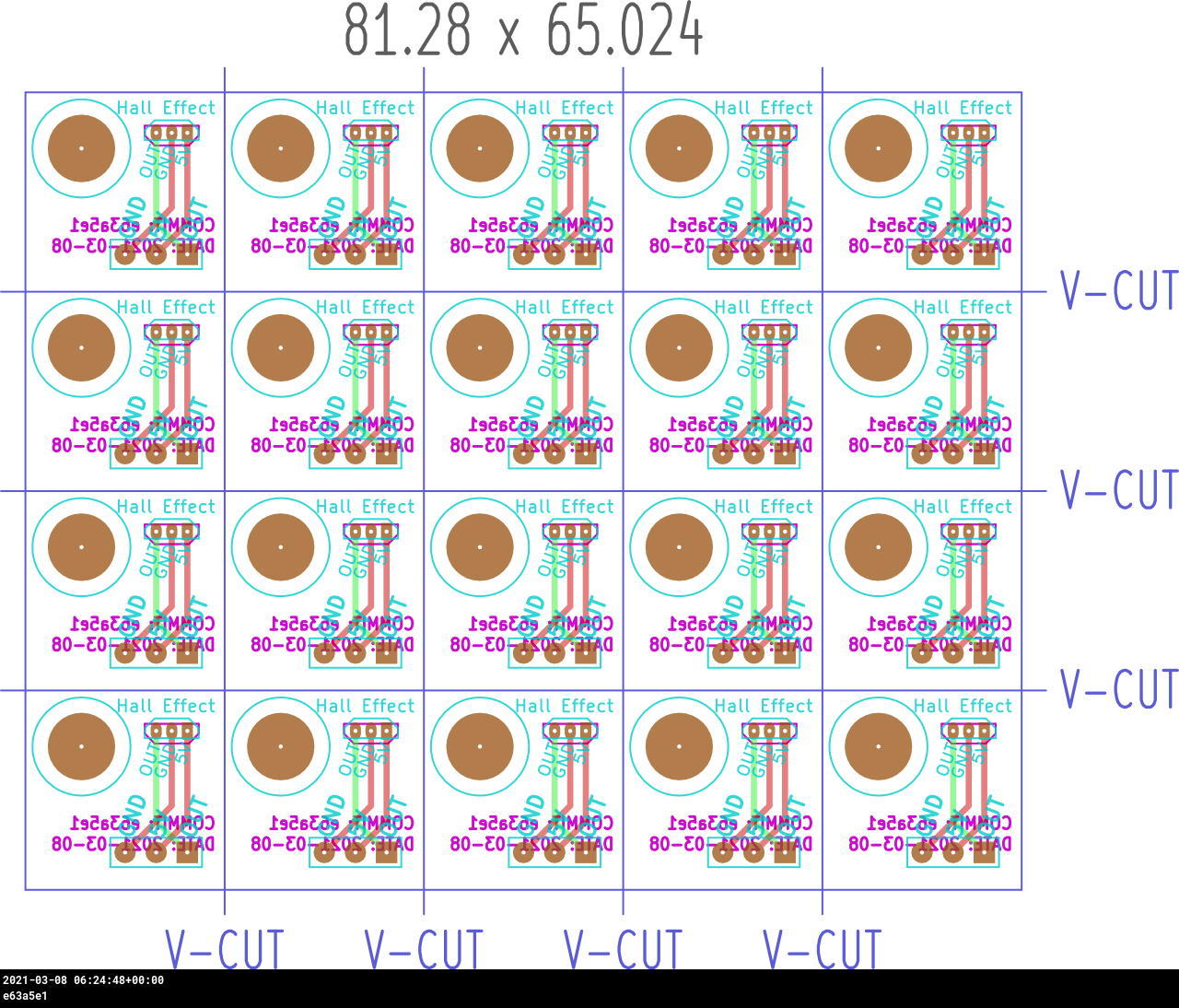 These are automatically updated on every commit with the latest rendering from the master branch. See this blog post for more details on how that works: Automated KiCad, OpenSCAD rendering using Travis CI.

The PCB layout can be rendered to an svg or png (seen above) by running electronics/scripts/generate_svg.py file.kicad_pcb. This uses KiCad's Python scripting API to render several layers to individual svg files, manipulates them to apply color and opacity settings, and then merges them to a single svg. For additional details, see this blog post: Scripting KiCad Pcbnew exports.

For reviewing the design, a pdf packet with copper, silkscreen, and drill info can be produced by running electronics/scripts/generate_pdf.py file.kicad_pcb.

Gerber files for fabrication can be exported by running electronics/scripts/generate_gerber.py file.kicad_pcb. This generates gerber files and an Excellon drill file with Seeed Studio's naming conventions and produces a .zip which can be sent for fabrication.

EESchema isn't easily scriptable, so to export the schematic and bill of materials electronics/scripts/export_schematic.py and export_bom.py start an X Virtual Frame Buffer (Xvfb) and open the eeschema GUI within that virtual display, and then send a series of hardcoded key presses via xdotool to interact with the GUI and click through the dialogs. This is very fragile but seems to work ok for now. For additional details, see this blog post: Using UI automation to export KiCad schematics.

The firmware currently runs a basic closed-loop controller that accepts letters over USB serial and drives the stepper motors using a precomputed acceleration ramp for smooth control. The firmware automatically calibrates the spool position at startup, using the hall-effect magnetic sensor, and will automatically recalibrate itself if it ever detects that the spool position has gotten out of sync. If a commanded rotation is expected to bring the spool past the "home" position, it will confirm that the sensor is triggered neither too early nor too late; otherwise it will search for the "home" position to get in sync before continuing to the desired letter.

The display can be controlled by a computer connected to the Arduino over USB serial. A basic python library for interfacing with the Arduino and a demo application that displays random words can be found in the software directory.

When the Arduino starts up, it sends an initialization message that looks like:

The display will automatically calibrate all modules, and when complete it will send a status update message:

(Note: this is sent as a single line, but has been reformatted for readability above)

In this case the Arduino was programmed to support 4 modules, but only 1 module is connected, so the other 3 end up in "sensor_error" state. More on status updates below.

At this point you can command the display to show some letters. To do this, send a message to the Arduino that looks like this:

The = indicates a movement command, followed by any number of letters, followed by a newline. You don't have to send the exact number of modules - if you send fewer letters than modules, only the first N modules will be updated and the remainder won't move. For instance, you could send =a\n as shorthand to only set the first module (even if there are 12 modules connected). Any letters that can't be displayed are considered a no-op for that module.

Whenever ALL modules come to a stop, the Arduino will send a status update message (just like the one following initialization, shown above). Here's what the fields mean in each module's status entry:

If you want to make all modules recalibrate their home position, send a single @ symbol (no newline follows):

This recalibrates all modules, including any that were in the sensor_error state; if recalibration succeeds they will return to the normal state and start responding to movement commands again.

The vast majority of this project is licensed under Apache v2 (see LICENSE.txt for full details).