A universal (iPhone/iPad) storyboard project that illustrates the ad-hoc networking features of MCSession. The app advertises itself to nearby iOS devices via Wi-Fi or Bluetooth and automatically connects to available peers, establishing a peer-to-peer network. 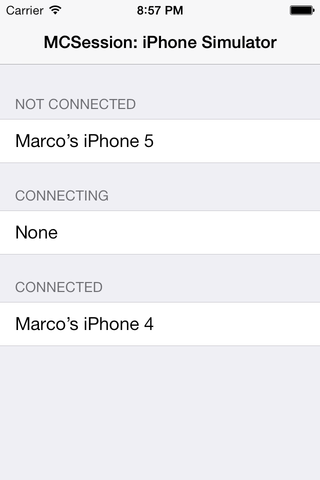 You'll need to run at least two instances of the app to set up a P2P network. Build the application using Xcode and run it on a device or the simulator. Wait for another application instance to join the network. Devices / simulators must be on the same network or within Bluetooth range to see each other. Connected peers will appear in the peer list.

Please note: Bluetooth networking is not supported in Simulator.

The source code is available under the Apache License, Version 2.0

Forks, patches and other feedback are always welcome.