I'm planning to buy my first house soon. Since I'm not yet invested in real estate, I've been looking for the right time to enter the market. I know that trying to time the market is a fool's game, but I am that fool.

The most relevant data I've been able to locate is the S&P/Case-Shiller Home Price Indices. It is calculated by comparing the selling price of homes in a given metro area in a given month against previous selling prices for the same property. There are lots of other numbers you could track (housing starts, current inventory levels, asking prices, etc.), but this is where the rubber meets the road. It reflects what prices homes are actually fetching in a given area at a given time. 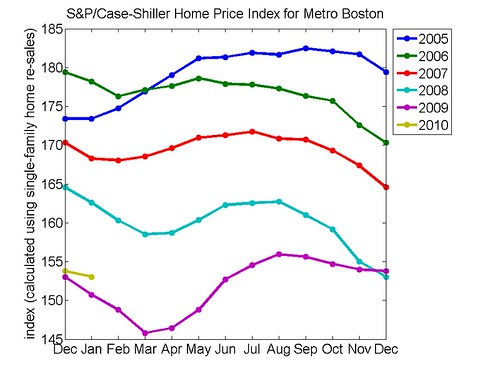 Home prices have a natural seasonality in Boston, rising in the spring and falling in the fall, so I've been focusing on year-on-year changes. I designed this plot to make it easy to compare this change. Each year is a line. If you cut the plot out of the page and glued the left to the right edge, the cylinder would be a continuous line changing color at the start of each year.

The most interesting events for me are when the lines cross. They represent points in time where house prices are the same from one year to the next. That happened in Boston in April 2006, as the market began to cool. For nearly four years after that, the average home in Boston was worth less than it was a year before. This free fall came to an end in December 2009, when finally the lines crossed again and the market held its value.

January's numbers came in today and again the year-on-year values are in the black. The index is down compared to December, though. We're not out of the woods yet, but we may be at the beginning of the recovery.