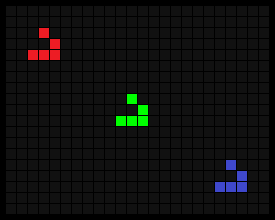 The Game of Life was invented by John Conway (as you might have gathered). The game is played on a field of cells, each of which has eight neighbors (adjacent cells). A cell is either occupied (by an organism) or not. The rules for deriving a generation from the previous one are these:

If an occupied cell has two or three neighbors, the organism survives to the next generation.

If an unoccupied cell has three occupied neighbors, it becomes occupied.

Where You Can Find More

The original article describing the game can be found in the April 1970 issue of Scientific American, page 120.

A PostScript implementation, of all things. Very cool!