Jaydio is a Java library for giving the programmer finer control over file I/O, in part by bypassing the OS buffer cache. For now, only Linux is supported. Jaydio serves as as a starting point for asynchronous / non-blocking direct I/O, custom file page caching layers, and even advanced cache replacement policies like ARC or 2Q. Currently, it is useful for preventing the operating system from evicting memory pages which need to stay "warm" in favor of non-critical file pages.

Adding Jaydio to Your Project

Jaydio has dependencies on JNA and log4j.

If you use Maven, you can add the following to your pom.xml:

Alternatively, if you don't want to deal with Maven or with tracking down dependencies manually, the following are also available:

jaydio-0.1-jar-with-dependencies.jar.asc (if you want to verify the jar against my gpg public key)

The API reference for Jaydio is located in the javadoc.

Jaydio works by passing the O_DIRECT flag to the Linux open() system call. Unfortunately, talking directly to disk imposes some nasty rules about how many bytes can be written at a time, and where they can be written. In particular, all writes must be in multiples of the file system block size, and they must originate from chunks of memory aligned to the memory page size, and they must also occur at file system block boundaries. see man 2 open (search for O_DIRECT) and man 3 posix_memalign for more details.

Fortunately, with Jaydio you don't have to worry about any of that. All of the nasty alignment rule parameters are determined on-the-fly, so that native libc file reads and writes may be used to bypass the OS cache. Jaydio uses JNA to accomplish all this parameter querying and other native magic.

Here is a plot of memory use on my system during a copy of a 1.4 GB file, under different scenarios. The first scenario (red) corresponds to having plenty of memory free (about 2.6 GB) at the start of the copy, so that, if need be, we could basically fit two copies of file in memory. The second scenario (blue), my system has limited memory available (about 900 MB) when copying begins. The third scenario (green), we use Jaydio for the file copy (yay!), with buffers totaling about 36 MiB. For each scenario, completion of the copy is indicated by a vertical dotted line. 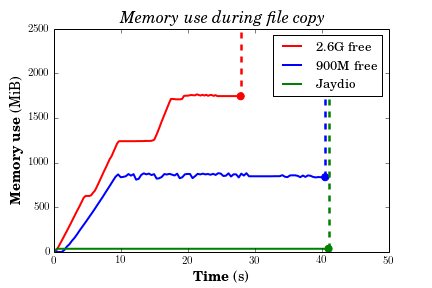 As you can see, Jaydio successfully bypasses the OS buffer cache, and uses no memory other than the small buffers allocated to it. Interestingly enough, for scenario 2 (blue, RAM limited), we're only taking marginally less time than direct I/O for the copy! This is likely because we ran out of RAM early on, and so are effecively doing direct I/O at the point where the blue curve flatlines, as we need to free up space in the cache whenever we do a write.

Why bypass file system cache? Isn't it there for a reason?

Yes, and in 99% of cases you will want to use it. As mentioned earlier, Jaydio serves as a starting point for implementing more advanced cache replacement policies than LRU, but there are also times when you want to prevent the operating system from evicting certain memory pages in favor of caching files.

Can't I just use something like DONTNEED or NOREUSE with posix_fadvise or madvise if I'm worried about that page cache stomping over useful memory pages?

As far as I know, NOREUSE is a no-op.

You could use DONTNEED, and you would likely see better performance (in terms of raw speed), too. Unfortunately, this sort of strategy does not discriminate between cached pages that you want to save and those that you want to write back to disk, if, say, the same file has been opened by multiple threads, of differing priorities regarding memory accesses. Here is one example of a situation where this sort of strategy will not work.

I'm on Linux, but when I try to create a Jaydio DirectRandomAccessFile I get "Error opening file, got Invalid argument". What gives?

This is the very uninformative libc error that you get when something goes wrong when opening a file. Chances are that your file system does not support opening files with the O_DIRECT flag. For example, if you encrypt your home directory using a file system like ecryptfs, you can't use direct I/O there.

Any contribution, whether it be a bug report or new core functionality, is welcome. Please feel free to fork and send pull requests! That being said, contributions which include unit tests are preferred.

Once you have cloned the source, one of the easier ways to get set up is with eclipse, especially if you have the m2eclipse plugin. Just go to "File -> New -> Project -> Maven Project" and point the root directory to wherever you cloned Jaydio.

If you don't have m2eclipse, you can still set things up easily if you run mvn eclipse:eclipse wherever you cloned Jaydio to set up .project and .classpath files for eclipse. From eclipse, then do "File -> New -> Java Project" and point the root project directory to the Jaydio directory.

Lastly, if you find some use for Jaydio, one excellent way to contribute is to shoot me an email describing what you're doing -- I'd love to hear about it!

This library is released under the Apache Software License, version 2.0.