Given an input board the AI player predicts the probability of finding a mine at each open location. It selects the lowest probability location for its next guess. This process repeats until until the game is over.

The first move is always safe in minesweeper so the AI chooses at random to remove bias derived from player initialisation.

This is a suboptimal strategy since a higher risk guess may reveal more information, improving the chance of winning that game.

In practice however the strategy used appears to work reasonably well.

A reinforcement learning approach could learn to make this tradeoff optimally. For example, weighting the backpropagation signal according by inverse game length.

Uses a neural net (NN) to predict where mines are going to be. The AI player chooses the lowest probability location for its next guess.

The NN consists of 4 fully connected layers whose sizes are dynamic depending on the game dimensions. A logistic loss function is used.

Trains on all saved training data.

Wins 80% of games (after several days training on CPU). 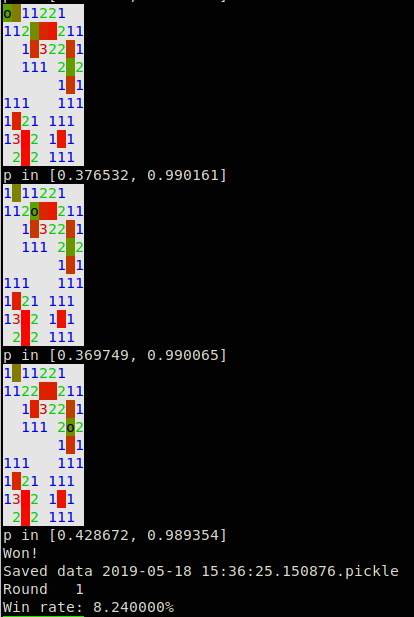