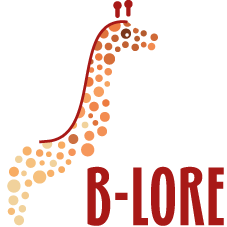 B-LORE is a command line tool that creates summary statistics from multiple logistic regression on GWAS data, and combines the summary statistics from multiple studies in a meta-analysis. It can also incorporate functional information about the SNPs from other external sources. Several genetic regions, or loci are preselected for analysis with B-LORE.

B-LORE is written in python and C++. To run B-LORE, you will need

To use B-LORE, you have to download the repository and compile the C++ shared libraries:

The Makefile uses g++ by default, which you can change depending on the compiler available on your system.

For calculating summary statistics, it uses the following file formats as input:

For meta-analysis, it uses the following input:

An executable file to run B-LORE is provided as bin/blore. This can used as follows:

There are 2 commands for B-LORE:

Each of these 2 commands takes different options, as described below.

View commands.sh in your favorite editor to see the commands, and execute ./commands.sh to run B-LORE on the 3 populations to generate summary statistics, followed by a meta-analysis.