Linux Steam* Integration is a helper system to make the Steam Client and Steam games run better on Linux. In a nutshell, LSI automatically applies various workarounds to get games working, and fixes long standing bugs in both games and the client. 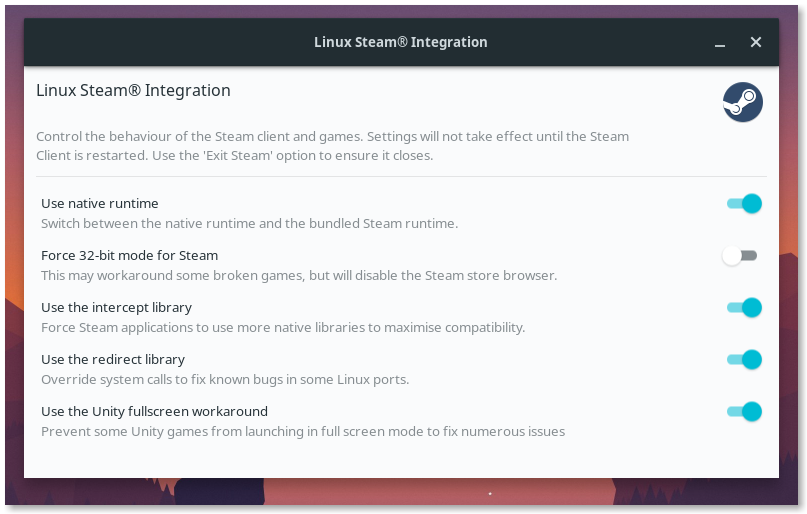 In many cases this will involve controlling which libraries are allowed to be used at any given time, and these libraries may be overriden for any of the following reasons:

This project, and by extension Solus, is not officially endorsed by, or affiliated with, Steam, or its parent company, Valve*.

With LSI, you don't need to worry any more about manually mangling your Steam installation just to make the open source drivers work, or manually creating links and installing unsupported libraries. LSI is designed to take care of all of this for you.

Many library names are redirected through the main "intercept" module, which ensures games will (where appropriate) use the updated system libraries. Additionally the module can override how games and the Steam client are allowed to make use of vendored libraries. This will help with many launch failures involving outdated libraries, or indeed the infamous libstdc++.so.6 vendoring which breaks open source graphics drivers on systems compiled with the new GCC C++ ABI.

Apply path based hotfixes to games

The redirect module contains some profiles to allow us to dynamically fix some issues that would otherwise require new builds of the games to see those issues resolved.

Older builds of Unity3D had (long since fixed) issues with launching to a black screen when defaulting to full screen mode. This is commonly addressed by launching the games with -screen-fullscreen 0, and is due to an invalid internal condition clamping the renderer size to 0x0 after setting the fullscreen (borderless) window size.

Note - updating these games to newer versions of Unity will fix this bug on Linux, however LSI currently ships a workaround. This workaround will abstract access to the configuration file in $XDG_CONFIG_HOME/.config/unity3d/*/prefs through the Linux /dev/shm system, and will provide initial game configuration whilst also masking the harmful fullscreen setting.

Net result - all Unity3D games using this pref path (the older generation) will start in windowed mode always. They can be fullscreened from inside the game, and this will help with making sure games actually launch.

Note that LSI will not modify your Steam installation, and instead makes use of two modules, liblsi-redirect.so and liblsi-intercept.so, to dynamically apply all of the workarounds at runtime, which in turn is set up by the main LSI shim binary.

For a more in depth view of what LSI is, and how to integrate it into your distribution, please check the technical README document.

Be advised that we intend to remove the need for distributions to integrate LSI in the near future, by providing the LSI system as a snap package for all supported distributions.

LSI may not yet be available for your distribution, however some community maintained repositories do exist.

LSI is currently undergoing work to become a universal package for all Linux distributions!

linux-steam-integration is available under the terms of the LGPL-2.1 license.

* Some names may be claimed as the property of others.