The terrain is generated at the beginning of the demo as a 1024x256x1024 sized perlin noise volume data in CUDA, which is raycasted in the demo using distance functions for acceleration. To improve the quality, third-order texture filtering and hitpoint refinement using binary search are included.

After the first hit is found, the screen-space normal vector is computed for shading and for the SSDM. The SSDM is not achieved using a stack of textures as this leads to problems in case of overlapping areas for large displacements. Instead, the SSDM is achieved in a post-process using a high-resolution triangle mesh with two triangles per pixel. That is the reason why sometimes articafts near the screen-boundary can be observed.

The ones of you adept in CG may play around with the shader thats included.

(Edit) Note: As the program generates the terrain as a 256MB PBO that is copied to the final texture, at least 768MB of GPU memory are recommended. 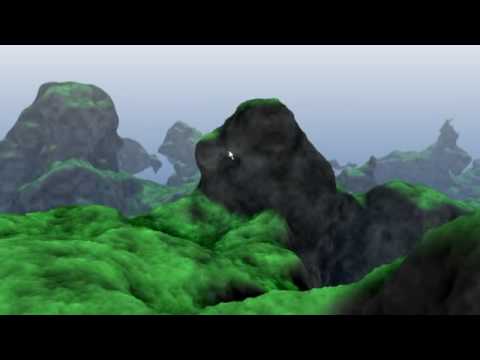