I've updated the source code to include two of the bash scripts used to create the background images. They are the directory src/Backgrounds. Note that these both depend on the ImageMagick software swuite and Fred Weinhaus' Perlin noise script.

My original idea for NaNoGenMo15 was to try to apply an analogy of the deepdreams technique to written texts. Deepdreams works by taking a neural net which has been trained to discriminate between image categores, and applying it to an existing image with the 'gain' turned up, so that it amplifies the patterns it sees and hallucinates shapes arising from the categories it has been trained on. I thought it should be possible to use a neural net which had been trained to discriminate between different kinds of text, and apply the same forced-feedback technique so that it would hallucinate texts from a randomised starting point.

This idea turned out to be beyond my abilities as a neural-net programmer - I've gotten pretty good at abusing them to create deepdreams, but have a lot to learn about desigining and training them.

Along the way, I started tinkering with Audun Øygard's deepdraw technique, which uses a different technique to produce dreamlike visualisations of single image categories which look quite unlike the acid-trippy deepdreams hallucinations. I'd adapted his code to allow visualisations of hybrid categories - maximising two or more categories rather than just one - and it occured to me that a two-stage feedback process could generate a sequence of images which were linked, as follows:

The second set S' could then be fed back to deepdraw to generate the next image. Hopefully, the images would have some visual resemblance to one another, giving a kind of pseudo-narrative flow, but avoiding a situation where the visualisation got 'stuck' on a limited set of categories.

This tendency to get stuck affected all of the early test runs - the algorithm would start off with an interesting random-looking visualisation, but after a few iterations would gravitate towards those image categories which the particular parameters of the base image and the deepdraw renderer reinforced. Lobsters, nautiluses and snakelike or wormy shapes were really common attractors. 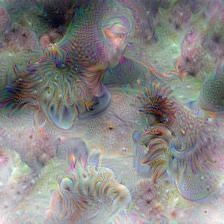 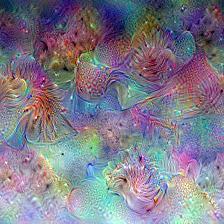 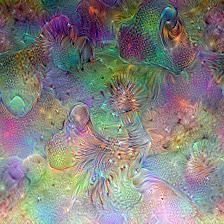 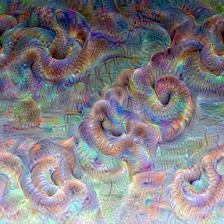 I got around this problem by adding a bit of randomness to the category selection process. Instead of taking the top N image categories from the classifier, and then rendering an image from those, the control script takes N categories, where N is fairly large (100 is the value I settled on), then picks a random sample of S of those categories, where S is a lot smaller (8 worked well). This still gives some continuity between frames, but the random sampling helps the algorithm move out of local maxima in what's a really huge space of potential images. 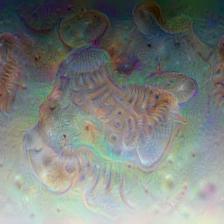 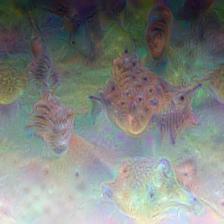 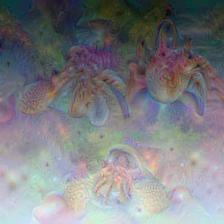 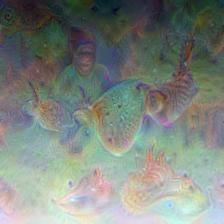 There are still some image classes which act as attractors - worms, jellyfish, snails and other marine invertebrates are really common classes, and every so often the algorithm will pass through the very large number of dog breed categories - but the algorithm doesn't get trapped in them anymore. The underwater feel of a lot of the images made me change the title from "Neuralgia" to "Neuralgae".

This was all good fun, but NaNoGenMo is about generating texts, not images: I thought a thousand weird dreamlike images could form the basis of a graphic novel or illustrated narrative. The framework for the text was the list of image classes used to generate each frame:

At first I wrote a script to pull the first few words of the top entry for a Google search on adjacent terms, but this felt a bit scattershot, and many of the searches returned copies of the ImageNet category list in the first place. I had been playing around with the Python NLTK toolkit as a way to generate texts, which led me to realise that the list of 1000 image categories which the deepdreams neural net had been trained on - part of an annual image recognition tournament called ImageNet - was taken from WordNet, a popular on-line lexical database.

WordNet is a collection of "synsets" (synonym sets) which roughly speaking map onto a concept. Each of the ImageNet categories is a synset in WordNet, and WordNet also includes a definition of each synset. I decided to use NLTK to generate a dictionary for the 1000 ImageNet categories:

Note that I included all of the different synsets attached to a single word, such as 'hammerhead'. This dictionary gave be a source text which was guaranteed to have every word in the list of image classes, and I could then put together a simple Markov chain algorithm to generate a line of 'verse' for the eight classes belonging to each image: 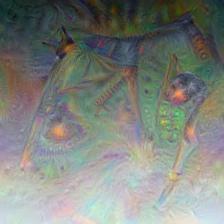 Markov text generation - or "ebooks", as it's become known on Twitter, after the famous @horse_ebooks account, which turned out to not be a bot after all - is a bit done to death, but I think that the qualities of the source text here make for fairly decent automated surrealism. Combined with the images, it's surprisingly enjoyable.

You can read Neuralgae here.

The code requires the Caffe deep learning framework with the Python interface pycaffe.

It also needs the CaffeNet and GoogLeNet neural models - I had to use both because for some reason I couldn't work out, GoogLeNet always segfaults when I use it to classify images on my Mac. I ended up using CaffeNet to do the classification and GoogLeNet to generate the images (I like GoogLeNet's output better).

It also requires the following software:

There are several more Python dependencies required to get Caffe running - these are described in detail on the Caffe website.