Flotilla is a self-service framework that dramatically simplifies the process of defining and executing containerized jobs. This means you get to focus on the work you're doing rather than how to do it.

Once deployed, Flotilla allows you to:

Flotilla is strongly opinionated about self-service for data science.

The core assumption is that you understand your work the best. Therefore, it is you who should own your work from end-to-end. In other words, you shouldn't need to be a "production engineer" to run your jobs or to access logs in case of problems. Do this with Flotilla.

Before we can do anything there's some prerequistes that must be met.

Note: When running on AWS EC2 instances or ECS it's better practice to use an IAM profile for AWS credentials

You can run the service locally (which will still leverage AWS resources) using the docker-compose tool. From inside the repo run:

You'll notice it builds the code in the repo and starts the flotilla service as well as the default postgres backend.

Verify the service is running by making a GET request with cURL (or navigating to in a web browser) the url http://localhost:5000/api/v6/task. A 200OK response means things are good!

Note: The default configuration under conf and in the docker-compose.yml assume port 3000. You'll have to change it in both places if you don't want to use port 3000 locally.

Flotilla has a simple, easy to use UI. Here's some example images for basic usage.

Define a task with the UI

The UI allows you to quickly create new tasks. 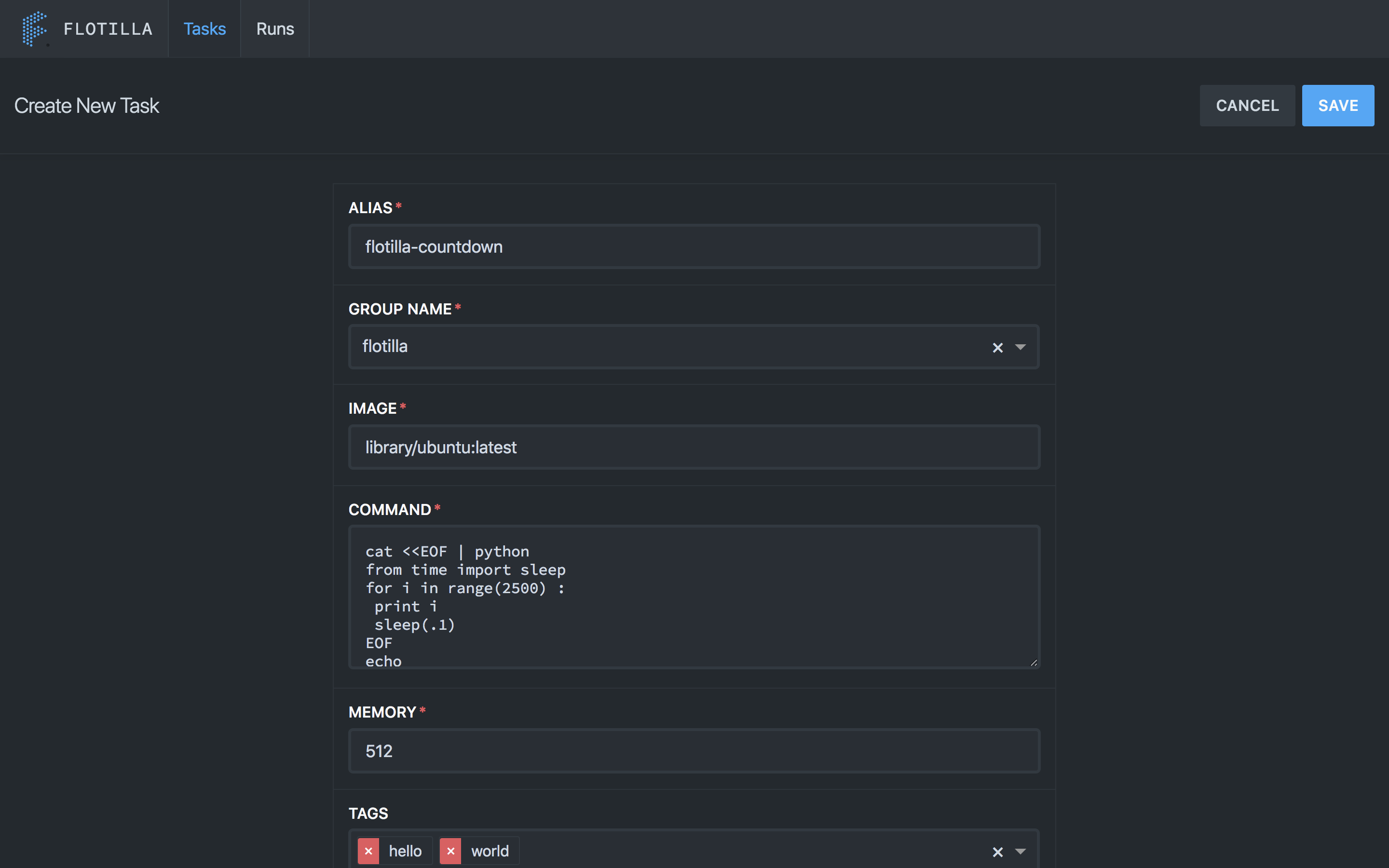 Launch a task with UI

You can run tasks you've created with the UI as well. Once you've ran a task the run will transition from Queued to Pending to Running before it finishes and shows Success or Failed (see Task Life Cycle). Once a task is in the Running state the logs should be visible.

Before you can run a task you first need to define it. We'll use the example hello world task definition. Here's what that looks like:

It's a simple task that runs in the default ubuntu image, prints your username to the logs, and exits.

Note: While you can use non-public images and images in your own registries with flotilla, credentials for accessing those images must exist on the ECS hosts. This is outside the scope of this doc. See the AWS documentation.

You'll notice that if you visit the initial url again http://localhost:5000/api/v6/task the newly defined definition will be in the list.

This is the fun part. You'll make a PUT request to the execution endpoint for the task you just defined and specify any environment variables.

Note: run_tags is defined as a way for all runs to have a ownership injected for visibility and is required.

You'll get a response that contains a run_id field. You can check the status of your task at http://localhost:5000/api/v6/history/<run_id>

and you can get the logs for your task at http://localhost:5000/api/v6/<run_id>/logs. You will not see any logs until your task is at least in the RUNNING state.

When executed, a task's run goes through several transitions

In a production deployment you'll want multiple instances of the flotilla service running and postgres running elsewhere (eg. Amazon RDS). In this case the most salient detail configuration detail is the DATABASE_URL.

The simplest way to deploy for very light usage is to avoid a reverse proxy and deploy directly with docker.

The variables in conf/config.yml are sensible defaults. Most should be left alone unless you're developing flotilla itself. However, there are a few you may want to change in a production environment.